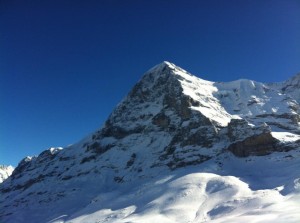 To Wengen, Switzerland, where CH and Emily skied and I walked in glittering snow among conifers laden with icy white blossom.  The views – of the Eiger, the Jungfrau and the Männlichen – were stunning and the air was nectar after the fumes of SW17.

As so often after a holiday, I came away with the burgeoning seeds of one or two ideas inspired by new encounters, experiences and sights.

After one lunch at 2,000m within the faded grandeur of Kleine Scheidegg’s Bellevue hotel, I dawdled in a corridor to look at sepia-tinted photos of mountaineers stretching back over decades.  I was struck – along with the whiff of bygone meals and cigarettes lingering in the carpets – by the imagery used in the captions.

The moustachioed men – and they were nearly all men – “fought” the north face of the Eiger, they “battled” it and “conquered” it.  The language of their climbs is that of war.   Read about mountains and they are brought alive and given fearsome personalities: they brood and tower, they dominate.  Above all, they exist to be overcome.

This is, of course, the vocabulary of long-term conditions and diseases such as cancer.   Those singled out by such misfortunes don’t ask to be victims or casualties.  They do not meekly submit to their illness, they are locked in a struggle; if they lose it, they are often said to have done so after a long and hard-fought battle.  The language used imbues them with a proud dignity: they are valiant warriors against the foe.    They certainly don’t lie down and give up in the face of adversity.

How different – I thought, as I studied the lists of those who’d fought the mountains and won (and those who’d lost) – is the language of dementia, about which I’ve written here before.  No one ever seems to “battle Alzheimer’s” or “lose their struggle with dementia after a brave fight”, though I have read a moving blog post by Kate Swaffer who talks of “fighting to accommodate the disabilities of dementia” – and how this fight to come across as “normal” tires her even as those around her (who don’t know the challenges she’s having to overcome) exclaim that nothing seems wrong.

Because the truth is: many people don’t submit to dementia any more than to cancer.  I asked one of my “virtual friends” who I’ve met through Twitter and who happens to have dementia how she manages to keep doing so very much so very well.  “I just paddle harder beneath the water,” she said.

Others play music, or sing, write poetry or blogs, or complete the crossword every day.   They “battle” not only their own condition but the ignorance and stigma surrounding it – through tiring and tireless campaigns and petitions and websites.  There is no cure for dementia but there are ways – proactive ways that don’t necessarily mean taking medication – to slow its advance.  These forms of “taking on” dementia are becoming more common and more talked about.  They are beginning to win out against their adversary.

Through guile and wit, through patience, energy and sheer determination, and with the unstinting support of friends and family, many people are living well with dementia – they are battling it and winning, at least for now.   And I salute them all.  In fact, dare I say it, I have far more respect for their courage against an enemy they didn’t seek out than for what might be seen as a rather reckless desire to climb the north face of the Eiger.

Over a beer one evening with a Kiwi guest at our charming, family-run Beausite hotel, the talk turned, as it so often does at my stage of life, to the care of elderly parents.  He told me that in New Zealand care homes for older folk are sometimes combined with maternity homes.  Think about it and it makes such sense.

New, and often anxious, mothers welcome the experience of those who’ve been through it all before.  And how better to lift the spirits of someone who’s not quite as sprightly in mind or limb as they were than to coo over a baby?  There’s a natural synergy between the two phases of life – it’s surely an idea worth exploring here in the UK.