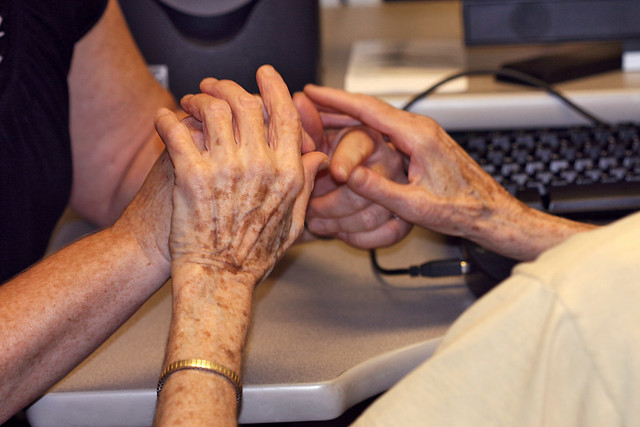 As I’ve become more and more interested in the way those living with dementia are treated by both health care systems and society I’ve realised that, given we don’t yet have a cure, the best way forward is to encourage and enable everyone who has the disease to live as well as they possibly can.   The inspirational Kate Swaffer expressed it far more elegantly when in one of her recent blogs she urged anyone who (like her) has been diagnosed with dementia, to “reinvest in life”.

Now, hopefully, it seems that this positive, “person-centred” approach may be about to take root throughout the health service.   Secretary of State Jeremy Hunt has announced that NHS patients should be treated as people rather than body parts.   To me – no doubt to Kate Swaffer and countless others trying to make a difference, such as Dementia Friends and Dementia Champions here in the UK – this latest pronouncement  from on high seems self-evident.  But it is a sign that things are changing.  For the better.  At last.

By shifting focus from “a part of the body where things have gone wrong” to “a person with a name .. a person with a family”, Mr Hunt (and they are his words) has made the first step towards ensuring that the system itself, and the processes within it, must adapt.  In short, his proposed changes will ensure that the patient is at the centre of the health system, which will work around him or her, rather than vice versa.

It all seems so obvious.  But then, it often takes time for the obvious to become the norm within monolithic organisations such as the health service.  “Person-centred” dementia care was initiated in this country over 20 years ago by Professor Tom Kitwood.  He treated people with the illness as individuals, referring  to their “personhood” to reinforce the fact that they still experienced emotions. He also introduced “dementia care mapping”, another method currently gaining traction, which involves monitoring care from a patient’s perspective to see what triggers behavioural changes – what makes him or her happy, aggressive or sad – and then using this knowledge to help lessen agitation and confusion.  Two decades on, Kitwood’s methods are being  used to reduce the amount of anti-psychotic drugs being taken by those with dementia.

In December, to coincide with the G8 Dementia Summit, I looked into how its members are tackling the disease.  I discovered that France is one of the leaders , having launched its first dementia strategy in 2001, some eight years before us.  It is now onto its third and – guess what? – its latest (2008) plan shifts the emphasis from a health focus towards seeing the patient as an individual, with a resultant reduction in the use of anti-psychotic drugs, sometimes to zero.

Recently, through Twitter and writing articles, I’ve come to know scores of people involved with dementia in various ways – some are living with it, some are carers (family or otherwise), some are Admiral Nurses, some medics, some academics, some writers, and many (if not most) combine several different roles.   Everyone I’ve encountered within this “dementia community” is passionate in their desire for those who have it to be seen as people rather than to be defined by it.  Again, this seems pretty straightforward.

But the truth is that for many not touched by this pernicious disease, the stigma remains (as it does around many mental conditions).   People are frightened of it – in recent years surveys have shown that over-55s worry more about developing dementia than cancer.   Fear leads others to turn away, to avoid facing up to what they don’t understand and don’t want to know, and so ignorance remains.

Slowly but surely this unhelpful, negative attitude is changing.   Those with dementia, and their carers, are starting to speak out – to show that they are very much more than their disease.  And social media is accelerating the conversation, allowing people living and working on opposite sides of the world to share their thoughts.

Since being diagnosed with dementia six years ago when he was just 50, Norman McNamara or “Norms” of Torquay has surely done more than anyone else to change public perception of the disease with his pioneering “dementia friendly communities” and purple angel badges that shops and businesses can display to show their support.

The dementia community is gaining strength and, all importantly, the respect it  deserves.  Governments around the world are starting to take note.  People like Norms here in the UK and Kate in Australia have voices that are powerful; their warm personalities, enviable energy and fierce determination shine through their broadcasts, blogs and writings – oh, and by the way, they have dementia.