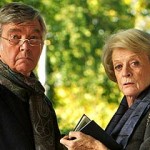 Over the Easter holidays current husband and I passed a rainy afternoon watching Quartet, the 2012 film about a colourful if not always harmonious group of residents living in a retirement home for professional musicians.

Despite its stella cast – Dame Maggie Smith, Sir Michael Gambon, Sir Tom Courtenay, Billy Connolly, the list goes on – and the heart-warming prospect of lost love rekindled over the zimmers, the movie doesn’t quite work.

Originally written as a play, its premise – of old age bringing infirmity but also (and only just in Dame Maggie’s case) a maturity of emotional understanding and a growing sense of what’s important in life – is promising but its characters are overdone.  Pauline Collins plays Cissy who has what Wikipedia calls in a euphemistic triumph, a “delicate senile condition”.   In fact, the ludicrous description is spot on, and therein lies the problem.

Still pretty, and charming and whimsical, Cissy is forgetful, obsessed with her voluminous handbag and impossible not to love.   She is the bearer of happiness, flitting about the retirement home – so stunningly beautiful that it wouldn’t look out of place in a Condé Naste Traveller magazine –sprinkling her magic like a sort of septuagenarian Tinkerbell with a benevolent streak.   If this were dementia, we’d all want a bit of it.

But setting aside the saccharine portrayal of one of today’s cruellest conditions and the idea of a retirement home with rooms twice the size of most OAPs’ bungalows, Quartet is still that rarest, most precious of things: a film of oldies, about oldies – or, as Emily calls them (or us), “the olds”. 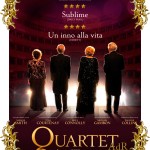 As such it’s good to watch and ponder on, once the criticism’s out of the way – and in doing so, one huge positive struck me amid the overblown flourishes.  What a good idea it is to have a retirement (or care) home for like-minded people.  It makes such sense.

The only other times in life we spend large chunks of time with those of the same or similar age are school and college, not always enjoyable periods for everyone.  But at least we’re all working towards a common end: our education.  We share likes and dislikes of teachers and subjects and peers; these things connect us and give us topics to talk about and bond over (or bitch about).

Perhaps one reason why the perception of care homes can be so negative – “repositories for our elderly”, places hidden away behind tall hedges on the outskirts of town – lies in the arbitrary hotchpotch of people who end up there.  There’s no reason, no purpose, behind the homes other than to contain the olds.

The enviable residents of Beecham House in Quartet all share a love of music.  They reminisce about past performances, they form ensembles and choirs; in singing, in playing their instruments, they keep their brains active, their fingers and vocal cords supple and their social skills sharp.  Of course, their former profession being what it is and this being a movie, they make heavenly music to accompany lingering shots of the croquet lawn.  But you get my drift.

And in a serendipitous quirk of fate, on the very day I was toying with ideas for this week’s blog along comes an expert in geriatric health to make my point for me.

Laura Bale, director of care services at the Royal Hospital Chelsea, home of the Chelsea Pensioners, has declared that the elderly should be surrounded by like-minded people in their twilight years.  She admitted she would probably be criticised for failing to champion diversity but said she had seen the benefits of her elderly residents sharing much in common.   At the risk of being shot down with Laura, I must say I can see her point.

She says the ex-servicemen gee each other along, urging others to get out and take a stroll or get dressed promptly on days when they are feeling low – doing so in the firm, military manner they all know and respond to.  “I would have to say it is sometimes more effective than when the staff try,” she adds wryly.

Another such home from home, this time for retired actors and entertainers, is Brinsworth House in Twickenham, affectionately known as “The Old Pro’s Paradise”, which has 34 places.   Though not quite in the Beecham House league of hospitality, it is good enough for the likes of Lord (Richard) Attenborough who lives there with his wife Sheila Sim.   Past residents have included Dame Thora Hird, Alan “Fluff” Freeman and Charlie Drake.

Just as Beecham House had its music rooms and platforms for performing, Brinsworth House has a stage, theatrical posters and an imposing board bearing the names of “The Noble Six Hundred”, the suitably dramatic title for those whose donations enabled its creation in 1911.  (It is now mainly funded through the proceeds of the Royal Variety Performance show).

I was also gratified to learn that my childhood town of Dorking in Surrey has a nursing home with 20 places for former journalists and their dependants.  Pickering House, funded by the Journalists’ Charity, was opened in 2007 and, along with a gym, a hairdresser and a chapel, has the two facilities crucial to any reporter worth her salt: a library and a bar.

This week has also seen the publication of a new report by the Institute for Public Policy Research (IPPR) stating that the number of older people needing care in England will outstrip the number of family members able to provide it by 2017.   In which case the demand for care homes will surely increase, no matter what the Government or anyone else says about the advantages of OAPs remaining in their own homes.

While Beecham House remains a celluloid utopia – and all the profession-based care homes I’ve mentioned are financed mostly or entirely through charitable fund-raising rather than being state-run – it is always worth looking at what works and importing best practice, where possible.

So perhaps my rainy afternoon in front of the goggle box wasn’t wasted after all.  And though Pickering House may not run to a croquet lawn, if I end up there at least I know I’ll be guaranteed a good read, a drink in the bar and – who knows? – perhaps even a couple of leads for a possible story.

My Mum
Nana forgets, so I remember