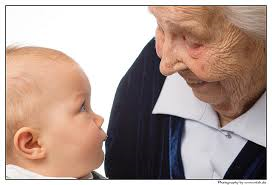 I’ve been delighted by recent reports of German day centres that take different generations, from older people to toddlers.  The idea isn’t merely practical – logical in many ways – it warms the cockles of my heart.  There’s something just so right about it.

As I’ve grown older and particularly since becoming a parent 16 years ago I’ve been struck by this country’s segregation of the generations.  Though we no longer (at least not in my circles) expect children to be seen, not heard, we do tend to keep them very separate from adults.  Don’t get me wrong, I’m a great advocate of “grown-up time” but do we need quite so much of the “them and us”?

A French friend of mine finds it inexplicable that we Brits tend to feed our children not only at different times from us but with different food.  Why, she asks, would you give your little ones tinned spaghetti hoops then sit down a couple of hours later to eat grilled chicken breasts with green beans?   She certainly has a point.

When I was in my teens my family often holidayed in France. The highlight of our stay was always the local fête, where my friend Hilary and I sashayed past les jeunes hommes in the cobbled square while mum and dad sat at tables under the looming statue of General Leclerc, sipping Pernod.   This would never have happened in Dorking, where I wouldn’t have been seen dead out with my parents on a Saturday night.

Now it seems the Germans have a thing or two to teach us about intergenerational living.  They have created centres where older people and children mix, to the advantage of both.   These “multigenerational houses” are, as the UK’s Institute for Public Policy Research (IPPR) says, “recreating some of the extended family ties that people just don’t have as much anymore”.

The mothers’ centre in Salzgitter provided the first German role model in 2006.  The idea, pioneered by the then (incidentally female) family minister was to bring together under one roof, groups that had previously operated in isolation from each other – childcare groups, youth centres, mothers’ clubs, advice centres and communities for the elderly.

These multi-tasking houses were designed to offer an alternative for older people, who often feel lonely, and for young families who need support but have no grandparents living nearby.  How familiar that sounds.

Here in the UK we are regularly presented with headlines warning us of our “epidemic of loneliness” or telling us that “loneliness is killing us”.  Only recently an American report revealed that lonely elderly people are nearly twice as likely to die prematurely as those not suffering from feelings of isolation.

In Germany, the 2006 Salzgitter model was followed, in 2012, by second stage multi-generation houses, with funding for 450 centres.  The financial support was part of the German government’s demography strategy, under which nearly all administrative districts have their own such houses.

Compare this with last year’s depressing report from the House of Lords which found that the UK was “woefully unprepared” for the social and economic challenges presented by its aging population.

“Our society is in denial of the inevitability of ageing,” Baroness Sally Greengross, chief executive of the International Longevity Centre UK, said when the report was published.  “We have put off difficult decisions for far too long”.

Germany’s example seems a good one to follow.   Its “public living rooms” are regarded as important new concepts in a modern welfare state where conventional institutional help is combined with a more actively engaged society.

They provide more than this though.   As Dr Eckart von Hirschhausen, author, moderator and patron of the multi-generation house in Berlin’s Zehlendorf district, says, “People are rarely happy on their own.  Which is why multi-generation houses are the model for the future: learning from one another, feeling needed, sharing joy. A real recipe for happiness!”

Here in the UK the IPPR has called for “universal community centres” in which activities for different age groups would take place separately but under one roof.

Clare McNeil, senior research fellow at the IPPR says that the idea shouldn’t be too costly (the German government subsidises each of its homes by about £33,000 a year) and could be achieved by bringing existing services together in Sure Start centres or community halls.

The whole thing seems eminently sensible, with many inbuilt mutual benefits.  Generations mix, the elderly provide a helping hand with childcare services even as the children themselves enhance older people’s lives.

And they certainly do.   This morning’s Daily Mail carries the uplifting story of a woman with Parkinson’s disease whose 19-month-old grandson lights up her life.  Dawn May looks after Luca two days a week: “At the crack of dawn every Wednesday, I wake to the very best sound in world: my grandson’s delighted little chuckle bursting from the baby monitor on my bedside table.”

Sixty-two-year-old Dawn says they mostly potter about together – reading, climbing the stairs, building towers and knocking them down – and when she’s finished her grandmotherly duties she arrives home “exhausted and elated”.

She concludes by saying, “I thought my Parkinson’s diagnosis heralded the end of all life worth living – instead, thanks to the arrival of Luca, I am more aware than ever of its infinite possibilities”.

Ten-year-old Annie Donaghy has become something of a YouTube sensation after speaking at a fundraiser in York about her grandma who developed Alzheimer’s at 58.

In front of an audience of 800 Annie describes how her nana is still nana – how she still looks the same, still dances to the radio, ice-skates backwards and lets her watch TV programmes no matter “how dreadful” they are.

Her description is a pithy exposition of how to regard someone with dementia – seeing nana the individual first, not just her condition, recognising what she can do, not what she can’t, helping when necessary.  In Annie’s words, “Nana forgets, so I remember”.

It’s a slogan of which any advertising agency would be proud and sums up what youngsters, with their fresh, unself-conscious, non-judgmental take on life have to offer us adults, particularly the elderly and those with dementia.

There’s definitely a time and a place for children, but perhaps we should start mixing it a bit more, follow Germany’s lead and broaden our thinking about when and where that is.    As Annie says, “Grown-ups don’t always understand the important stuff”.

Quartet: over-sweet but precious too
The Power of Stories

3 Responses to Nana forgets, so I remember