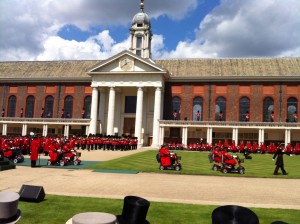 I was immensely privileged to have been invited to the Founder’s Day parade at the Royal Chelsea Hospital this week.  It took place on a bright, blustery morning just before D Day and, though I should have been prepared, I found myself ambushed by emotion as I watched the marching ranks of scarlet-suited pensioners, average age 82 years and six months.

The parade took less than two hours but the spectacle that unfolded before those of us lucky enough to be in the audience might have been the distilled essence of all that it is to be dignified, courageous, disciplined, proud and old.

That the old soldiers stood unflinching for so long, the red tails of their uniforms catching the breeze, was enough in itself.  But they stood upright, they quick-marched in pretty much perfect step within the Figure Court of the elegant hospital buildings commissioned by Charles II in 1681.

Those who couldn’t march sat on the parade ground and half a dozen or so almost stole the show when they took the salute from the Duke of Kent on their mobility scooters.  Others, too infirm to attend at all, remained in the newly refurbished infirmary.

What struck me, apart from the sharpness of their salutes (even when some of the old hands trembled involuntarily) and the obvious pride in their bearing, was how rare it is that we in this country venerate our elders, old soldiers or not.

It reminded me of a Remembrance Sunday several years ago when my dad was still alive.   He fought in the Second World War and the only time he went to church was to commemorate those who had fallen – the war, he said, had knocked religion out of him.

On this particular Sunday he was already very frail, confined to a wheelchair, but determined to go, his ribbon of freshly polished medals gleaming on his chest.  After the service as we were gathered around the cenotaph of the village church a stranger walked up to him and said, “Thank you”.  That was it; just two words.  I didn’t know what she meant at first, but dad did and his rheumy old eyes misted up.

Of course her particular expression of gratitude was for what dad had done in the war.  But why don’t we admire and acknowledge our elders more?  Why do we fettishise youth, with its lack of perspective, its frequent arrogance and lack of maturity instead of showing respect for wiser heads?  It’s true that in some walks of life we do – MPs debating in the chamber of the House of Commons, for example, sometimes defer to “the Father of the House”, meaning the longest serving Member (currently Sir Peter Tapsell).

Generally though we tend to push our elderly aside, consigning them to care homes, out-sourcing their well-being to staff paid less than my 16-year-old daughter is paid for babysitting.  Once they no longer contribute to the economy in the world of work we seem to regard people as worth less than they once were, if not completely worthless.

This is not only unkind, wrong and unethical; it doesn’t make sense.   Particularly now that we’re living to an older age and to be 50, 60 or 70 is no longer to be past it – I speak with some experience of the lower slopes here.

In Native American tribal communities, on the other hand – and in contrast to the norms of contemporary America – older people are respected for their wisdom and maturity.   Which, unlike the view we take, makes very good sense. Just because someone is retired doesn’t mean they have nothing to bring to the party.  They may no longer have a fancy job title, a full head of hair or perfect abs, but they have a wealth of experience.

In China, as in India, placing parents in a nursing home is considered dishonourable – although, since the introduction of the one-child policy in China, this tradition is beginning to break down and nursing homes are becoming more acceptable.   Progress or regression?  Discuss.

Hand in hand with Western society’s dismissive, negative view of old age is our fear of dying.   In Afro-American culture, by contrast, death is viewed as part of the natural rhythm of life (which, if you think about it, cannot be denied) and is seen as something to be celebrated.

A few years ago a Caribbean neighbour passed away.  She’d lived in our street since the 1950s and when she died her extended family moved into her house for a fortnight and enjoyed what my husband and I dubbed a “reggae wake”.  The dancing and festivities started at about 5pm and went on all night, with the family retiring to sleep off the party until mid-afternoon only to wake up and start all over again.  There was something gloriously anarchic and joyous about this happening in a leafy part of London more normally associated with bankers than rastafarians, though I must admit that after a few nights of Bob Marley pounding out his bass grooves across our garden at 4am the “natural rhythms of life” lost some of their appeal.

But what is it that these other cultures have managed to retain today that we’ve somehow lost along the way?  I don’t have the answers, but I’m beginning to realise as I stride further into my 50s, and with the deaths of both my parents lengthening the shades of my own mortality, that the present way certainly isn’t right.

Watching the Chelsea pensioners standing to attention, knowing the effort of will that it must have taken many of them simply to stand for so long and thinking of the pain and fatigue that they’ll have suffered the following day – and then realising that this was nothing to what they’d experienced 70 years before – was humbling.

More than that – and more than the immense gratitude for what these old soldiers did so that you and I could live and speak and write and argue as freely as we do – those two hours reminded me that the elderly in our society surely deserve far greater respect than we currently show them.

Normalising Dementia
Memory – the sum of our past