Memory.  Even before I began to write about dementia the subject fascinated me.   At university I studied for an English degree that included post-structuralist readings of the Romantic poets (don’t even ask) and decided, in my 22-year-old wisdom, that memory as such doesn’t really exist. 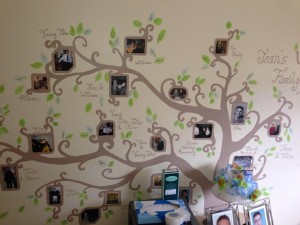 @trainingcarers Imagine big days in your life & the people you love all on your wall in a beautiful mural. #deardementia #carersweek

What happened, I argued in one particularly tortuous essay, was that when we remember something we dismember it only to – literally – re-member it.  In other words, we recreate or reconstruct our past.

Now, in light of what I am learning about the treatment of those with dementia, my “Pseud’s Corner” musings are taking on a new, more useful meaning.

It is being widely recognised, rather belatedly, that the best dementia care is person centred – that is, seeing the individual first and then their dementia.  Written like this it seems extraordinary that we don’t all – let alone medical and care professionals – do so automatically.  But therein lies one of the many cruelties of having dementia: its ability to make others see you differently, thus nurturing the fear and lingering stigma that all right-thinking people want to eradicate.

I liked the compelling simplicity of a presentation slide recently tweeted that said simply “PERSON with dementia” not “person with DEMENTIA”.   I like to think that the late Tom Kitwood, who pioneered person-centred dementia care back in the 1990s, would be delighted with this.

With a person-centred approach comes life story work – building up biographies of people living with dementia through all the different facets that make them who they are – their family and friends, their former work, their likes and dislikes, their hobbies and communities.

Their life is recorded, not as Wordsworth might have done in The Prelude (for which many might breathe a sigh of relief), but in a framework that enables those working with them to deliver care that is centred on each unique individual.   In a sense – in my disappearing-up-my-own-backside undergraduate sense but with a more constructive outcome – their memories are being re-membered or reconstructed for them by those who know and love them best.

As an added bonus, because the recording process is collaborative – with family and friends taking part and providing photos and images to bring individual stories to life – it is rewarding and beneficial in and of itself.  As one family carer said, “Doing life story work with my husband has made a difference to our relationship.  I thought we had nothing in common these days but doing the life story made me realise we had a lifetime of experience and joy.  My husband loves looking at the photos of us all”.

Before she became too ill my mum loved looking at photos of us all when we were younger, and I wish I’d sat down with her more often and talked about what she could remember while she could still remember.  I’m haunted by the moment, a few days after she’d moved into her nursing home, when she sat in the garden and told me she’d cried herself to sleep the previous night because she couldn’t remember her life.

Recovering, re-membering lost memories through the use of memory triggers, forms a valuable part of good dementia care and now more and more innovative ways are being found to forge invaluable links.

Training for Carers tweets some pithy and thought-provoking ideas.  A recent one featured an imaginative method of presenting someone’s life story: “Pls RT All the big days of your life & the people you love on your wall as a beautiful mural” together with a photo of a painted tree of life showing just that.  How clever, and neat, and – more importantly – dementia friendly.

A care home in Ireland has gone one step further.  At Kiltipper Woods in Tallaght residents have created a Friendship Tree by bringing a 6ft tree in from the garden and festooning it with mementos that hold special meanings.

Ribbons tied in bows remind one lady of attending dances when she was younger, of dressing up and putting on her make-up.   Her daughter is going to bring in some golf tees to hang on the tree because golf was a big part of her parents’ lives.

I have just come across @kimfribbins on Twitter.  She makes memory quilts.  Her profile picture features, not her, but bespoke quilts stitched together with the dates and photographs of those close to the person with dementia or memory loss.  Not only are the patchwork pieces beautiful, practical and comforting, they also provide immediate conversation starters for family and carers.  What a fabulous idea.

In 2008, spurred on by her mother’s decade of living with dementia, Sarah Reed created “Many Happy Returns” chatterbox cards.  Each set contains 26 memory trigger cards from the 1940s to prompt conversations.   A 1950s set was launched in September 2010 and the cards can now be found in over 3,000 care homes, community and day centres, hospitals, schools and family homes around the country.

The first entry in the feedback section of Sarah’s website reveals the value of the cards for those with dementia.  It tells of a woman who, collecting a relative from a dementia club, noticed an elderly lady sitting alone.   The woman sat down and used the cards (which she had brought with her intending to offer them to the club) to start up a conversation between herself, the club’s organiser and the old lady.

Prompted by the cards, the OAP began to chat and it emerged that she had been a shorthand typist and that her fighter pilot brother had been killed during the war, something about which she was still, years later, very upset.  It transpired that this was the longest conversation that the club’s organiser and the elderly lady had ever had.

Dementia campaigner Beth Britton wrote a blog a few years ago entitled Don’t Forget to Remember (scroll down to 11 Oct 2012).   The title alone made me want to read on.   When I did I discovered a typically lucid exposition of the power of reminiscing.

Beth makes the very good point that most of us (whether living with dementia or not), have moments when we yearn for our carefree youth.   So it’s a mistake, she argues, always to try to drag people with dementia into the present – which they may well find confusing or frightening – and instead we should join them in their past.  Which in many ways of course has become their present.

And so I return full circle to my student undergrad discourse and what constitutes memory, what constitutes us.  I return to the “me, myself, I” of who we each are, which is in no small measure the sum of our past.  All of us should surely do everything that we can, however we can, to help people with dementia keep hold of this precious thing, this sense of self.

As Professor Kitwood said in 1992, “As we go through life we build up a personal history with its unique mixture of joys and pleasures, sadness and pain. Our sense of who we are is linked to that history and if we lose that history, we lose something of ourselves. For a person with dementia who is losing their memory and trying most of the time to make sense of who they are, a life story book can be an atlas, the compass, the guide to finding their self.”

I’d like to think that even my verbose, rather too cocky, undergrad self wouldn’t have had the nerve to add to that.  But then again, who knows?

Dear Dementia by Ian Donaghy of Training for Carers is out on 16 June, published by Hawker Publications.