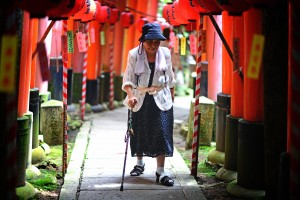 When I heard about the three different eras of dementia that have occurred in Japan – a country whose treatment of those living with the condition is said to be one of the most progressive in the world – I was intrigued and vowed to learn more.

It’s taken me a few weeks but I now know that the first era, the era of the cure, happened during the 1980s, when people with dementia were commonly regarded as no longer able to understand, placed in care homes and given medication.

The second era, the era of care, came in the 1990s, when a form of sub-standard person-centred care was introduced to enable those with dementia to live their life with support from others.  Although this era was laudable in its aims and marked a profound shift in approach, the pioneering treatments (such as music, reminiscence and art therapies) were foisted on care homes without any thought being given to what their residents might actually want.  There was no “reciprocal purpose”.

The third, current, phase is known as the era of reciprocity, where people are regarded not as care givers and care receivers but as treasured partners.  I immediately warmed to the Oriental-style respect inherent in this phrase.  Emphasis is placed on everyone sharing their lives, on those with and without dementia influencing and being influenced, inspiring and being inspired.  The approach is not one way or unilateral, but equal.

When I discovered all this – through Karin Diamond’s insightful report of her month-long trip to Japan to research theatre and memory work with older people – I experienced a flutter of recognition.   It seems to me that though Japan’s enviable approach to those with dementia may not be mainstream in this country, many of the inspirational individuals I’ve recently met (and blogged about) are living, walking and breathing straight into a new era of reciprocity right here in the UK.  Now it’s up to others involved in dementia care to follow in their footsteps.

Karin, who has worked in theatre, film and TV for over 20 years, runs Re-Live in Cardiff with Alison O’Connor, a trained cognitive behavioural counsellor.  As well as their innovative documentary drama and life story work with older people, the pair train professionals working with those who have dementia, using the reciprocal practices that Karin witnessed in Japan.

The testimonials on their website and the descriptions of their work offer no sense of passive recipients of enforced care, but rather an interaction between residents and staff, where, according to Dan Morgan, a former Cardiff care home manager, “even people with the most advanced dementia are able to contribute to and gain from meaningful activities”.

Re-live isn’t operating in a vacuum.    Dementia Care Matters, which provides support, training, resources and research throughout the UK, is committed to breaking down the barriers between carer and cared for.  Sally Knocker, one of its consultants, believes that reminiscence provides a wonderful opportunity to do this.

“We get staff involved – we ask them to bring in three objects of importance in their lives because we want them as individual people, not as staff.   Through reminiscing, connections are made and friendships are forged”.

It’s interesting to compare Sally’s words with those used by Karin Diamond in her Churchill Fellowship film report about her trip to Japan, where older people live in small, group homes and staff ensure that they know the history of each individual resident by visiting places of significance to them in their previous life.

“An in-depth understanding of the person leads to the residents and staff becoming irreplaceable for one another,” Karin explains.  “And residents are friends who live the rest of their lives under one roof”.

Her accounts of life in these small Japanese group homes tell of the ebb and flow between residents and staff.   When an old lady visits her family grave she becomes upset.  The staff member accompanying her places an arm around her but later admits that she didn’t know what to say – but also that “she felt in touch with this woman’s existence and couldn’t help but think of her own existence and life”.    As Karin observes, “Humanity is fostered in the warmth of interpersonal relationships”.

Karin’s striking description of one woman being in touch with another’s existence and, through this, somehow reaching into her own self and her own life, brought to mind a third woman I’ve recently encountered here in the UK.

In 2007 Susanna Howard, an accomplished actor, producer and writer, created Living Words, an arts and literature organisation whose work “enables individuals to feel heard and understood, even when communication seems lost.”

Her passion and enthusiasm is apparent from the moment she opens her mouth and talks – fluently, wittily, cleverly and very, very fast – about what she does.   Susanna and her associates work on a one-to-one basis with people with dementia, listening to their stories, recording their words and “connecting through emotion”.

“You listen at a different level,” she explained to her audience at a recent event.  “Behind the words you hear different things.  It is a validation of how the person feels”.

The Living Words website reveals how much its philosophy towards those with dementia mirrors Japan’s.   Running through many of the descriptions is an interchange (refreshingly devoid of “them” and “us” labels) between those without a voice, noticeably those with dementia, and those working with them.

Susanna turns the words garnered from residents in care settings and communities into publications and plays, thus placing the vocabulary of those with dementia literally centre stage.

The promotional material for Weave, which she created in 2012, describes it as “One woman’s experience of working with people with dementia – and the words that changed her life”.   The interplay between the inspirer and the inspired, the influenced and those influencing her, is subtly yet surprisingly made: it is the change in Karin’s own life that is mentioned, not the difference she surely makes to the lives of those with whom she works. 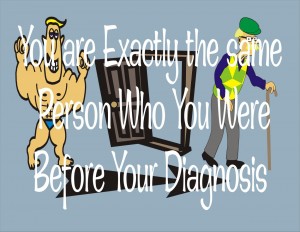 In my guest blog about a dementia innovations conference in London I spoke of Ken Howard, biker extraordinaire, who participated in a PechaKucha session with Gill Phillips of Whose Shoes?  Ken, as many readers will know, lives with dementia, as does Dr Trevor Jarvis, another of the day’s stars.  The placing of these two people at the heart of the event said much about it and about our growing sense of reciprocity – our growing determination here in the UK to listen to and learn from (rather than care for in an overly paternalistic or patronising fashion) people with dementia.

At the end of her fascinating account of her Japanese trip Karin Diamond draws several personal conclusions which are worth repeating and which, in the spirit of the report itself, apply equally to those with dementia as those without.

The first is that we each undergo a lifelong personal development that continues until the very end of our existence.

Secondly, that as their condition progresses those with dementia lose awareness of their connections with other people and even with themselves, so that it is as if they are deprived not only of their identity but of their existence.

The frightening prospect of Karin’s second conclusion is to some extent offset by her third, which is that a respect for the connections between us allows us to feel the existence of others and, importantly, ourselves (as shown by the carer’s experience at the family grave).

Fourthly, there is always something new to be gained from sharing experiences.

I’ve mused several times in my blogs about the passionate, energised change-makers I’ve been privileged to encounter since becoming involved with what I call the dementia community.  Our group includes people living with and without the condition.  Most (if not all) of us have been touched by the condition in one way or another and are determined to raise awareness of what it is, lay to rest the stigma that still surrounds it and help to create a world in which it is possible for those who have it to live as well as they possibly can.

The dementia friendly community – both the smallish one of which I’m a part and the greater one that constitutes society – is about human connections.  It’s about forging new relationships and nurturing a mutual respect for each other.  It’s about humanity, I realise, as I take in Karin’s report of her trip to Japan.  Nothing more and nothing less. 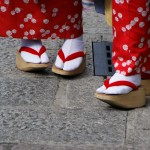