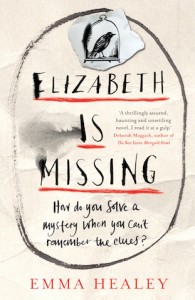 Elizabeth is Missing is an unusually bold and clever novel: a 70-year-old mystery narrated by an old lady with the beginnings of dementia.

Maud is funny and sharp.  She is observant and self- aware.  She is also living through what must be one of the most frightening stages of her condition: she knows that she is forgetful and that others, including her middle-aged daughter Helen, think she is mad.  She isn’t.

Through the witty, perceptive writing of author Emma Healey, we inhabit Maud’s head, we see through her eyes and hear through her ears: we experience the world as she does and come as close as anyone without dementia possibly can to knowing what it’s like to live with it.

And we realise very quickly that Maud also knows that her friend Elizabeth is missing.  She knows because the countless notes she is constantly writing herself (which she calls in a wonderful example of her occasionally still sharp wit her “paper memory”) tell her so.

On one very over-simplified level Elizabeth is Missing could be read as a Dementia Friends’ manual showing what it’s like to live with the condition, written by a mistress of the “show not tell” technique beloved of every creative writing course.

Take this early passage in which Maud’s irritation at Helen refusing to believe that Elizabeth is missing bubbles over into anger.

“I’m tired of the sympathetic smiles and the little pats people give you when you get things confused, and I’m bloody fed up with everyone deferring to Helen rather than listening to what I have to say.  My heartbeat quickens and I clench my teeth.  I have a terrible urge to kick Helen under the table.  I kick the table leg instead.  The shiny salt and pepper shakers rattle against each other and a wine glass starts to topple.  Helen catches it.

“I don’t answer; my teeth are still tight together.  I feel I might start screaming, but breaking something, that’s a good idea.  That’s exactly what I want to do.  I pick up my butter knife and stab it into the black side plate.  The china breaks.  Helen says something, swearing I think, and somebody rushes towards me.   I keep looking at the plate.”

The almost intolerable frustration of someone with dementia, other people’s lack of understanding and a carer’s stress are all contained in this vignette.

But the novel is far, far more than a close examination – astute as it is – of what it is to have dementia.  It’s a sensitive exploration of the complexities of a family, of sisterly tenderness spiced with envy, and of what happens when a sudden event blows a hole in everyday life; it’s a haunting portrayal of wistful old age with its yearning for youth and its flickering memories of what once was.  Above all it’s a suspenseful mystery with a cast of well-drawn characters, an intriguing plot and some superlative writing.

Dementia, it has to be said, is a useful literary device for any work of fiction because it allows the author to skip from present to past with almost wilful abandon, just as Maud’s mind does.   Healey’s light touch, her attention to detail and the deft way with which her writing segues to and fro, from now to then, from age to youth, as the story unfolds are what make this book special.

Maud, still innately intelligent in many ways, struggles with simple tasks, such as making a cup of tea and setting the table.  As she mimics the action of cutting food in her attempt to remember which side the knife and fork should go, Helen walks in and asks what she’s doing, chivvying her, embarrassing her.

“I don’t look up.  It’s such a little thing – knowing where to put cutlery – but I feel like I’ve failed an important test.  A little piece of me is gone.

‘It looks very nice,’ Helen says, her voice too bright.  She walks round the table and I watch her out of the corner of my eye.  I see her look at me.  I see her hesitate and then quickly swap the knife and fork.  She says nothing.  Doesn’t point out my mistake.

The sense of loss, the brittle nature of a once familiar mother-daughter relationship strained to breaking point by Maud’s dementia are all distilled in this mundane little scene.

And all the while, as Maud’s world becomes our world and her frustration at not being listened to, not being believed, is translated into our own, ancient clues to the ongoing intrigue are being plucked from the past and dropped into the story like preserved maraschino cherries into cake mix, building the suspense and driving the narrative towards its decades-old denouement.

“How do you solve a mystery when you can’t remember the clues?”  The tantalising strapline on the book’s cover drew me in and made me turn the first page.  From then on I was hooked, not just on the storyline, but on Maud – on being utterly and completely inside her head and on appreciating as I’ve never done before what it’s like to have dementia.

In her remarkable debut Emma Healey presents us with an assured and intriguing  psychological whodunnit of a novel.   But she does something much more.  She offers us, on the side as it were – lightly, chillingly and oh so cleverly – a penetrating insight into what it’s like not to remember the clues to living your life, to live in a cloud of confusion, hovering between then and now, between the past and the present, to know that other people think you’re mad, and to know that you are not.   It is an extraordinary and compelling book that everyone should read.

Elizabeth is Missing by Emma Healey is published by Penguin, priced £12.99.  In January 2015 it won the Costa First Novel award.

Emma’s second novel Whistle in the Dark will be published on 3 May 2018 by Viking.

Cure. Care. Humanity.
The unending grief of the dementia carer