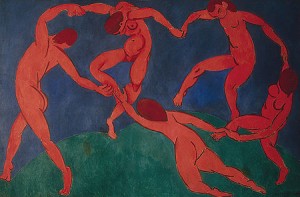 The Dance by Henri Matisse is one of a pair of panels known as The Dance and Music, and is housed in the State Hermitage Museum in St Petersburg

Rachel Mortimer is an artist.  She is also a qualified Montessori teacher and, among other jobs she’s held, she’s worked as a carer.  At the moment she’s studying for an Open University psychology degree.  She’s clearly someone with many strings to her bow.

But the reason we’re meeting – and what could be seen as the natural culmination of the various facets of this 35-year-old woman – is the social enterprise she set up a couple of years ago.  Called Engage & Create, it’s dedicated to improving the quality of life for people with dementia and those who care for them.

Rachel describes how the enterprise came about on one of her own blogs.  “I was invited to teach some painting in a care home. As I walked through the door I was confronted by an unpleasant smell, silence in a room of thirty residents and the odd scream. This was a dementia specialist care home and nobody had told me”.

Others might have walked away.  Rachel sat down and, daunting as it doubtless was, attempted to talk to some of the residents, using art and paintings – the reason, after all, why she was there.   Little by little, with eye contact and touch as much as words, she began to engage with the elderly people.

The key, she later realised, lay in having something concrete to focus on and talk about, and thus the idea for Engage and Create, for which Rachel has since won an interest-free social enterprise loan and been awarded a business mentor, was born.

It began with Ignite sessions, in which armed with her Ipad, Rachel used images of paintings and sculptures to talk to and spark reactions with those whose dementia had robbed them of coherent speech.

Other than music perhaps, there scarcely seems a better medium for these sessions than art, which touches peoples’ emotions and feelings – the very parts of those with the condition that remain accessible.  In the words of Richard Taylor, a man far wiser on the subject of dementia than I can ever hope to be, Rachel draws “from the inside out”.

Rachel’s instinct, fostered by her Montessori training, is to focus on the positive and create what she calls “a failure-free environment”.  A key tenet of the teaching technique is to draw out a child’s unique strengths by concentrating on what he or she can do, not what he or she can’t.  Put another way of course, it’s child (or person) centred care.

Confronted with an elderly woman who had barely spoken for six weeks, Rachel showed her The Dance, a lively painting of interlinking figures by Henri Matisse, and asked her what she thought of it.

Rachel had been hoping for perhaps a flicker of reaction.  To her amazement the woman said quite clearly, “The mood and the colour move right through me”.

The emotion, the words, the connection were all there – drawn from the inside out, through the immediacy of art.  Do take a look at the State Heritage Museum’s website, where the description of the painting is uncannily similar.

Immediacy is the art form’s other great benefit for those with some degree of cognitive impairment.  We all see a painting or touch a sculpture right here, right now, this very moment; it doesn’t have to be remembered or read.  The fact that art exists to be seen and appreciated by each of us in our own different ways, each time we see or hear it, is as true for someone with dementia as someone without.

Engage and Create does what it says on the tin – and more.  It’s a clever name with a hidden depth.  Because it strikes me that that Rachel’s techniques (which also include creative and reminiscence workshops to provoke discussion and engagement as a precursor to hands-on creative activities) allow people to create far more than paintings or sculptures, satisfying as their production may be in itself.

The art – talking about it, producing it, using it to elicit some sort of response – can be viewed as a means to something far more profound. I see it as a means back to, or into, the pre-dementia self – a way to recover the sense of identity that so many people with the condition say they fear losing.

Since 2006 the Museum of Modern Art in New York has been running something very similar to Rachel’s Ignite sessions.  Monthly Meet Me at MoMA programmes offer those with dementia and their families and carers the opportunity to come to the museum and discuss a specific work of art with trained gallery staff.

A regular user of MoMA’s sessions (a man with dementia) said they made him feel “younger, more vibrant, more connected with the world”.

It is this lasting impact, this reconnection with others, with life, with the wider world, that is so important – and it seems to be something shared by the various enterprises designed to improve the lives of those with dementia that I’ve discovered as I’ve started to write about the condition.

From Dementia Adventure’s energetic outdoor activities to Ken Howard rebuilding his trusted Harley, from the man at MoMA being reconnected with the world to the woman who, through Matisse’s The Dance, found the voice she’d lost, the common thread is the notion of people returning to something familiar, achieving something they’d used to do but now seems beyond their grasp.

With Engage and Create Rachel is using her skill as an artist and a Montessori practitioner to reach the parts that others can’t.

Each pocket of innovation – whether it involves music or reminiscence, painting or poetry – is another example, however small, of someone or some group of people or GPs or artists or entrepreneurs treating those with dementia as individuals who still have a heart, a core, a life that can be touched.

The trick lies in finding how to reach that inner soul, how to draw it from the inside out.  The more people who, like Rachel, are trying to do so, the better it is, for all of us.

In fact Rachel is already scaling up.  She’s linking with more and more art galleries and offering training to care homes in order that they can deliver their own sessions.

So if you’ll allow me a moment of indulgence to dream (it is my blog, after all), I’d like to think that in time these small inspirational enterprises scattered around the country will proliferate as people talk, word gets round, pieces are written, ideas spread and tiny pockets become pools of practice, no longer innovative but the norm.

4 Responses to Drawing From The Inside Out