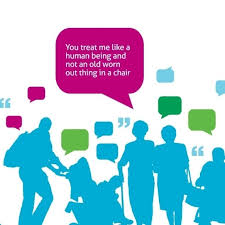 At the end of a White Paper on change and transformation in the NHS comes a case study from Cornwall and the Isles of Scilly.  It involves a seemingly simple, grassroots project called Living Well, in which older people have collaborated with voluntary sector partners, local GPs, community nurses, and mental health and social workers to take control of their own futures and live as well as they can, as they want to do.

The case study is presented in the form of a film that kicks off with Pat, an Irish woman, explaining what Living Well means for her.  Asked what her life would be like were the scheme to be removed – if the rug, as her invisible interrogator puts it, were pulled from under her feet – she comes up with a wonderful Irish answer.

“I’d be back on lino, you know, because if the rug is gone from under my foot, then the old lino is underneath that, and lino is cold and bare and hard.  And that’s where my life would be again.  The comfort, the extra little bit that makes it special, would be gone”.

For me, the image that Pat describes in her gentle, lilting voice provides the perfect summary of an enlightened piece of work by health professionals Helen Bevan and Steve Fairman.

This is appropriate because the main message of their paper is that the large-scale transformation required if a hard-pressed NHS is to surmount the monumental challenges it faces will come from a different sort of change from that which we’re used to. This new form of change – which uses what’s called an “emerging direction” approach – will supplement the existing “dominant approach”.

To summarise as best I can, the dominant approach relies heavily on hierarchy and the sort of authority that comes from one’s position in an organisation. The new, emerging direction approach comes from the grass roots, from collaboration between diverse groups, from networks, shared purpose and emotional connections.  From changing people (and their mindsets) not structures.  From what cynics might call the “soft, fluffy stuff” not the hard stuff; from what Pat calls the rug and not the lino.

I should say at once that, unlike the paper’s authors, I am very far from being any sort of health professional.   I am a writer.  The closest I’ve come to understanding the ins and outs of the NHS is as a patient and as a carer to my late mum and dad.

I’m taking the liberty of writing about this particular White Paper because it contains elements that interest me.   And I’m pretty sure (unless I’ve got it all horribly wrong – always a possibility) that others whose only detailed knowledge of our health system is the same as mine, that is as its users, will share my interest.

So, in the spirit of the report itself, which describes itself as a “seek, sense, share curation effort”, I’m aiming to share what I’ve discovered.

In the few months I’ve been blogging about the elderly and dementia I’ve encountered (both in the flesh and on Twitter) enough disruptors, boat rockers and radicals in my sector to know that I like them and relate to them.   Imagine my delight then when the people the White Paper says will enable the new sort of change it envisages for the NHS are just like my new friends – non-conformist outriders operating at the edges of the organisation.

Helen Bevan and Steve Fairman are talking about individuals “capable of working with others to create success, NOT destructive troublemakers”.  They say these people “may hold the key to the kinds of transformational change approaches that health and care organisations need for the future.  Leaders should seek to identify them and engage them in the organisation’s most significant challenges”.

Step forward and take a bow Gill Phillips, Shibley Rahman, Sarah Reed, Beth Britton, Ken Howard and Kate Swaffer, a clutch of specialist dementia nurses, a sprinkling of doctors, and countless others, too many to mention, all of whom I’ve met on Twitter (some of whom I’m delighted to say I’ve now met in person), who could be said to fall into this category.

Many of those I’ve mentioned don’t even work in the health and social care sector, but they are all making constructive waves in their own distinctive way.  Some are “rocking the boat whilst staying in it” to coin a phrase; others might be said to be outside the boat, rocking in.  In the new era of change this doesn’t matter; in fact it’s very much part of the game.

As the paper states, “Cohesive networks made up of people with similar interests, professional backgrounds and interests are best for delivering small scale incremental change.  However, if we are seeking large scale, transformational change, we should be building ‘bridging’ networks that connect disparate individuals and groups that were previously disconnected”.

At this point Gill Phillips aka @WhoseShoes might like to take a little curtain call of her own as she’s the best networker I know (and I know a fair few).

But to return to where we began – to Irish Pat’s experiences of the Living Well scheme.  Hers is the compelling story of an extraordinary project that started life in 2009 as a small-scale pilot of 100 older people in Newquay with two or more long-term conditions and is now, in the words of Dr Matthew Boulter, one of the practitioners involved, “exploding beyond our wildest, most exciting dreams”.

And how did it happen?   To what does it owe its success?  The answer, as the White Paper says, is by public sector providers and commissioners – who for too long had been focussing on fixing health and social care  conditions rather than individuals – talking and listening to the older people themselves and helping them to live their lives.

Volunteers were trained in motivational interviewing and self-care techniques so that they could have guided conversations with people in their own homes, listening to their stories and understanding their motivation and requirements.

Early on, the team mapped out over 670 local groups and charities in west Cornwall and identified 48 “community makers” (existing facilitators of social activity and connectivity, such as lay pastors, charity leaders, police, councillors and schools).  They held regular workshops involving the community makers and constantly concentrated on what was important locally, drawing locals in to help provide solutions.

The White Paper is clear about why the project succeeded:  “For the team in Newquay, the ability to change really hinged upon developing personal relationships and having conversations.  The team developed a shared purpose to do things differently and lived that experience in the way that they behaved.

“The most surprising factor was the change in people, from the individuals whose lives have been transformed to the GP who says she has ‘more magic to offer’ and the volunteers who say ‘if the funding runs out, don’t worry – we know what to do now’.  The team’s quiet revolution is affecting everyone”.

The scheme ticks all the boxes of an emerging direction approach: grass roots, collaboration, networks, shared purpose and emotional connections.

For those who regard this story as the fluffed-up, over-inflated claims of a few enthusiastic individuals, hard statistics may be more convincing.   An evaluation report of the Newquay pathfinder project revealed its positive impact, including a 30pc decrease in emergency hospital admissions, a 23pc improvement in quality of life and an 87pc satisfaction rate among practitioners.

The Newquay pilot and the Living Well project it spawned embody the large-scale transformational change the White Paper says is required for the NHS and shows – another theme of the paper itself – that little ripples can have a big impact.

If my blog provides even one tenth of one tiny ripple I will have played some part in this quiet revolution and it will have been worth me writing it – and you reading it.