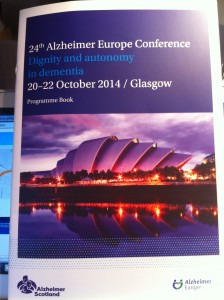 The tone of the 2014 Alzheimer Europe conference was set from the moment I arrived and bumped straight into the force of nature that is Helga Rohra.

I’d read about this 60-year-old German – and listened to her powerful words – many times, but never met her in person.  She was bustling about, organising others, clearly in charge and after a swift exchange of words I let her go. She was far too busy to talk for too long.

Helga chaired three sessions at the Glasgow conference and participated in many more.   Such is her energy and panache that she seemed to be everywhere.  Her mark, her imprimatur – and that of the other 44 people with dementia attending the event – was well and truly stamped on it.

I’d expected those living with the condition to be at the heart of a conference entitled Dignity and Autonomy in Dementia where, on the opening night, an historic Glasgow Declaration to that effect was signed; I hadn’t realised quite how loud and clear their voices would be.  More fool me.

For Scotland is of course the home of the Scottish dementia working group.  Created in 2001, its members all have dementia and it was years ahead of the rest of the world in giving a voice to those with the condition.

An hour or so after I bumped into Helga, the Scottish Government’s acting director of health and social care integration, Geoff Huggins, would tell conference about the working group’s forcefulness and impact on government policy.  With hindsight, I should have realised that in Glasgow those with dementia could be nowhere else but centre stage.

The big guns – politicians, CEOs and the like – are generally rolled out to open these sort of things, and all too often in my experience their speeches are over-glossed with a veneer of sound-bites and unrealistic rhetoric. 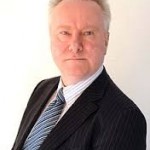 Glasgow’s firepower came in the form of Scottish Health Secretary Alex Neil.  His late father had Alzheimer’s – and the politician’s speech was shaped, for the better, by his experience.

The Health Secretary spoke of the importance of involving people with dementia in policy-making decisions.  “A key part of any successful dementia strategy is to involve them, not just in the delivery, but in the implementation and formulation of the policy”.

His speech was from the heart, from someone who had seen his own father live through that distressing period of the condition when he knew that something was wrong, but didn’t know what.  It was the speech of a person who understood, as he said to cheers from the hall, that “the primary motivation in the drive towards understanding and curing dementia is humanitarian”.

This person-centred theme ran through the conference like words through a stick of Brighton rock.  It informed every presentation I saw, each contribution I heard.

From the zest and passion of Susanne Rishoj (scroll down the link to find her) who runs dementia dances in Denmark because “the body remembers what the mind forgets” to the green care farms of Holland and the Netherlands (again, scroll down).

These farms mark a radical change in the concept of care, with the emphasis on smaller groups of seven or eight people with dementia living in a “household” with a nurse.  Here, tasks are shared as they would be in an archetypal home.  It’s a fascinating model about which I plan to write more in future.

Innovation, energy, optimism are all words that spring to mind when I think of the Glasgow conference.  But most of all I remember it for so naturally and obviously placing people with dementia right at its heart.

Nowhere was this more apparent than in the session where members of the European working group of people with dementia presented snapshots of their lives.  It was full to bursting,  the doors left open so that people standing in the corridor outside could hear what Scotland’s Agnes Houston, Jean-Pierre Frognet from Belgium and Nina Balackova from Czechoslovakia had to say about living with the condition.  Helga, crackling with energy, chaired it in her inimitable style.

Agnes, one of the guiding lights of the working group, spoke of her eight-year race with dementia.  “For a long time I was trying to outrun it,” she said.  She now describes her experience more positively.  “I have dementia. Dementia doesn’t have me”.

In another oversubscribed workshop 60-year-old Ken Howard, diagnosed with Alzheimer’s eight years ago, explored (with his colleague Gill Phillips) how others can support people with dementia. 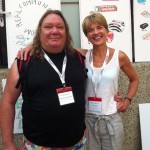 Ken Howard & me at another (warmer) conference

Ken, a gentle giant of a man of whom I’ve written before, asks others to help by “passing the salt when it’s out of my reach” – that is by aiding him, and others like him, in common-sense ways which encourage independence and confidence, rather than taking over control, which doesn’t always help.

On the final day, over tea and yet more biscuits, I bumped into Jean Georges, executive director of Alzheimer Europe, and asked him what one message he would take away from the conference. That governments of the different European nations must work together for integrated solutions so that we don’t all keep re-inventing the wheel, was his answer.

It made sense to me.  Time and again as I talk to and write about people with a passion for raising awareness of dementia, reducing the stigma surrounding it and helping those with it to live their lives as well as they can – from Tim Lloyd-Yeates to Rachel Mortimer, Sarah Reed and Zoe Harris – I keep encountering the same principles and themes.  They are simple, person-centred and common-sense – and they occur in isolated pools of best practice.

In the closing sentences of a recent blog I spoke of my hope that these tiny pockets would spread to become the norm.  In a sense I was echoing, in micro or local terms, what Jean Georges said.

Conferences – the best conferences – are intense, stimulating, provocative experiences whose effects and influences reverberate long after the delegates have wended their way home. So it was with this one.

I’ve no doubt that it will spawn many more informative articles and blogs (not least from me).  Today I simply wanted to capture that post-conference glow, to linger in the moment a little, to reflect on a whirlwind couple of days.

And the one message that I (a far smaller fish than Jean Georges) take from Glasgow is that people with dementia have found their voice and are beginning to use it to great effect.  It’s up to the rest of us – be we writers, innovators, entrepreneurs, health and social care workers or policy makers – to listen and then, to act. 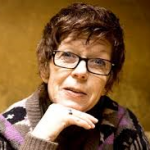 The inspirational Helga Rohra of Germany

The Story of Tall Tim
Stigma. Speaking out against the S word