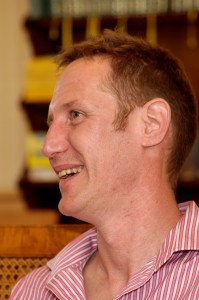 This is the story of how a (very tall) man found his vocation.  It started in 2000 when an indomitable woman moved into a care home that failed to see her for who she was.  Nine years later – via France and India – her son-in-law Tim Lloyd-Yeates set up a charity dedicated to improving the lives of older people in care.

This year alone Bristol-based Alive! delivered 2,500 specialist dementia activity sessions – such as Making Pals and Parlours of Wonder – in 300 care homes across nine counties in the South of England.

The website’s homepage features Paint Pals, an intergenerational project in which children make monthly visits to a care home to paint and share time with the older people.   In a video, a care home manager describes how the children’s visits make her residents “come alive”.

Take a look and see for yourself.   Young and old have a connection: the youngsters have patience and tolerance; the older people are simply themselves, a bit slower than they once were, not so talkative or confident.  Each brings out the best in the other; both have time, without judgement – valuable assets that most working age adults simply don’t possess.

While Paint Pals is certainly clever, and very effective, it’s not complicated or expensive.   It’s simple, and it’s largely about people making connections – which brings me back to the beginning of the story: to Tall Tim, his mother-in-law and her inadequate care home.

Shirley was 62 and had brain tumours, speech dysphasia and dementia.  Tim and his wife were expecting their first child and Tim was working in the City.    Two days after Shirley went to live in a care home recommended by her GP, Tim visited her.  He was struck by the fact that the home was operating at two speeds.

“The staff were running about with too much to do, while the residents were moving around in slow motion – and there was no connection between the two,” he explains.   The old people were sitting in a circle, staring into space, in a room heated to 90 degrees.  At 9.30am Shirley was watching TV from a wheelchair.  Tim had never seen her in a wheelchair before.

“Shirley was an indomitable woman,” he tells me.  “She didn’t own a big TV, she was a radio person who loved being outdoors.   So she was receiving the antithesis of everything she would have wanted – and what this told me was that the care home didn’t know who she was”.   A realisation that proved the catalyst for all that Tim’s gone on to achieve – at the heart of which lies (if you haven’t already guessed it) good old-fashioned person-centred care, with a bit of up-to-the-minute touchscreen technology thrown in for good measure.

For though Tim intervened to improve matters for his mother-in-law, her final months spent living in care weren’t good, and Tim knew it.  “I was 35 at the time and it left me with a burning sense that everyone, especially me, could have done better.  It fired me up and stayed with me”.

Over the next four years Tim gave up his City job and, using the small inheritance that Shirley had left them, the family travelled to India and France, where they lived for four years.  All the while Tim was reflecting on his mother-in-law’s bad experience and learning everything he could about health and social care policy in the UK, and about dementia.

Once back in England, Tim put his newfound knowledge into practice.  He became the general manager of a company facilitating music, poetry, quizzes and physical activities in various care settings – and he found his vocation.

“For the first time in my life I felt that I was in a place where I belonged.  I discovered I had a talent and a desire to connect with older people and those living with dementia”.

When the company franchised the model Tim decided to leave.  He was “as skint as a church mouse” and had a young family to provide for, but he had a vision.   He didn’t view the work he was doing as a business, but a social service.

He started phoning care homes in the south-west and as soon as one of them expressed interest, he armed himself with a wheelie bag full of song sheets, quizzes, poems and a CD player and set off on public transport to meet them.  Once inside, he engaged with the residents, many of whom had dementia, by kneeling down so that he was at their eye level and using non-verbal methods of communication to gain their confidence.   Every home he visited in those early days remains a client – and everyone in them calls him Tall Tim.

Three years into this form of private practice and with the help of two pivotal people, Philip May and Richard Pendlebury (both remain involved), Alive! became a registered charity.  It now has ten staff and 15 presenters skilled in the Arts and non-verbal communication techniques who, between them, facilitate thousands of activity sessions and have trained 500 individuals in 70 care settings to deliver the sort of respectful, stimulating and person-centred care so sadly lacking for Shirley.   Tim says training others to continue the work is vital; otherwise, the beneficial effects of the sessions are merely transitory.

In 2009 the story took another twist when Tim met a care home resident called Dorothy.  She was confused and, seeking to calm her, he asked what one thing she would really like to do.  When Dorothy said she wanted to see the Bay House hotel in Scarborough, Tim thought of the iPhone he’d just bought.  He took it from his pocket, typed in Google maps, found the hotel and showed it to her.  Dorothy instantly began telling him, lucidly and fluently, all about this significant place from her past.

It was, says 47-year-old Tim, a light-bulb moment.  “I had the first inkling of what the Internet and intuitive touchscreen technology could do for older people”.   A year later Tim and Andrew Morris launched Memory Apps for Dementia – a partnership that identifies and uses touchscreen technology to improve the lives of those with memory problems.

Now iPads form an essential part of Alive!’s work.  “It’s the people in the room who have the knowledge,” Tim says.  “They hold the answer.  It’s easy to get caught up in the activities – in Paint Pals or iPads for their own sake – but they are just tools, just a bridge to the person who has lost his or her energy or identity”.

The person – the individual – holds the key to everything that Tim, Alive! and Memory Apps set out to do.   As he says, “Everyone is unique.  Let’s stop pretending otherwise.  How can you serve people if you don’t know who they are?”

An excellent question from a remarkable man whose story, I’m sure, is very far from over.