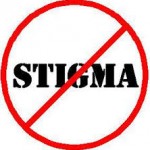 Since returning from the Alzheimer Europe conference in Glasgow I’ve been thinking a lot about stigma and why it clings to dementia. It simply didn’t exist at all for the three days I was there, replaced instead by a stimulating buzz of optimism and positive creativity.  So why does it persist in the wider world?  And just how big and bad are its effects?

A compendium of essays on the subject published last month brings together a range of insights and experiences from people with dementia, their families and carers, and from international professionals in the public, private and voluntary sectors.

Well worth a read, the report from the International Longevity Centre UK explores exactly what stigma is, why certain illnesses and conditions attract it and what we can do to eradicate it.

Within every contribution lurks the notion of fear – followed closely by silence due to the fear of speaking out.  Together, the two form a toxic combination, a vicious circle of entrapment: stigma breeds silence that in turn fuels fear that then feeds stigma.  And so we go on.

But how do we stop this negative, never-ending cycle?  For stop it we must.  As Julian C. Hughes, consultant in old age psychiatry, says in his essay, there is an ethical imperative to do so.  “Things must change”.   He argues that as interdependent citizens we have a responsibility to act.   But how do we accomplish this change?

In 2007, the LiveStrong Foundation in America produced a global report entitled “Cancer Stigma and Silence Around the World” – the title alone conveys its parallels with dementia, pairing as it does the two S-word partners in crime.

The study revealed, unsurprisingly, that the answers lay in raising awareness and education: in informing the uninformed.  Communication was, it concluded, vital.

Of course the major difference between cancer (likewise AIDS, the other stigma-ridden illness of the last few decades) and dementia is that certain cancers (and AIDS) are curable.  The 100 or so different forms of dementia remain incurable.

While acknowledging this, Dr Jack Watters of the pharmaceutical company Pfizer says that today’s attitudes to dementia still remind him of the early days of the AIDS crisis in the 1980s when the popular wisdom was that “it’s better not to know”.

“In those dark days we asked ourselves ‘Why would we want to hear this news especially when there’s nothing we can do?’ But there is always something we can do.

“With both conditions, one of the main reasons for not wanting to know the diagnosis is the fear of being marginalised, being ignored or misunderstood, and watching support disappear for no good reason.  In other words, stigma”.

Dr Watters believes that only by addressing such understandable if irrational behaviour head-on – by “bringing dementia out of the closet” – can we prevent it.

He describes attending a dementia session in 2012 where experts spoke knowledgably, but the most articulate contributor was a doctor with dementia.  She refused to see herself as a victim, instead viewing her early diagnosis as an opportunity to live each day to the fullest whilst taking charge of her own health.

The woman was Jennifer Bute.  I too have seen her speak and she is the very antithesis of a “dementia sufferer”, the term so disliked by many with the condition.

Someone once described Ken Howard, diagnosed with Alzheimer’s eight years ago, as “hope personified”.  I’d say that Helga Rohra, Agnes Houston, Chris Roberts, Nancy McAdam – all of whom I’ve met and all of whom have dementia – could equally well be described as such.

They, along with the 40 or so other people with dementia at the Glasgow conference, were what made it so positive and stimulating.  The “them and us”, the separation and marginalisation, the marking out as different – all defining factors of stigma – were missing.  In their place, inclusion in a community, a context, a conference, that understood them and wanted, above all, to hear what they had to say.

A month or so ago Radio 4’s Today programme ran a piece in which two partially sighted people gave their reaction to the White Cane Campaign, created to encourage the use of canes among partially sighted people who, it turns out, are reluctant to use them because of the stigma attached.  It had never occurred to me to associate stigma with white canes, but that’s because I don’t know anyone who uses one.

Rachael and Joe took contrasting approaches.  Rachael, having held out for as long as she could, has overcome her own psychological reservations and started to use a cane, which she says has  given her greater independence.  Joe is still holding out.

Listen to the piece and you’ll hear a discussion about what it is to have a condition of which other people are largely ignorant and don’t understand.  Both young people said they hadn’t minded “coming out” – their phrase – to their friends (when they were in what you might call a white-cane friendly environment, among those who understood them and their needs), but doing so publicly was difficult and, for Joe, a step too far.  So he’s struggling, in self-imposed silence about his condition, without one.

Again and again with dementia, cancer, AIDS and eye diseases – and doubtless countless other conditions – we hear that the stigma springs from ignorance.  Overcome ignorance with education and communication – cut into the silence and speak out – and we’ll overcome stigma.

To finish, I’m going to add a coda – a personal, possibly controversial plea.  The media has a powerful role in stigma-busting; it conveys to the public greater knowledge, personal stories and colourful individuals whose very presence spits in the face of misinformed prejudice.

I know that it sometimes makes mistakes. In the first piece I wrote about my mother, who lived with dementia for the last decade of her life, I’m ashamed to admit that I described her, in a national newspaper, as demented.  She was my mum; I didn’t do so to cause offence but out of ignorance.  I know better now.

The question of the media, its role, its power, its fallibility and its sometimes dubious agenda, I’ll tackle in another blog.  I just want to leave you with the thought that, for good or ill, we writers and broadcasters are the message-bearers – and we too are in a transition period as the subject of dementia looms larger in everyone’s lives.  We too are learning; we too are human.  Bear with us, or we’ll all lose out.

2 Responses to Stigma. Speaking out against the S word