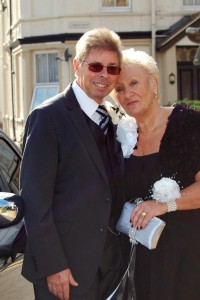 Ron & Jan Inman at their wedding blessing in 2012, where they renewed their 43-year-old marriage vows. Ron had been diagnosed with Parkinson’s dementia.

The story of Jan and her husband Ron runs to 48 years; it’s one of mixed fortunes and hard work, of ill health and injury, of four homes, two children, a marriage and a blessing.  But most of all, by far – by a long and winding Essex mile – it’s the story of an enduring love that weathered everything life threw at it, including, in its final years, dementia.

Talking to Jan, as I did in the difficult, limbo days before Ron’s funeral, is like talking to the 16-year-old she was when she first met him in the dance hall. She’s full of enthusiasm, brimming with details – prior to that double kiss they danced to the Walker Brothers’ “The Sun Ain’t Gonna Shine Anymore” (how poignant that title seems right now) – and so unutterably proud of Ron, who died on 30 December aged 66.

“It was true love, and I realise how very, very lucky we are – “ She pauses a moment before correcting the tense.  “I still can’t get used to the fact that he’s gone”.

Jan describes caring for Ron when he succumbed to Lewy Body dementia as a privilege and says that while nursing him in the last three months of his life she fell in love with him all over again.

Few of us possess Jan’s gift for caring.  Shortly before the two of them married in 1969 she took a job as an orderly at Dagenham hospital.  She lasted one day before deciding that she wanted to look after everybody and instead became an auxiliary nurse or care assistant.

“I absolutely loved it – it was the most rewarding thing I’ve ever done and it held me in good stead because all those years later I was so well placed to look after Ron.  I was always grateful for that”.

Yet even this big-hearted woman found dementia hard to cope with.  Her account of Ron’s illness is one of mistakes and well-meaning but misplaced advice that was only saved from the sort of ending neither of them wanted by the arrival of an Admiral Nurse, a specialist dementia nurse who, to quote Jan, “changed everything”.

Before Sam Taylor’s timely intervention, the common factor in this thread of the couple’s tale was a lack of detailed knowledge of Ron, of his primary carer Jan, and of their devotion to each other – a lack, in other words, of person-centred care.

The first inkling that things weren’t quite right appeared in 2010 when Ron, a usually confident man, became stressed driving.  Then came the nightmares and delusions, initially diagnosed by their GP as a nervous breakdown, but which Jan knew, “just wasn’t Ron”.  Months later, a neurological consultant confirmed that Ron, as Jan by then suspected, had a form of Parkinson’s disease.

At this stage dementia wasn’t mentioned, but after a year or so her husband’s worsening cognition began to worry Jan so in 2012 she took Ron to a memory clinic, where he was diagnosed with Parkinson’s dementia.  When, a few months later, he contracted a urinary tract infection, his GP prescribed antibiotics, which had what Jan describes as a devastating effect on Ron’s brain.

“He went mad.  He maintained a German accent for four hours, marching up and down the hall and he became incontinent.  It was awful.  Eventually I called an ambulance and he was taken to hospital”.  Following this traumatic episode Ron was finally diagnosed with Lewy Body dementia, a condition which Jan, alert to every little change in her husband’s condition, had already researched.

Jan was exhausted.  To make matters worse, a teenage injury to her spine had come back to haunt her and she was in almost constant pain.  Following two months of virtually no sleep she made a decision that she bitterly regrets.  She listened to those she assumed knew better than her and placed Ron in local residential respite care.

“I’m so cross with myself.  It was well-meaning advice but it nearly killed me. It certainly wasn’t respite.  I couldn’t sleep for worrying about him and in the end I brought him home”.

But being the prime carer for a person with dementia – however much you love him and want to be with him (or her) – is hard.  Without sufficient help, both emotional and practical, it’s impossible.  “My mood started to plummet,” says Jan.  “I’d lost my confidence and could see no light at the end of the tunnel – and I was angry, constantly asking myself, ‘Why him? Why us?’”

It was at this critical juncture, with Ron needing more help than his wife alone could provide, that Sam Taylor was introduced to them by the local dementia service.

With Sam’s help, Jan was able to formulate an action plan and work her way through the complexities of looking after her husband, including hiring agency carers, linking up with district nurses and, in the final months, turning to St Helena hospice in Colchester for the vital support that enabled Ron to die in his own home in Clacton with Jan’s arms around him and his family beside him.

In one sense, this is the end of a remarkable story – but then again, perhaps not.  For Jan is nothing if not a carer and sharer, and aware of how invaluable an Admiral Nurse proved for her and Ron, last year she set up an online petition calling on the Government to recruit and fund more of them.  The petition is still open.

Jan is also a Purple Angel ambassador, helping to raise awareness of, and reduce the stigma surrounding, dementia through various different community and fund-raising activities.

It’s a mark of the powerful, positive impact that Jan and her husband had on all those who met them that no fewer than nine of Ron’s carers (many of whom nicknamed the couple Mrs Mills and Boon) will be at his funeral.  Victoria Lyons of Dementia UK told me that she’d like to clone Jan, such was her undiminished spirit and dedication to supporting the charity even in her toughest moments – and there were more than a few.

I’ve commented before on how our attitude to those with dementia – how we view them, and the care and support we provide to them and their families – reflects on us as a society, shining a bright, unforgiving light on our humanity.

Talking to Jan in the rawness of her grief – her choice, not mine – I was struck by how dementia, ugly as it is, can take and take, yet also give.  It shows, if not the worst in us, the lack in us.  But it can also reveal the best in us; to me, Ron and Jan’s story does just that.

19 Responses to A Love Story