I first heard about care farms at an Alzheimer Europe conference, where I discovered that they are used extensively in the Netherlands as an alternative to day care centres for those with dementia.

It’s a wonderful, heart-warming concept that brings people with dementia close to the smells, sights and sounds of the outdoors, to the breathing warmth of animals and the touch of the land.  It gives them a purpose, a built-in fitness programme and life outside a nursing home.  The presentation I saw contained an image of an old lady pushing a milk pail along in her stroller that still makes me smile when I think of it.

Until the conference I didn’t know what care farms were, and I decided to find out if they existed here in the UK and if so whether they are used by those with dementia.   It turns out we have no less than 230 of them, under the umbrella organisation, Care Farming UK.

But their focus in this country is primarily towards vulnerable children and adults; where those with dementia are mentioned it seems – as so often with the very best dementia care – that provision for them is small-scale and patchy.

The size of the offering doesn’t diminish its quality however, and I hope that increasing awareness of living well with dementia will encourage the growth and spread of care farms for those with the condition.  In the Netherlands the farms have proved so popular that in 2013 they began to offer residential places (to date, about 20) for those with dementia.

To discover the benefits of care farming in the UK one need look no further than the website of a project called Let Nature Feed Your Senses.  It contains an inspirational account of four visits made by a small group of people with dementia from Credenhill Court care home in Herefordshire to the mixed grain and arable farm of Patrick Wrixon – a farmer who intuitively seems to understand the needs of those with the condition, even though his is not a care farm as such. 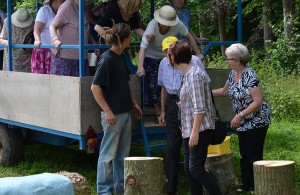 The illustrated record of summer and autumn trips to Devereux Wootton farm is guaranteed to lift your spirits on the gloomiest of January days.  It’s the little things that get you – the lively doggy welcome to put the elderly visitors at their ease, the tractor trailer with its jaunty blue awning used to chauffeur them about the farm, the profusion of seasonal, scented flowers, stems of wheat and inventive yellow-painted lining paper runners adorning each activity table.  I don’t know about you, but scrolling down the first few entries, I wanted to be there.

The project – funded by the Big Lottery in partnership with LEAF (Linking Environment and Farming) and the Sensory Trust – is a perfect example of how, when well executed, a simple idea spawns a host of unforeseen delights.

The trailer ride became much more than a means to tour the farm: it turned into a mobile workout, with (as the website records) “the stimulation of the ride, the simple act of holding oneself steady and hanging on tight, becoming an empowering and positive part of the experience”. 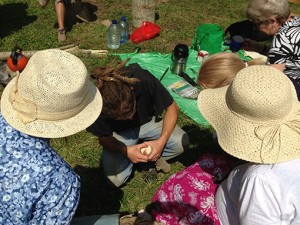 The elderly visitors were quick to spot the abundance of woodpiles, so Patrick asked a young man teaching forest-based activities to schoolchildren on the farm if he could adapt his classes for those with dementia.

Sam Goddard jumped at the chance.  Before long the Credenhill group were sitting in the shade of trees learning how to whittle hazel sticks and create whistles from elder twigs.  A normally near-silent old man began naming trees and plants; it turned out he’d once worked in forestry and the visit had unlocked in him a wealth of information that he was keen to share.

I could go on about the trips’ many and varied benefits for the group – and how their levels of confidence, ability and happiness rose with each successive visit and lingered after it – but you can read it all for yourself on the website.   The sting in the tail of this particular story is that the project was finite and came to an end just over a year ago.

Patrick, who explained to me that the higher level stewardship scheme in which his farm participates provides funds enabling him to host visits from different groups, said that he’d be happy to welcome people with dementia if care homes contacted him and helped with the planning.  The offer is there; let’s hope it’s taken up.

Another man who knows all about care farms and dementia is Lee Pearse.   This 41-year-old Sheffield filmmaker says that his mother’s diagnosis with fronto-temporal dementia seven years ago when she was just 59 almost tore his close-knit family apart and completely changed his life.

Talking to him it’s soon clear that he’s on a crusade to raise awareness of the condition, the effects of which he describes as “living in a daily horror movie”.  He’s the co-coordinator of the Sheffield dementia action alliance and has made two films (which you can watch here and here) charting the impact of his mum’s dementia on the family.

For the last ten years Lee has been involved with Heeley City Farm, created 33 years ago in the heart of Sheffield, and he’s recently become its dementia manager.  Like so many care farms, Heeley, which has 43 staff, is geared towards young people with learning and behavioural issues, but Lee, having seen how the environment and outdoor creative activities helped him and his brother to stimulate and maintain their mum’s wellbeing for several years after her diagnosis, wants to make it more accessible for people with dementia.

Last year, three groups of about 12 people with dementia and their carers visited from local care homes.  Their visits lasted about an hour and they toured the farm and held animals.  Now Lee wants to set up a dementia department focussed on the needs of those with the condition to maximise the farm’s benefits for them – and, importantly, their families – and use their experiences to aid research.  To this end he’s attempting to secure additional funding for the farm.

His plans could be helped by a report published last year outlining the current state of care farms in England and listing a number of recommendations aimed at improving their services, including developing an integrated strategy and ensuring that health and social care commissioners are aware of such farms and their offerings.   It reveals that the majority of care farms (76 per cent) are not running at full capacity, while 91 per cent could provide more sessions if they had additional staff, land, buildings and, most importantly, funds.

The report produced by Natural England (in collaboration with Care Farming UK and Essex and Leeds universities) reveals that relatively few care farms (less than a quarter of the total) have been visited by people with dementia.

This strikes me as a missed opportunity.  As Lee says of Heeley city farm, the infrastructure, animals, gardens and staff already exist to provide hands-on, therapeutic experiences for visitors.

Surely it’s time to ensure that those with dementia can benefit from the wealth of simple, sensory pleasures to be found in places such as Patrick Wrixon’s farm instead of, as happens time and again, being overlooked.

In a wonderful example of the power of social media, Sue Padfield of Fosse Farm in Somerset has just left a comment (see below) in which she eloquently describes hosting similar trips for care home residents, and how much she misses them.  It is an insightful, heart-warming addendum to my blog and, most importantly, Sue has given her email so that care homes can contact her about possible visits: suepadfield@aol.com

And now a Buckinghamshire farmer, Claire Morris (see comments below), has said that she would welcome further visits from care homes via her website: http://www.thecollegefarm.co.uk/groups/

Hospices & their ethos of care
A Love Story