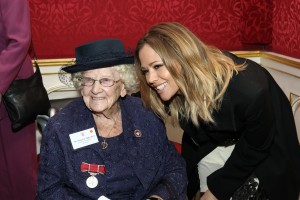 Margaret Miller sets quite a challenge to ageism.   Just take a look at her photo – she’s the one on the left with the stylish hat, the other woman is somebody called Kimberley Walsh.

You might think that, at 104 – yes that’s right, one hundred and four, I too struggled to believe it – Margaret would want to put her feet up.  More fool you.  She is currently Scotland’s longest serving (and oldest) member of the Royal Voluntary Service (or RVS).

On the phone from her home in Springboig, Glasgow, Margaret tells me that she first joined what was then known as the Women’s Voluntary Service (WVS) in 1939, the year the Second World war broke out.

She went on to set up a stroke club for the “Forgotten People” – those who had been treated in hospital only to be discharged and sent home without sufficient support.  And although she’s now handed over the reins of Lightburn Harmony Club (where songs, games and chat are shared) to her daughter Jean – “I’m too old to have my name on the papers” – she still helps out there every week.

Margaret stands on its wizened head the stereotypical portrait of a little old lady sitting in the corner.  She says she’s got “a very good word” to bring to order the dozen or so members of the Monday afternoon stroke club in Amulree Street when they’re not paying enough attention. It’s “Oi!” – and even from 350 miles away it’s delivered safely, loudly and firmly, into my ear.

This extraordinary centenarian may not be typical of the 15.2m people in the UK who volunteer at least once a month.  But the sheer longevity of her volunteering career is testament to the benefits it brings.  “I’d recommend it to anyone,” she says. “I get far more out of it than I ever put into it.”

As she reels off stories of the people she’s helped it’s clear that she thrives on it.   There’s the man she used to take Christmas shopping for his wife’s present; he never spoke a word but managed to stutter out that he wanted to go again, so much did he enjoy it. And he could sing beautifully.  When Margaret tells me that this is common among those who’ve had strokes I immediately think of those with dementia, for whom this is also true.

Then there’s the woman she found crying in a newly furbished restaurant because, unable to lift her feet off the floor, she thought she’d suffered a second stroke.  It turned out that the static from her stockings was sticking her to the freshly laid nylon carpet.  “She was like a new woman when we got her home,” Margaret says, and down the line I can hear her smiling.

One of several RVS volunteers who feature on its website, Margaret doesn’t take a starring role; she’s not even listed first, nor is it mentioned that last March she was one of a rare handful to be awarded her second British Empire Medal, known as The Bar.

Among other volunteers is Clive, who has limited mobility due to his diabetes and lives in rural Wales. Clive not only receives meals on wheels from the RVS, he volunteers for them, updating their Ceredigion and Powys Facebook and Twitter pages.

I love the idea of Clive being helped and helping too.  It mirrors the concept of reciprocity found in Japan’s model of dementia care, where carers and cared for are partners, each benefiting from the other.

And scrolling through the RVS website I was delighted to come face to face with teenage schoolgirl Holly, a telephone befriender to 70-something Carole who lives alone and whom she phones every week for a half hour chat.  A film of the two of them not only reveals that both gain from their relationship, it shatters the illusion that all volunteers are middle-aged women with time on their hands.

As I was writing this blog, with serendipitous timing, the Commission on the Voluntary Sector and Ageing announced the conclusions of 18 months of research, consultation and events.  Sadly its findings are less than positive. “The Voluntary Sector Is Not Ready For Our Ageing Society” it begins, before announcing that it’s been struck by the sector’s “collective failure of imagination.”

Its title is blunt: Decision Time. The choice for voluntary organisations: “To be in the vanguard of shaping our ageing society and embracing its opportunities, or remain in a slumber – missing the huge potential of an ageing population”. Margaret Miller is, of course, an extreme but very effective example of that potential and to my mind the commission missed a trick in not using her as its cover girl.

Justin Davis Smith, executive director of the National Council for Voluntary Organisations (NCVO) describes the report as “an exercise in controlled fury”. His blog on the NCVO website offers up a skilful dissection of it and is well worth a read.

He picks out as one of the commission’s key themes the need to blur boundaries – between the voluntary and business sectors, between different ages and, most interestingly, between the different roles of customer, volunteer and employee, so that “rather than seeing services to older people as being done to, the sector needs to re-design services to recognise the fact that older people will occupy multiple roles, encompassing service giver and service receiver, often at the same time”.    Cue Clive, the RVS volunteer from Wales, a walking embodiment of the culture of reciprocity.

And what of Margaret Miller?  I wonder what she’d make of lengthy reports and online blogs into the role of volunteers in shaping our ageing population.

She told me that all she sought to do when helping her stroke people (as she calls them) was to give them back their confidence.  And how did you do that? I asked with all the innocence of my 55 years.  “By treating them normally,” came her instant and brilliant reply.

Sometimes life (particularly 104 years of it) teaches us things that no amount of clever research and erudite papers can ever do.  So why on earth don’t we listen more, make greater use of and appreciate all that older people have to offer – as volunteers yes, but also as valued and respected members of society?

NHS Change Day, in the shoes of …
This Is Your Life