Dementia Friendly.  A phrase so frequently bandied about it’s in danger of losing its value.  Over one million of us in the UK (including me) have attended a session on how to be a dementia friend and earned the right to wear a badge declaring that we are one.

Fair enough – it all goes towards raising awareness of a condition that now affects 850,000 of us in this country (not to mention the thousands more family carers involved), but I want to look behind the words to see how dementia friendly translates into everyday life.  Having come across a set of people in Yorkshire who, to me, embody what it means, I’d like to share their stories.

Fiona Andrews is community liaison officer with the British Transport Police in York. Three years ago, tasked with finding out what she could do to improve dementia awareness at the railway station, she decided to become part of the Joseph Rowntree Foundation’s “Dementia Without Walls” project, designed to create a dementia-friendly York.

For the first few meetings Fiona sat in her uniform wondering why on earth she was there.  “It seemed to be health and care-related, nothing to do with the police.  I didn’t see how I could fit in”.

Then she had what she describes as a light bulb moment.  “A couple living with dementia came and spoke about what life was like for them – they were no longer going to the shops because the husband kept wandering off or being aggressive, as a result his wife had lost confidence and become socially isolated.  Suddenly, I got it.

“I saw that they weren’t asking us what we could do for them but how we could work together.  I saw that it wasn’t about how to solve you – the people with dementia – as a problem, but about us having to change ourselves”.

Fiona’s words are bang on the money.  Those with dementia aren’t the problem, we are: we’re simply not dementia friendly enough, though things are improving, starting with people like Fiona, who told me that she “wants to use her uniform to promote positive change for those with dementia”.

She’s already succeeded: in conjunction with the local Alzheimer’s Society, she’s made it easier for people with dementia and their carers to take the train.

She invited a group of those with the condition and their carers to walk round the station to see what signs, lighting, floor markings, glass roofs or toilets needed adapting and persuaded Virgin East Coast train company to make the changes.  She arranged supported day trips paid for by the company (for whom she’s now a Dementia Champion).  She formed a partnership with Yorkshire and Humber Dementia Action Alliance and joined the North East DAA, who are now conducting similar supported train journeys.

Tony Neal took his late wife Jenny out for the first time in her wheelchair on one of these trips and said that without them he could never have undertaken a train journey with her.  “For us it was a very easy win,” says Fiona. “But it was life-changing for Tony”.

This is what being dementia friendly is about.  It’s not rocket science, or expensive or gimmicky; it’s about thoughtful (often small, inexpensive) interventions.

Unlike Pc Andrews, 67-year-old Peter Smith from Rothwell doesn’t have a uniform, but following his mum’s death in 2004 (she had vascular dementia), he’s worked to make his area dementia friendly in what he calls his Frank Sinatra – “I do it my way” – way. 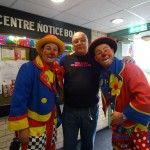 Discovering that there were no local memory cafes Peter decided to set one up in a church hall.  The result, on the first Saturday morning of each month (a slot he was warned would never work) is the Tea Cosy café which draws 140 people monthly and requires an “army of volunteers”.   For £3 those with dementia and their carers, as well as a few people with learning difficulties and mental health issues (no one’s excluded) enjoy a cooked breakfast, quizzes, entertainment and chat.

This jaunty, upbeat film set (in a stroke of genius) to Dean Martin singing “How do you like your eggs in the morning?” shows the fun and warmth that – when fuelled by the passion of an individual such as Peter – something as cheap and cheerful as breakfast and a bit of human contact can provide.

When Leeds City Council set about becoming dementia friendly two years ago, Peter helped by bringing together people with relevant experience.  The best response came from West Yorkshire police, for whom Peter and the local Alzheimer Society ran several sessions.

The number of police officers attending grew from 30 to 80, then to other parts of the force, then to transport systems and other organisations such as the community pharmacy association’s 200 pharmacists.  Today, West Yorkshire police are believed to be the only UK force with dementia friendly stickers on their vehicles.

What Peter describes is an evolutionary process.  Being dementia friendly isn’t a top-down or one-size-fits-all sort of thing – and I’ve come to the conclusion that, because of its person-centred nature, it inevitably involves small groups.  It only grows through these groups sharing ideas and best practice, and networking, just as Pc Andrews and Peter did.

Peter has also been instrumental in setting up several dementia-friendly pub sessions around Rothwell which you can read about here.  And although he didn’t tell me about it, he played a part in another inspired initiative.   This Christmas the West Yorkshire Playhouse staged a dementia-friendly performance of White Christmas, for which they called on Peter and the Tea Cosy café for help.

As a result, the voices of those with dementia were heard: they were invited to rehearsals and gave their feedback to the director.  Singing sessions were 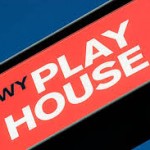 held with the audience before they’d even set foot in the theatre so that they could familiarise themselves with the tunes; strobe lights were cut; sudden, loud sound cues were made less startling, the auditorium lights were less subdued; a quiet room was provided (but, brilliantly, never used because everyone was having such fun).

As Louisa Clayton, a young Playhouse attendant, said “Something like dementia shouldn’t stop you being able to enjoy a show”.   She is so right.  A little consideration, a few nips and tucks – and bingo: we’re all included.  It’s called being dementia friendly.

When Chris McDermott lost his wife Doreen (who had dementia towards the end of her life) he fell into “a bad place”.  Then, in 2012, with the help of some counselling, the 82-year-old pulled himself round and, determined to help others who were experiencing what he’d been through, he became involved with his local dementia friendly group in Idle, near Bradford.

About 25 people with dementia and their carers attend the fortnightly meetings, where Chris chats to the carers, offering the advice and comfort of an “expert by experience” and joining them on their strolls through Buck Wood.  The once deeply depressed octogenarian says the gatherings have given him a purpose.

Recently a carer told him that the group was the best he’d ever been to – as Chris tells me this I can hear the pride in his voice.  He’s right to feel proud: he’s making a difference to somebody’s life.  How many of us can say that?

The more I see of projects that have at their heart the quality of life of people with dementia and their carers, the more I realise that they are (almost by definition when you think about it) small-scale, grass roots initiatives geared to individuals.  Being dementia friendly can never be an add-on; it’s part of everyday life, a mind-set that views supporting those with the condition as something as instinctive as breathing.

Badges and more generalised, broad-brush sessions such as the one I attended undoubtedly have their place.  But being dementia friendly is a way of thinking, of seeing other people and wanting to help rather then turning away.   On a personal level (which, let’s face it, is where we all operate), it’s about small acts of thoughtful kindness based on a growing knowledge of what dementia is.

10 Responses to Dementia Friendly. What does it really mean?