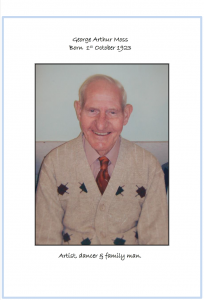 Though I never met him I feel that I knew George Arthur Moss who was, to use his own words, “a fairly quiet man with a good sense of humour”.  Others describe him as caring and gentle.

George died in 2008 aged 86, having been diagnosed with dementia four years earlier.  Now that I’ve come to know this Oldham man a little I’d say that he was warm and creative, fond of the outdoors, walking and gardening.  A technical illustrator, he was also a talented artist and he loved to dance.  The most important people in his life, so his words tell me, were his family.

I wish I’d met George in person.  As it is, I know him through his Life Story Book, and while he was alive, this was how his carers came to know him.  Take a look and you’ll see how the collection of George’s words, pictures and photos of significant moments in his life reveal the man he was.

For the year he lived in a care home his Life Story Book (created months earlier) proved invaluable, both for those looking after him and for George himself, as his daughter Jean Tottie, now Chair of the Life Story Network, a community interest company dedicated to promoting excellent, individualised care through life story work, explains.

“We looked for a care home for dad close to where we lived in Yorkshire.  I gave dad’s Life Story Book to the manager before he moved in and the day dad arrived the manager didn’t talk to us, but to him, which was just as it should be; it turned out the two of them shared a love of rugby.

“My dad was so proud of his book.  He showed it to other residents and every member of staff read it with him and found something of common interest to talk to him about – dad’s care plan centred around the book”.

Jean, a retired occupational therapist whose career spans 35 years in health and social care, readily admits that even with her professional knowledge she found it hard to navigate her way through the system when her father developed dementia.  It was Polly Kaiser (a clinical psychologist, doctoral supervisor and member of the Oldham Life Story Group) who suggested to Jean that one of her students could create George’s life story while he was still living at home.

Jean jumped at the chance because, though unsure precisely what life story work entailed, she recognised its potential value.  So it was that Chris, one of Polly’s post-graduate students, made weekly visits to George for three months, talking to him and gleaning information to include in the all-important book.

The Life Story Network, which collaborates with a diverse range of organisations to enhance the quality of care of individuals such as George, was born in Oldham (to which all roads seem to lead in this particular story).  It was the late 1990s and a man called Ken Holt was caring for his wife Alice, who had dementia.  When Alice moved into a residential home Ken thought he’d write a little story about her so that her carers would know exactly who she was.

He wrote that if Alice resisted putting on her nightie at night this might be because she thought she was going into an air raid shelter.  “You need to know these things about my wife”, Ken told the home.  How right he was.

Ken understood the benefits of life story work because he’d seen how it helped children in care.  And he and Polly Kaiser set up a local steering group to spread the practice – which was where Jean first encountered Polly.

Having experienced life as a carer from both sides of the fence – as a professional helping others and as a family carer herself – Jean has always been keen to “give something back”.   She was lucky to receive the support of an Admiral Nurse (a specialist nurse focussing on the family carers of those with dementia) and after her father died she became Chair of Uniting Carers, a network of family carers that until recently existed under the umbrella of Dementia UK, the charity that provides Admiral Nurses.

With the same altruistic motive, and though her emotions must still have been raw, six weeks after George died Jean agreed to give a talk on the value of life stories at a symposium in York.  Ken Holt was due to speak but because he was unwell Polly conducted a video interview with him in which she asked about the future; Ken replied that they should set up a national network.  The Life Story Network, set up as a community interest company in 2012, is Ken’s legacy.  He died two years ago.

One of those in the audience at the symposium was Ruth Eley, then head of the national programme for older people and dementia at the Department of Health.  She immediately saw the relevance of life story work to the Government’s dementia policy and helped Jean to corral other like-minded professionals such as Anna Gaughan, who was then leading the Department of Health’s Dignity in Care campaign in the north-west.

Yet another steering group was formed and in February 2010 the idea for a national life story network was launched at a conference in Leeds.  On the back of this successful event the group set up their website and (having secured a £200,000 grant to train staff and carers in life story work as part of the Government’s Dementia Strategy) formed the community interest company that exists today – with Anna as chief executive, Polly as a director and Ruth as Jean’s vice-chair.

So, fittingly, the Life Story Network’s own history is all about networks and the coming together of like-minded people.  And its story isn’t over yet (I doubt – and hope – that it ever will be).  It has just announced that to take the place of Uniting Carers (and building on the work of the Carers Call To Action which ended in March) it is setting up a new network for family carers of people with dementia, for which it has secured start-up funding from the Department of Health.

Discovering George Arthur Moss through his Life Story Book reminded me that we are all so much more than the aspect we present to a stranger for the very first time.  When we’re independent and can communicate clearly, this doesn’t much matter, but if and when our health fails or for some reason we become dependent on others, it is vital for them to know who we are.  Of course it is.  Put like that, it sounds so obvious, so simple, so human.

Jean told me that, having seen how Chris engaged with her father to entice his story from him, she now feels quite envious of carers embarking on life story work.  I understand what she means.  But at least George’s carers knew who he was.  Now, thanks to his daughter Jean and the Life Story Network, many more people will be known, treated and respected for the unique individuals they are. 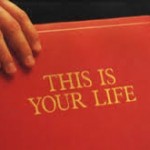 12 Responses to This Is Your Life