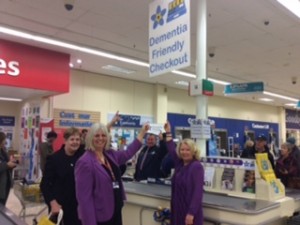 This blog is dedicated to Tommy and Tony.  Two men who each, in their very different ways, are helping to improve the lives of people with dementia.

First up is Liverpudlian Tommy Dunne, who this week – Dementia Awareness Week (#DAW2015) – opened what is believed to be the first dementia friendly check-out in a Tesco superstore in Chester.

A story told to me by Tommy, diagnosed with Alzheimer’s disease four years ago when he was 58, shows just how valuable such a check-out will be – bear in mind that, because of his dementia, loose change “makes no sense” to Tommy.

When he and his wife drove to a supermarket to pick up a couple of things Tommy (unusually) ran in to buy them while Joyce waited in the car.  The shopping came to £1.43 so Tommy showed the cashier his dementia card, which explains that he might need some help, and held out a handful of coins for her to take what she needed.

The girl looked at Tommy’s card and promptly shouted to a colleague, “Hey Olivia, this man’s got dementia – he needs help”.  I hardly need Tommy to tell me, as he does, that this was a “I wish the floor would open up and swallow me moment”.

Typically, Tommy doesn’t blame the cashier but the store, for not giving her dementia training.  To me, her reaction sounds as much to do with a lack of common sense or kindness than training, but this is Tommy’s story not mine. 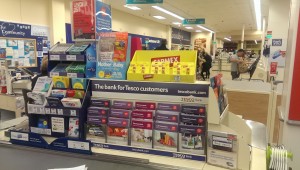 One thing that Tommy and I do agree on is the benefits the Tesco check-out will bring.  “The confidence that knowing these types of checkouts are available will give family carers and people with dementia a confidence and self-belief that they can use these shops and not feel as if they are outcasts from society,” he says.

Tesco’s dedicated check-out can be traced back to Andy Tysoe, a memory nurse at the Countess of Chester hospital who also works with the council to make the borough more dementia friendly.

Andy, a Dementia Champion, has created over 4,000 dementia friends and delivered over 100 of his tailor-made #dementiaDO training sessions which incorporate both NHS and Alzheimer’s Society features.  When he suggested that they introduce a dementia-friendly check-out, the management agreed. 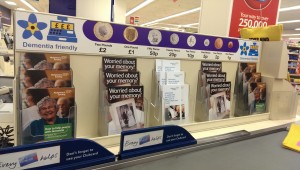 The check-out after its Dementia Friendly makeover, complete with coin reminders

And this week, Tommy, along with others who are living with dementia, officially launched it after Andy had delivered a #dementiaDO training session for 40 staff and members of the public in Costa Coffee.  “It was the first time I’ve been in competition with a Cappuccino machine,” jokes Andy.

Tommy says the dementia-friendly check-out means he now feels “safe and comfortable enough” to go shopping on his own.

The till, which has pride of place, with a large Dementia Friendly sign suspended above it and visual aids to help those with dementia identify the correct coins, will always be operated by someone who has attended one of Andy’s #dementiaDO sessions and become a Dementia Friend.

Andrew Schofield, the store manager told me, “We thought the launch was so successful we are now planning for Andy to train about 30 superstore managers in the north-west and it would be lovely if we could introduce Dementia Friendly tills in every store in the region”.

I think we can safely ring that one up as a result.

Tony O’Flaherty is an old friend of mine.  I’ve always known he was mad, bad and (quite literally) dangerous to know.  But recently he did something which, though mad and dangerous was anything but bad. 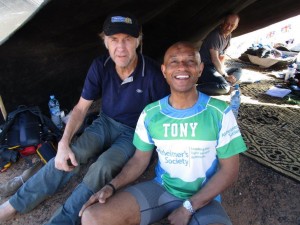 Sir Ranulph Fiennes, the oldest Briton to complete the Marathon des Sables, with Tony O’Flaherty who ran for the Alzheimer’s Society

Last month this Dulwich father of three competed in the Marathon des Sables, rightly billed as the “toughest footrace on earth”.  Held annually in the Sahara in southern Morocco this international event requires its competitors (this year there were a record-breaking 1,360) to complete the equivalent of six marathons in six days in temperatures of up to 53 degrees centigrade.

When he’s not running, cycling, scuba diving, sky-diving (he’s done 227 jumps in total), climbing (he’s scaled countless mountains from the Eiger and the Matterhorn to Kilimanjaro), Tony is owner and director of the Wandsworth, Lambeth and Dulwich offices of home care provider, Home Instead.

His company specialises in dementia care and, since training as a Dementia Champion last year, Tony has given talks to 1,250 people, from GPs and nurses to children.  If he talks as fast as he lives, they must have been pretty interesting.

But the reason why Tony co-stars with Tommy in this week’s blog is that his fearless – some (his wife Jane included) might say feckless – exploits in the Sahara have so far raised a whopping £7,500 for the Alzheimer’s Society.

Tony’s achievement is all the more remarkable because 23 years ago, after falling 60ft while climbing in Alicante, he was told that he would never walk normally again. He had broken his back, thigh, wrist, arm and foot, fractured his skull, punctured a lung and paralysed his right leg.  “It was the surgeon’s comment about not walking again that prompted me to prove him wrong,” says Tony. 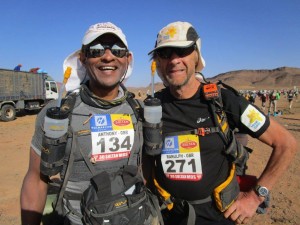 Tony and Sir Ranulph Fiennes during the Marathon des Sables

I think it’s safe to say he has.   The 53-year-old tells me that both his trainers lost their heel section within the first 24 hours and on the third (and worst) day his gaiters ripped, enabling sand to pour into his shoes.

“Distances are deceptive in the desert – you feel you’ve done three miles only to find you’ve covered one, which is soul destroying,” he says.  “Climbing the sand dunes is absolutely brutal – it’s one step forward, two steps back, and takes massive amounts of energy to conquer them”.

Despite – or perhaps because of – the physical and mental demands he underwent Tony describes his ordeal as a fantastic, unmatchable experience.  But the biggest reward was something for which he wasn’t prepared.

“The biggest takeaway was the unexpected love, warmth and bond that I developed with my tent mates.  Although I’ve done many extreme things under exceptional circumstances, I’d never again be able to replicate this incredible feeling of camaraderie”.

It struck me talking to the two Ts – Tommy and Tony – (and Tysoe makes three) that we really are all in this together.  There could hardly be two more different (ad)ventures than supermarket shopping and the Marathon des Sables.  But they share a common purpose which, in Dementia Awareness Week, couldn’t be more fitting or timely. 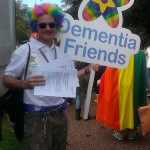 Dementia Friendly. What does it really mean?
Asset Value