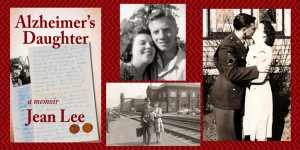 Jean Lee’s memoir “Alzheimer’s Daughter” is at once a moving, highly personal and informative account of how the “brain-devouring monster” simultaneously swallowed up both her parents’ lives, and a universal story.  It offers solace, through experiences shared, to millions of people currently confronting the same impossible decisions and living through the same heart-breaking moments that this retired American teacher from small-town Ohio has known and of which she writes so well.

For this alone it is worth reading. (It is one of the best individual accounts of living with dementia that I have come across).   But it is far more.   Punctuating the sad, steady (and by now to many of us all-too-familiar) tale of decline due to Alzheimer’s with poignant wartime love letters between her mother and father, lends Lee’s memoir an added depth. She reminds us of the broader picture, of the generation-upon-generation that constitutes a family, of the never-ending cycle of life. And it is this that, for me, marks out her book.

It is based on a journal that Jean began at her older sister’s instigation as the two of them became increasingly concerned about their parents’ deteriorating mental states. With the first, early mention of the journal comes the first mention of an emotion that, above all others, seems to dominate the lives of those whose loved ones have dementia. Guilt.

Even though she’s recording events with her parents’ wellbeing uppermost in mind, Jean regards it as a betrayal, feeling as though she’s “gossiping about them on paper”. She agrees to her sister’s suggestion in order that Annette, who lives a thousand miles away, can be informed of events and the pair can work “as a team”.

The passage is an early indication of the thoughtful, thorough nature of its author and the importance to her of her sister’s support – she describes her as her “constant protector”.

Deciding to move one’s parents out of a much-loved, long-standing family home into sheltered housing or a care home is one of the hardest decisions any of us will ever take. I have written about it at length here – and the practicalities of the move itself are often equally traumatic. To do so alone (as I am determined that my only daughter will never be left in a position to do) must be much worse. Ming Ho, an only child, writes about it brilliantly in her blog dementiajustaintsexy.blogspot.co.uk.

Reading her memoir one has a sense of Jean Lee’s wider life as the working mum of grown-up children and of her position in the broader family. In the midst of the heartache and remorse “of taking everything away from parents who had given us everything” there are moments of pure happiness, such as at her daughter Susie’s wedding. Jean describes how her parents Ibby and Ed seemed normal as they “laughed and giggled like lovebirds themselves” – and with their earlier love letters offering tantalising glimpses of the dewy-eyed young lovers they once were we are reminded of their own rounded selves, the people they were and still are, Alzheimer’s and all.

It’s a point well made when Ed, who survives Ibby by several months and whose dementia has “thickened to the point of being a solid wall with only little pinpricks of clarity coming through” nears the end of his life. His daughter knows that despite this she has much to learn from him. She puts it like this: “The most beautiful part of Dad was what still remained” – a man who found “giddy happiness in McDonald’s ice cream and sweet smelling hand lotion.

“How often did I completely ignore mundane things such as these in my life? I thought of how many times I might have been in the middle of a wonderful moment but I’d not recognised it because I didn’t fully engage”. It’s worth taking a minute to ponder Jean’s words (and if you’ve time, to read a blog I wrote about the power of these “Perfect Moments”).

And yet, for the most part, “Alzheimer’s Daughter” is a detailed account of the daily minutiae of caring for her parents, whose frustrating behaviour stretches Jean’s patience to its limits.

When her parents angrily refuse to accept their diagnosis Jean gives vent to her frustration and, shaking with emotion, yells at them – and immediately feels guilty. On the drive home neither of them will speak to her. “The scales had tipped – I’d become the enemy”.   Anyone with a loved one with dementia will relate to that.

But then read a passage towards the end of the book when Ibby, now living with Ed in a locked specialist Alzheimer’s unit, develops a habit of scraping her fingernails across the table and caking them with dirt.

For two lengthy paragraphs Jean meticulously describes how she washes Ibby’s nails using sanitising wipes, clippers, polish remover, manicure sticks and sweet smelling lotion. It’s a labour of love during which two thoughts run through Jean’s mind: “First, I thought I might be paying her back in some small way for all the times she’d cared for me using those hands. Second, I thought, I hope my daughter never has to do this for me”.

“Alzheimer’s Daughter” never shies away from the truth. Towards the very end Jean Lee’s pastor asks her if she’s given herself permission to fall apart after Ed dies. Her reply: “Absolutely not. I don’t believe I’ll fall apart, because Mom and Dad will suffer no more. I’ve fallen apart for the last ten years. Now I’ll put myself back together”.

How that resonated with me. As did virtually every line of the book – except to say its author may have been a better Alzheimer’s daughter than I was. But perhaps we all think that. And perhaps, ultimately, the overriding power of this memoir may be to show us that however flawed we are, however impossible coping with dementia often seems, we aren’t alone. It’s a beautiful book in which its author not only bares her considerable writing skills but her soul. Do read it.

“Alzheimer’s Daughter” is published by Gratitude Press and is available at Amazon for £8.54

Tim Lloyd-Yeates
What’s in a name?