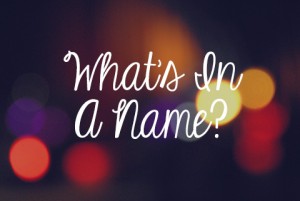 When my mum moved into her nursing home the staff called her Kathleen because that was, actually, her name. But the truth is she was never called Kathleen, or Kathy, or Kate. My mum was always Kay.

As is often the case, mum’s entry into the home was the culmination of a traumatic few weeks and, for whatever reason – not wanting to seem petty or perhaps simply because I was physically and emotionally exhausted – I didn’t correct the manager when she called mum by the wrong name. And so, because of my lack of correction, Kay Kelly – already made vulnerable and confused by her dementia – became Kathleen.

A small thing at the time after all we’d been through as a family, but one that loomed larger as mum’s identity – the colourful, slightly eccentric, big-hearted, sharp-tongued persona of my irreplaceable mum – was subsumed by her dementia. The fact that staff at her nursing home called her Kathleen not Kay contributed to the sense of mum’s changing self. I didn’t see this at the time; I do now.

And so my eye was caught by this week’s headlines that the Care Quality Commission (CQC) had banned staff at Brackenley Care Home from calling their residents affectionate names such as “love” and “sweetie”. I’ve been around long enough to know that behind the headline lay a far more complex story – and it’s one that Andrea Sutcliffe, the CQC’s chief inspector of adult social care outlined in her latest blog, which is worth reading here.

Indeed, if you read the articles beneath the newspaper headlines, they make the same point as Andrea: that the CQC’s comment about the staff’s use of language was part of a broader criticism about the lack of respect observed at the home, including inadequate screening in a shower room.

What is certainly true – and what Andrea puts her finger on – is that the issue at stake here is that “people are called what they want to be called. Some will really appreciate affectionate terms of endearment, others will not”.   What we are talking about – as Andrea’s blog makes clear – is person-centred care, focussing on the individual (and his or her family).

The Daily Mail illustrated this with a full-page piece in which two writers gave their opposing personal views. Mandy Appleyard described her late father as shy and reserved. When he lay dying a teenage carer breezed into his home and addressed him as “my darling” and “my love”. Mandy’s mum, a retired secretary of the “old school”, politely told the carer to call her husband by his name, John, which she did.

Rebecca Ley on the other hand says that she “actively enjoyed affectionate names being bandied about” by well-meaning staff in her father’s care home. “They were scraps of comfort – for him and us – at a time when everything seemed to be falling apart”.

We could talk all day about the significance of language used in care settings, but what this particular “storm in a media tea cup” (to use Andrea’s phrase) reveals is the vital importance of person-centred care: of knowing the individual and providing him or her with appropriately tailored support. This, in turn, helps to protect and respect the person’s dignity.

For Mandy Appleyard’s mother, “carers assuming an inappropriate familiarity with the man she had loved for more than 60 years was one of the many small indignities she felt they faced in the dark days before my father’s death”. For Rebecca Ley, “a friendly ‘darling’ delivered with a smile was something to be clutched at”.

Both these writers’ fathers had dementia, a condition that often makes it difficult or impossible for those who have it to voice their own views, making them very vulnerable and their loved ones understandably protective of them.

My father didn’t have dementia but he was very ill towards the end of his life and unable to move, eat or speak coherently. He lived in his apartment looked after by a wonderful Zimbabwean carer called Martha. Until this week I hadn’t thought much about what Martha called my dad. In fact she called him “Daddy”.

Martha cared for my dad with unwavering devotion for three years and I wouldn’t have dreamt of asking her to call him Arthur or Mr Kelly. Perhaps this was because I could see that dad didn’t mind; he was an easy-going chap. Perhaps it was because, as I’ve written before, in dad’s difficult last months Martha, through the care she gave him, in many ways grew closer to him than his own family.

I don’t think mum minded people calling her Kathleen; I believe it’s what her mum called her as a girl. But – ironically, given that dad’s carer called him daddy – I know mum missed being called mum because she told me this during one of my early visits to her nursing home. It was one of those impossible, heart-stopping moments of which there are far too many when someone you love has to move into care.

It may be a shame that headlines sensationalise serious issues. At least they bring them to the fore. What is good about this particular story (stormy or not) is that it highlights the need for a person-centred approach to caring for the most vulnerable in our society.

6 Responses to What’s in a name?