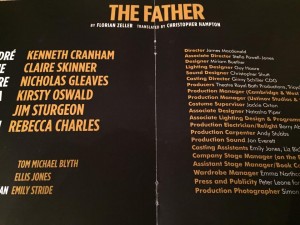 Watching Florian Zeller’s brutally honest play “The Father” left me unsettled. It left me unsure as to who each of its six characters actually were, of where they were, and when they were there. It left me confused and emotionally drained. But boy, did it move me.

This award-winning work, translated from the French by Christopher Hampton and now playing to packed audiences in the West End, is an exploration of what it is to have dementia, from the inside out. It is sad with flashes of wit; it is challenging and quite often difficult to watch.

Yet – somewhat to my surprise – as the performance finished many of those around me rose to their feet in a standing ovation. I was still reeling from what I’d just experienced: for when watching “The Father”, we the audience don’t merely observe a man’s dementia progressing, to a very large extent, we enter his world.

We watch, perplexed, as André’s daughter Anne changes appearance (her part is at times played by a different actor); we try to work out if she is married or not (and if so, to whom); we wince at the jarring, disruptive sounds accompanying ever-longer periods of silent darkness between each short scene and, finally, as the once flamboyant André sits in his nursing home bed, clinging to his nurse and sobbing like a baby, we cry with him – at least, I did.

Such are the skills of the cast and James Macdonald’s direction that, despite the bleakness of its subject matter, the play has a driving, compelling intensity and a thin thread of black humour. It runs for 90 minutes without an interval and I can see why.

Kenneth Cranham as André is big in both stature and character, a once dashing man with an eye for the girls who wants to bat away his confusion like so many irritating flies. Only his ever-present, anxious frown gives him away. But even he can’t beat dementia. When he walks in unseen and overhears Anne and her husband – or is it her boyfriend (we’re all unsure)? – talking of a nursing home, he shrinks back into the wall, a shadow of his former self.  An image that is at once poignant and terrifying; none of us wants to walk in his slippered footsteps.

Claire Skinner (better known to me as the mum from TV’s “Outnumbered”) gives a sensitive, understated portrayal of Anne, a woman exhausted, riddled with guilt and pulled in different directions. One of her very first lines is, “We can’t go on like this”. Of course André isn’t listening, or if he is he doesn’t know what she means. She might as well be talking to a brick wall. Except this is her dad.

In a rare moment of stillness, Anne delivers a terrible soliloquy on a nightmare she’s had. As she watches André sleeping she feels “a wave of hatred” and imagines tightening her hands around his neck. What she says is hard to hear: too close to the awful truth of what dementia makes people do and say (and I’m not referring to those who have it).

One step removed, Anne’s husband Pierre stands apart, often watching. André’s not sure of him – and neither are we. Is he as sly as he seems or is it André’s (and our) paranoia?

“How much longer do you intend hanging around getting on everyone’s tits?” Pierre’s words to André are unspeakably shocking. And yet they are spoken. In front of an audience whose sharp, collective intake of breath could be easily heard.

Zeller’s cleverly structured and insightful play begins to show us some of what it is to have dementia; it casts an unrelenting spotlight on what it does to those who have it and their loved ones, which is unnerving. Deft performances, clean, spare writing from a master of translation and assured direction help to pull this off and keep the audience in its grip.

What I find more extraordinary is that, at 35, this comparatively young playwright has found the dank, mossy stones that lie deep within our souls and, unafraid of turning them over, revealed what they hide for all to see. Do go, but with tissues, a stout heart and a good friend.

“The Father” plays at the Wyndham’s Theatre until 21 November

What’s in a name?
What Flowers Remember & Children Teach Us