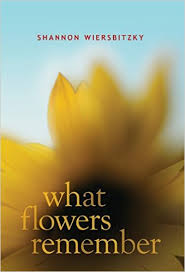 There is a poignant moment in “What Flowers Remember” when old Mr Clancy asks his 13-year-old friend, “Who will I be if I don’t remember my life?”   Needless to say Delia, a young narrator with a wit and wisdom beyond her years, has no answer.

Who does?  I certainly didn’t when my 82-year-old mother said the very same thing to me shortly after she moved into her nursing home.  It is just one of the many themes in Shannon Wiersbitzky’s short American novel that resonates with me.  Her book is aimed at readers aged nine to 14 but I loved it (and I’m four decades over 14).

This was partly because it is sensitively written by someone who quite obviously enjoys words as much as I do.  Shannon’s writing is lyrical and her deft weaving of flowers, seeds, renewal and growth into a story that is as much a touching coming-of-age story as an exploration of one of the most misunderstood conditions of our time, is very skilled indeed.

However the main reason that her novel works so well for me is because it comes at dementia from a child’s perspective and shows, above all, the power of making connections – whether through passing heirloom flower seeds through the generations, curating diverse memories or finding your first love.

Children, in their naivety, see things afresh.  Delia, seeing the changes in “Old Red” Clancy, her adopted grandpa, is as bewildered as he is – she has no knowledge of Alzheimer’s.  When the condition is explained to her, she finds the notion of Old Red forgetting his late wife Rosalea impossible to comprehend.

“No one could forget something that important to them.  They just couldn’t”.   It’s what we adults so often think when confronted with the truth of dementia; but instead of voicing our disbelief as young Delia does, we turn to anger or simply turn away – and stigma and fear begin to breed.

Delia, with a child’s enthusiasm, comes up with a plan: to collect Old Red’s memories and write them down for him.  In doing so she discovers wonderful, previously unknown facts about him – she also discovers that the elderly residents of Tucker’s Ferry seem to have all the time in the world and like nothing more than to chat.  She collects their stories and photographs of Old Red and, when he has to move into a nursing home, she takes them to him and creates what she calls his “remembering wall”.   She is of course enacting the very best in person-centred care and, in the process, showing younger readers what they might do were they to find themselves in her position.

In its clever depiction of dementia, this novel draws out the affinity that exists between young and old.  It reminded me of the tremendous work being done through the intergenerational Paint Pals project of Alive!, a Bristol-based charity set up by Tim Lloyd-Yeates, who very sadly died this year.

Four years ago Paint Pals paired seven older people with seven primary schoolchildren so that they could send each other postcards with paintings and short notes on their interests and experiences.  Today, Paint Pals sessions run across three counties, in nine care homes and local schools;  and as well as the exchange of postcards, three times a year the schoolchildren visit their elderly friends (some of whom have dementia) to paint and spend time with them.

The activities co-ordinator at St Monica Trust said that no medication on the market had the same impact on her residents as Paint Pals.   “I never cease to be amazed how children so naturally break down barriers and how such strong links can be built despite the generation gap.  The scheme is one of the best and most positive things we have at St Monica’s”.

The loving, mutually beneficial friendship between young Delia and Old Red in “What Flowers Remember” also brought to my mind a remarkable woman called Suzy Webster who, confronted with her mum’s condition, decided that her parents should come and live with her and her young family so that they could share her “dementia adventure”.

Suzy has spoken of how much she’s learnt from her daughters: “They just see my mum; they don’t think about who she was before and who she might be at the end”.   In a guest blog for Gill Phillips’  Whose Shoes? website Suzy quotes her six-year-old saying that dementia is just part of who grandma is – “She’s good at cuddling, that’s what is important”.

The affinity between young children and older people, particularly those with dementia, comes in various guises.  The practical world of the two groups is relatively small – mainly the world of the home and the garden – while their imaginary worlds hold infinite possibilities which others around them often fail to comprehend.

Both groups’ sense of time is unlike that of hard-pressed adults rushing about trying not to be late: the very young and the very old tend to live more in the moment, savouring the here and now, enjoying a chat (hence the elderly residents of Tucker’s Ferry being so receptive to Delia’s wish to hear their stories) rather than worrying about what was or might be.

But perhaps the most poignant affinity between the very young and those with dementia lies – as Suzy’s daughter so astutely observed – in their uninhibited displays of emotion.  When verbal communication is difficult (because of dementia) or undeveloped (as in very young children), other ways have to be found to relay feelings, which are still very much there.  Frustration and fear can lead to aggressive, distressing behaviour, of which Old Red shows one or two flashes, but I’m talking about positive emotions.

Cuddles and hugs are one way, eye contact and body language another.  Children are pretty good at these – unlike many of us more reserved grown-ups.  I’ve never been a very tactile person and as I sat with my elderly mum when her dementia rendered her immobile, speechless and seemingly unaware of anything around her, I was often at a loss as to what to do.

Now, through my writing, I’ve met people who speak of manicuring their mothers’ hands.  It’s an intimate, caring, literally touching thing to do and I wonder why on earth I didn’t think of it.  Being me, I read to mum from Daniel Deronda, though I’m not sure she heard.  I wish I’d reached out to her more, soothed her, caressed her, physically showed her the love that words could no longer convey.

Shannon’s fictional young narrator knew what to do.  While her mother talked to Old Red as he lay dying, Delia instinctively held onto his hand, gently rubbing her skin over his.  “I wanted to feel connected.  Somewhere deep down, I hoped he knew it was me”.

Ultimately, it’s the connections that we make with those with dementia – however big or seemingly small – that really count.  Children seem to grasp this innately, as do some adults.  I’m sorrier than I can say that, when it mattered most, I wasn’t one of them.  It’s taken the passing of years, numerous conversations with others more intuitive than I, and the clear, sweet voice of “What Flowers Remember” to tell me how I should have spoken my heart to mum in those final, difficult years.

“What Flowers Remember”, published by Namelos, USA and shortlisted for numerous children’s book awards in America, is available from Amazon in Kindle, Hardback & Paperback, with a portion of the proceeds of each sale going to the Alzheimer’s Association.