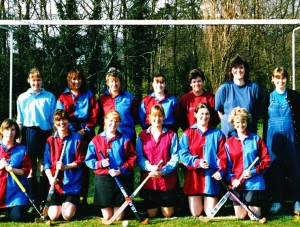 I played hockey for years, first at school and then – from my mid 20s until I was about 40 – for Leatherhead Ladies second team in Surrey. We were otherwise known as the “Lipstick Eleven” (which says it all) and even now if I pass a pitch on a Saturday afternoon I’m swept back to the days of short corners and penalty shots, of rasping lungfuls of freezing air, of orange segments at half-time and jugs (yes, jugs) of G & T on the rare occasions that we won. My recollections bring with them the unforgettable odour of the changing room: an evocative mixture of Deep Heat and dried mud, along with top notes of Revlon’s “Charlie”.

Sporting memories are powerful things. They can also be beneficial and illuminating. Take a look at this short film about Bill Corbett, “a quiet gentleman who had dementia”. To a brilliant soundtrack which begins “One day baby, we’ll be old … and think of all the stories that we could have told” – a series of captioned photos tell Bill’s extraordinary tale.

Though it was known that Bill had been a keen footballer, it was only when people trained in the art of reminiscence therapy (a way of coaxing reactions from those with dementia) sat with him and showed him old photos that they discovered he’d played for Celtic. In fact, Bill had once played for his country. On 10 October 1942 Bill Corbett played for Scotland against England at Wembley, where his team held their opponents to a goalless draw. Bill’s partner in defence that day was none other than the legendary Bill Shankly.

While not everyone has a story as extraordinary as Bill Corbett’s (who passed away in 2011), we all have one.  And this is the premise behind Sporting Memories Network, a social enterprise set up by Tony Jameson-Allen and Chris Wilkins.  The network supports community groups throughout the country enhance the lives of older people living with dementia, depression or loneliness by helping them to recall memories of watching or playing sport, using reminiscence techniques and sporting memorabilia and photos.

This simple idea has spawned numerous unforeseen positive consequences: once memories are sparked, so too, it seems, is the desire to “give it a go”, to play a bit of walking football or table tennis. Groups benefit from physical as well as emotional, social and mental activities; while men – generally reluctant to participate in therapy – are keen to come. Sport links the generations, uniting old and young in a shared love of the game, whether it be tiddly winks or rugby. Reminiscing through sport, like Heineken beer, reaches the parts that others can’t.

So successful has the network proved that in the four years since its launch it has trained over 500 people to spread the good work, joined forces with over 400 partner organisations (from sports clubs and schools to libraries and local councils), won £1.3million worth of grants and collected 7,000 sporting memories from individuals including Olympic gold medallists Sir Steve Redgrave and Dr Katherine Grainger, and the Prime Minister (who remembered, in his younger, more carefree days, watching Red Rum win his third Grand National in 1977).

The story began when Tony and Chris met, by chance, at a dementia conference in 2009 and realised they shared the same aim: to make life better for those with dementia, depression and other mental issues. The two came from different backgrounds: 48-year-old Tony, a Yorkshire man, trained as a psychiatric nurse and became a clinical team leader working extensively with people with dementia; while Chris, 54, who lives outside Edinburgh, wanted to use his advertising production skills to develop a personalised online life story album to help those with the condition.

When Tony was made redundant, the pair decided to join forces. They knew that they wanted to fuse sport, which they both loved (Tony was once a professional golfer), with reminiscence work, with which they were both familiar.

In November 2011 they registered the Sporting Memories Network (SMN). They had few materials and no money. Undaunted, they submitted a bid to the Silver Dreams Lottery Fund to run the newly formed company in three settings – NHS organisations, care homes and community venues such as day centres. Some 1,500 ideas were submitted; the network made it to the last 70 but was pipped to the post by Hen Power, which I blogged about here.

However one of the care home managers with whom Tony and Chris were working helped them develop a proposal to trial the network in Leeds and this time they succeeded in winning a grant of £20,000 to work in 15 care homes across the city. It gave them the chance to evaluate what they were doing, and to gain the support of Leeds city council, Leeds United football club, Leeds Rhinos and Yorkshire county cricket club. The manager of each club recorded a video memory and they launched the project at Elland Road, the city’s famous football stadium. Celebrity sporting endorsements and the immediate popularity of the scheme proved that Sporting Memories Network was a winner.

From then on, as Chris Wilkins explains, the story of the network is one of happy discoveries. “When we started SMN we thought it was all about wellbeing and reminiscence – just conversations really – but the network produced many more positive benefits. We knew reminiscence worked for people with dementia, but around sport it just worked really, really well”.

Tony describes how, without realising it, in sport they’d stumbled on a form of reminiscence gold. “There are so many different communities,” he tells me. “The sport itself, the playing, the watching, the travelling, the fans, the teams, the clubs, the stands and terraces – and then there are all the sensory triggers such as the smell of Winter Green, the iconic radio commentaries, the pie and Bovril at half-time”. 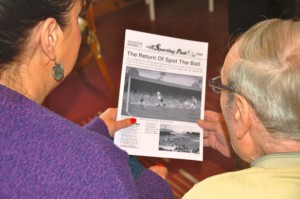 SMN produces 200 copies of the legendary “Sporting Pink” to spark memories & conversations within its groups.

Every Saturday evening SMN publishes 200 copies of the (now mostly defunct) “Sporting Pink” newspaper, complete with a Spot the Ball competition on the back page.

Superstars were soon offering support and sharing memories. Formula One driver David Coulthard was one of the first. Along with other celebrities such as Commonwealth gold-winning athlete Liz McColgan and legendary Scottish golfer Sam Torrance, Coulthard launched the network’s various Replay websites that enable individuals to share sport-specific memories – and are also available on the Replay Sporting Memories app.

Tony and Chris’s energy and passion have driven the network’s extraordinary and rapid success. In 2014 they pitched a “blue sky idea” to make the Grand Depart of the Tour de France in Yorkshire, dementia friendly.  Despite the lack of funding or equipment, the two men located local Dementia Friends champions to answer queries and interview spectators about their cycling memories at 15 of the race hubs. They found nine post graduate media students who partnered with BBC North to produce a one hour BBC Radio Leeds documentary.

Last April they secured a £450,000 grant from the Life Changes Trust in Scotland to establish 55 local Sporting Memories Network groups across the central belt of Scotland and employ four part-time project officers. A £150,000 grant from Comic Relief is helping to develop digital sporting memories resources such as e-books and apps in the north-east of England in hospitals, housing associations, libraries and people’s own homes.

This year has already seen two huge wins: a partnership with the National Football Museum and the Football Association to help gather the nation’s memories of the 1966 World Cup; and a £483,000 Big Lottery Fund grant to train volunteers in London, Gloucestershire, Hampshire, Manchester and Yorkshire to establish 64 groups over the next two years in conjunction with organisations such as libraries, sports clubs and housing associations.

Sport is a famous leveller of people – as I know through my days with Ladies Leatherhead Seconds, where top flight PAs rubbed (bruised) shoulders with youngsters working in the local Harvester. It is also, as the Sporting Memories Network shows so well, a connector of people. Its benefits – physically, mentally and emotionally – are numerous and oft-repeated. When combined with the positive effects of skilful reminiscence work, the potential for good, for the wellbeing of those who need it most, seems limitless.

One Response to Sporting Memories