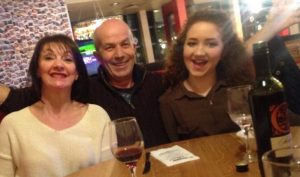 The first thing I’d like to say in this blog is: thank you.  I’m not a fan of capitals, but if I were those two words would be in the headline writer’s huge 72 point, all upper case.

My 72 point thank you is to Chris and Jayne Roberts and their family for having the courage to open up their lives – touched, moved and transformed as they all are by Chris’s dementia, which he developed at 50.   Over almost two years the Roberts, who live in North Wales, allowed CCTV in their home and used video diaries.

The result was an exceptional BBC Panorama documentary which went out this week.  Often hard to watch, particularly if, like me, you have met Jayne and Chris, it was frequently sad, always insightful and informative, and occasionally surprisingly uplifting.

I have seen them both speak at dementia conferences (dementia is the umbrella term for over 100 types of the condition, of which Alzheimer’s, which Chris has, is by far the most common) and what struck me as I watched the programme was that their life is so very much harder than they make it appear.

Kate Swaffer, an Australian living with younger onset dementia (when someone is diagnosed under the age of 65), says for much of the time she “feels like a swan, calm on the surface but paddling faster and faster below to stay afloat”.  She also says, “The paddling is imperative to maintain my dignity, as it is humiliating to show the symptoms”.

I kept thinking of Kate’s words as I watched 55-year-old Chris’s constant, very difficult daily struggles.  I’d had no idea of how severe his dementia had become, despite having seen him on several occasions.  To me, he was a sharp, clever and inspirational man.  He is.  He still is.  (Though he has now bowed out of the conference circuit).  But what efforts he, Jayne and their 18-year-old daughter Kate – who has stayed at home to help support her dad – have to make to keep their own daily show on the road.

The importance of what this family have done cannot be underestimated.  That someone as immersed in the subject of dementia as I am can have their eyes opened by an hour-long programme is quite something.  A part of me knew how hard life must be for those with dementia, such as Wendy Mitchell, Jennifer Bute, Ken Howard (to name but a few of the many with the condition who work tirelessly to increase awareness and knowledge of it throughout the UK and beyond).

But though I thought I knew, I didn’t really.  This is what the programme showed me.  For it to work required unflinching honesty – and this the family gave us.  In spades. Chris and Jayne have five children who all appeared on the programme.  Their candour in front of the camera, difficult as it obviously was to deliver at times, is an invaluable gift to the rest of us because it increases immeasurably our understanding of this most misunderstood (and feared) condition.

You don’t have to take my word.  National newspapers in the UK, from the Daily Telegraph to the Sun, ran long pieces on the programme (I was delighted that most picked out, as I did, Chris’s wonderful soundbite, “Don’t be scared, live life.  Take it by the danglies and run with it”).  Chris, Jayne and Kate also made a typically assured and articulate appearance on BBC Breakfast TV.

To be honest, the family are a journalist’s dream.  Not just because of their honesty – we hacks really do like honesty.  Honest.  But because of their fluency.  Here are a few of their best statements and it is, of course, the truth behind the language that makes it so powerful.

“The person I miss most is me”, says Chris, early on in the programme (which, I should add, was beautifully constructed and sensitively made).

Soon after he was diagnosed five years ago Chris chose the care home he wants to live in when the time comes.  I’m not sure I would have had the guts to do it, but Chris perceptively realises that in doing so he takes the burden off his family.  “It’s entirely my plan,” he tells the camera, “ – though I do have dementia”.  His ability to find humour in the worst of situations is one of his many great characteristics.

He’s astute.  Having lived five years with Alzheimer’s, his advice to others is, “Don’t forget the children”.   Through my writing I’ve discovered that how adults with younger onset dementia choose to include their children is important, delicate and difficult.   “I don’t enjoy things anymore,” says Chris. “But I’m probably the lucky one because I’ll forget”.  He may forget, but he’s very aware of the future implications of his condition on his loved ones.

Jayne is equally candid.  One of the most moving moments was when she admitted that, much as they both needed some respite, she wasn’t prepared to let Chris take it – not for his sake, but hers.  “I can’t risk him going in for a week and me not wanting him back”.  It was a breathtakingly honest statement to make on national TV. It will help thousands of others experiencing the same painful, conflicting emotions.

There was a turning point in the history of the public’s perception of cancer.  It came in 1965 when Richard Dimbleby, the “voice of the nation”, helped banish the stigma of the Big C by announcing on television that he had testicular cancer.

The Roberts family may not be the voice of the nation, but they are the voice of the 850,000 people in the UK with dementia, particularly the 40,000 with young onset.  Through their courage they have roared – with brutal honesty, yet with dignity – and their voices have been heard, written about and talked about as never before.  They’ve made a huge (72 point, capital-lettered) difference and, as a society, we owe them an enormous debt.