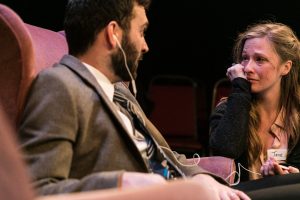 Matt Seager & Celeste Dodwell in IN OTHER WORDS

Matthew Seager’s debut play IN OTHER WORDS distils dementia – what it is to have it, what it is to watch someone you love become lost to it – into 75 minutes of riveting drama.   Playing in the intimate confines of Islington’s Hope Theatre, the two hander pulls its audience into the emotional turmoil that unfailingly accompanies this cruel condition.

We meet Arthur and Jane when they are young and in love, the soundtrack to their lives is composed of Frank Sinatra songs, the mood is upbeat.  In the space of a few seconds, the pair age in front of us.  Arthur, played with haunting conviction by the 25-year-old Seager, crumples into his chair, his eyes take on the empty stare of someone in the advanced stages of dementia.  The music stops, abruptly.  A clock ticks.  Life goes on but the lovebirds’ world has irrevocably changed. 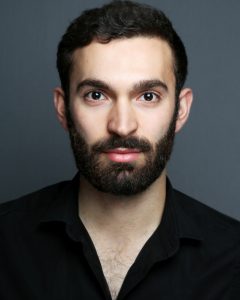 When I talked to Matthew before his play opened, he told me he’d been inspired to write it after working in sensory stimulation workshops in a dementia care home during his drama studies at Leeds University.  He vowed then to do something with the powerful scenes he’d witnessed as people who had long lost the power to speak were able to sing the words of old, familiar songs.   It was while continuing his training at the prestigious Royal Conservatoire of Scotland that he began working on IN OTHER WORDS.

Throughout this intense production, deftly directed by Paul Brotherston, the couple – with virtually no props (two wingback armchairs and an old-fashioned floor lamp) and a scattering of evocative songs – switch between life before, and life after, Arthur’s condition takes hold. 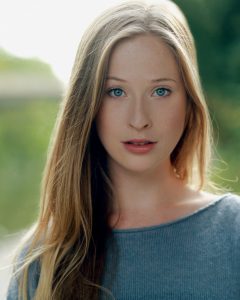 Celeste Dodwell, who plays Jane in a skillfully nuanced performance

A young Celeste Dodwell (as Arthur’s wife Jane) gives a nuanced performance that is wise beyond her years.  She portrays a woman driven to anger by her husband’s erratic, paranoid behaviour, yelling at him one minute and clinging to him for support in the next.  The ups and downs, the giving and taking, the flaming rows and never-ending confusion and grief of a married couple experiencing dementia together are brilliantly conveyed and show, in all its brutality, the impact of Arthur’s diagnosis on them both.

The saving grace is “their song”.  Sinatra’s “Fly Me To The Moon” never loses its magic for Arthur, and when things get too much – when, as Arthur puts it, “It feels like I am breaking” – the tune’s familiar phrases and rhythms pull him back from the brink.  At times, the repeated playing of the once-loved music is too much for Jane: she loves it and loathes it. “It’s one of the only things that reminds me it’s him”.

There is, as I well know, an almost unbearable poignancy to those flashes of the person as they used to be. Inevitably, for Arthur and Jane, it comes when they hold each other in their arms and dance to their song.  “It’s those moments,” Jane says, “Those tiny moments that you have to fight so incredibly hard to get through”.

Anyone who has (or has had) a loved one with dementia will find this play difficult to watch.  For the packed and largely young audience it seemed to be an eye-opener. When I spoke to one or two of them afterwards their comments centred on Jane and how hard it was for her.  As observers, I suppose we inevitably relate more closely to Jane than Arthur, a man lost in his own frightening world.

I am always amazed when young people without any personal experience of dementia instinctively grasp its complexities, its impact on those who have it and those close to them, and then – perhaps with the fresh exuberance of youth – determine to do something with what they’ve discovered.   What Matt and his company, Off The Middle, have done with their combined creative talents is remarkable.  They have opened up the subject of dementia and explored it through one, short powerful play produced with limited finances and resources.  It is an impressive achievement.

My only slight quibble is that we know little about Jane and Arthur other than that she’s an Australian.  What jobs did they have, what happened to their careers when Arthur developed his condition, did they have children and, if so, where are they?  Having said that, this is a love story told through rapidly fading memories; it is about emotion, the devastating effects of dementia and the extraordinary power of music to connect.

The play ends where it began, with Arthur hunched in his wing-backed chair.  Slowly, Jane pulls out an Ipod and tenderly inserts the little white buds in his ears; Arthur’s feet start tapping, his face tips up and he begins to smile.  Wrung out as I was after watching this clever, raw and often harrowing drama, I smiled too.

IN OHER WORDS is produced in association with the Alzheimer’s Society and Playlist for Life, a charity dedicated to bringing the benefits of personally meaningful music in dementia care to as many people as possible through the use of Ipods.

The Blame Game
The Magic Of The Mede