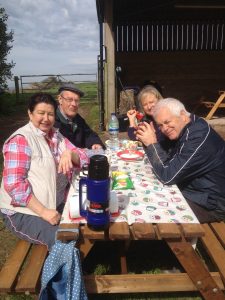 At the end of a small cul-de-sac in the charming town of Topsham, Devon sit three modest bungalows.  Only their location – each has stunning views over the estuary – hints at the magic within.  For together they form The Mede, a holiday home-cum-day club for people with dementia and their families, created by Sallie Rutledge, a former nurse whose own family was touched by the condition a few years ago.

As soon as you walk through the door – whether of the two holiday homes or of Seaward House (where those with dementia can attend a day club and, if they like, stay over with a dedicated carer) – you enter a delightful, always friendly, home-from-home, complete with resident terrier, Satchmo.

I stayed at Seaward House recently and it’s clear that, as ever when it comes to excellent dementia care, the secret lies with the people, starting with Sallie – a big-hearted woman with the determination, courage (and family support) to turn her vision into reality.

Having seen her parents-in-law struggle to take a break when her husband’s father developed Alzheimer’s, Sallie realised the couple were in need of a form of holiday respite together that simply didn’t exist, so she set about creating it.  When No. 7 The Mede came up for sale in 2007, she and her husband Guy bought it, moved in with their three teenage children, embarked on the necessary alterations and rented out their home in Exeter.  Sadly, by the time No. 7 was ready to open in 2009, Sallie’s father-in-law John had had to move into a residential home.

But the seed of something special had been planted, and in the intervening years The Mede – which now comprises No. 7, No. 8 (purchased in 2016 and known as The Summerhouse) and Seaward House – has developed an ethos of inclusive friendship and warmth.

The afternoon I arrived eight people were sitting round the table in the open-plan living area of Seaward House playing a variety of games – it turned out that four of them had dementia, the other four were carers or volunteers.  But this was irrelevant.  What mattered was the chat and laughter, the endless cups of tea, the delicious smell of freshly baked biscuits and, through the large picture windows, the expansive, ever-changing view of the Exe estuary.

Sallie explained how The Mede has evolved from holiday homes offering respite to flexible, individually tailored packages, ranging in price from about £70 for the day club to £105 for one-to-one day care and £130 per night for an overnight carer. The half a dozen carers are self-employed and the families of those they are looking after pay them directly.

“Couples would come to stay and the husband or wife might visit Exeter while we offered “sit in” services of up to two to three hours for the person with dementia, but this was a relatively short period so we decided to develop things further”.

Now Seaward House, which opened in 2014, hosts its activity day club from 10-4pm Monday to Thursday, thus giving family carers a decent stretch to themselves – and, if their relative is staying over, the possibility of a few days to recharge their batteries, sound in the knowledge that their loved one is being well looked after. 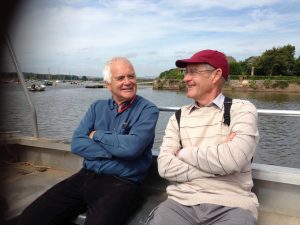 The Mede’s Facebook page gives you a glimpse into its wide array of activities – from trips to Powderham Castle and Lower Halsdon Farm (where some of those with dementia recently helped to spruce the place up for summer), to trips to The Mede’s nearby allotment and its beach hut in Exmouth.   Celebrity chef Orlando Murrin regularly comes to cook with the help of club members, while local business people such as Geoff and Anna Bowen of Topsham’s Pebblebed Vineyards give talks.

“There is usually a lack of facilities for people when they are first diagnosed, which is exactly the time when activity and stimulation is required”, explains Sallie, whose passion for what she does is clear the moment you meet her. “Our main priority is to treat the members with dignity and tailor the sessions to their individual requirements”. 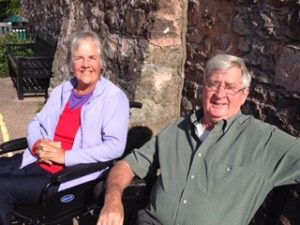 Suzy Webster’s 70-year-old mum (who, together with her husband, lives with Suzy and her family in Chepstow) was diagnosed with dementia five years ago.  They have all stayed at The Mede several times and have already booked this year’s break.  “The reassuring kindness and practical support gives us the opportunity to enjoy time together again and create memories,” Suzy tells me.

Maggie Groves, Sallie’s second in command, used to work in Devon county council’s social care department and joined The Mede two years ago.  She brings with her a wealth of knowledge about local authority bureaucracy and is the perfect foil for Sallie who, as she herself says, is a big picture person.

The relationship that Maggie, Sallie and the dozen or so occupational therapists, carers and volunteers have with those with dementia is very much like that of friends looking out for each other.  “We get to know the families so well here.   Boundaries can become blurred but as professional we know where the boundaries are,” Maggie told me.

A small vignette summed up The Mede for me.  It occurred when Alan, a guest staying at The Summerhouse, participated in the day club at Seaward House but then, due to his dementia, he began talking incomprehensibly over the other members.  Within minutes, Maggie gently and quite naturally suggested to Alan that he come to the shops with her and the couple set off, leaving the rest of the club to their chat and activities, guided by occupational therapist Sara Cross.

Later, walking into Topsham, I bumped into Alan and Maggie.  Arm in arm, they were strolling up Fore Street on the hunt for a vinegar bottle.  They’d called in at their favourite local cheese shop and now, frequently stopping to chat to familiar faces, were making their way back for lunch.

It was person-centred care made manifest.  Human connections being made, life being lived – well – by someone with quite advanced dementia.  Alan, conducting an imaginary orchestra with his free arm, was happy as Larry.

The Mede’s familiar homeliness, combined with its high staff ratio and wealth of activities on offer, make it exceptional.  It is home from home for everyone who enters it, whether or not they happen to have dementia.   It’s simple, really.  It is also pure magic. 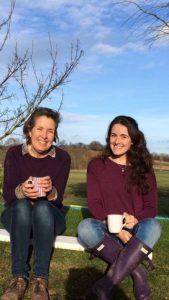 Sallie and her daughter Lucy, who volunteered at The Mede for a while

In Other Words
Creative Ageing

6 Responses to The Magic Of The Mede