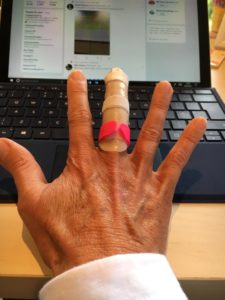 I broke the middle finger of my right hand playing tennis this summer.  It didn’t even hurt much at first, but once we’d returned home I thought I should probably go to the doctor and, much to my dismay, he referred me to a consultant.  “I think you’ll need to get that splinted,” he said.   Turned out he was right.

My finger has now been out of action for five weeks and it will be at least another couple before I can begin to think about using it, even then its naked moments will be limited to short bouts (a bit like sunbathing in an English summer). Typing, as you may have gathered from my blogging silence, is tricky.

I’m right handed, which doesn’t help.  I can’t garden or shower properly, or cook much, or write for long periods.  But (as my husband gently reminds me) my voice is functioning well, so I’ve been giving a few talks about my novel and its dementia theme, and wherever possible raising money for Admiral Nurses and Dementia UK.

In the great scheme of things, compared to the scores of people I write about who have so much bigger, more difficult issues to tackle, usually forever, my temporarily damaged digit is of course little more than a nuisance.  But it has painfully brought home to me what it is to have my daily activities limited, albeit in small ways.

And it has increased my already deep admiration for people like Chris Roberts, Wendy Mitchell and Kate Swaffer (to name but a few) who, though they have dementia, refuse to allow this to dampen their zest for life.  Instead, they turn their experiences to good use – campaigning, writing, blogging, speaking publicly – all in their own inimitable ways; all in pursuit of lessening the stigma surrounding, and increasing knowledge of, this pernicious, misunderstood condition.

It takes guts to do so.  And it takes – as I’m fully appreciating in my current state – huge reserves of patience, mental power and stamina.   A small bone in my body has one tiny, weenie piece of it broken and I swear I’m going to bed more tired than I did before because everything – everything (okay, not talking) – takes that bit more effort.

I have a renewed understanding of Kate Swaffer, an Australian diagnosed with dementia when she was just 49 who has become an international advocate for living well with dementia; she is the chair of the Dementia Alliance International (and, incidentally, this year’s SA Australian of the Year).  Last year she told the New South Wales Nurses and Midwives Association conference about the invisible toll that the condition takes on her.

“For me to function with dementia I look calm on the surface but below the surface I’m paddling quite hard even to speak.  Over the years my paddling has got more difficult and causes more fatigue”.

Yes, I really get that now Kate, particularly since trying to lift everything with my left hand has today provoked an unwanted knock-on effect on my perennially troublesome back.  As I type this (awkwardly), I have a hot compress wedged under my t-shirt (not a great look).  Once one thing goes, others follow, and dementia of any variety rarely visits alone.

I always look forward to Wendy Mitchell’s blogs on her website, Which Me Am I Today?.  She writes as she speaks so it’s as if the two of you are having a chat – a great and underestimated skill shared by some of the best columnists in the business.  I’m not at all surprised that Wendy has been signed up by Bloomsbury publishers.

In a recent blog post, Wendy described in typically witty fashion, with plenty of light-hearted emojis, a five-hour trip from her home in York to the University of East Anglia in Norwich.

Read between the lines and her account of the journey reveals what it’s like to travel with dementia: hard work. I won’t repeat it here as I could never to justice to Wendy’s way with words, but it involves buses that fail to materialise, unavailable taxis (and wonderful daughters), mislaid wheelchair ramps, train delays and too-quick connections, verbal, paper and electronic reminders and confusing, unannounced rail reversals.  Finally, through an inspired piece of lateral thinking, Wendy calms her own nerves and settles her fears.

“One day my nice journeys will outnumber my scary ones,” she concludes.  And then, as a dig at herself, “Sure I’ve said that before”.

Never moaning, always self-deprecating and forever finding solace in a humble cup of tea (I am so with her on that one), Wendy is resolute in her determination to keep going, to keep spreading her invaluable insights on dementia, whilst hiding from the rest of us the true cost to herself.  I, for one, salute her.

Several scenes from last year’s exceptional BBC documentary about the Roberts family’s experience of living with Chris’s dementia have stayed with me.  But one stood out from the rest because it revealed a rare glimpse of the anger and frustration normally so well hidden by a man who describes himself as “a master blagger”.  Sitting alone on his sofa, Chris railed at his condition.  We viewers only witnessed the scene because of the seven CCTV cameras and sensitive microphones installed in the ground floor rooms of the Roberts’ home.

In the Panorama documentary, over the course of two years, Chris and Jayne Roberts and their family allowed themselves to be filmed in their North Wales home and used video diaries to chart their day-to-day lives, transformed as they are by Chris’s dementia, which he developed six years ago, aged 50.

As the programme’s producer Maria David explains, “Chris’s incredible ability to cope and find solutions around his dementia was truly astonishing; but it left us with a problem: how were we going to illustrate the many difficulties that Chris was telling us about?”   Fixed microphones and cameras were the answer.  But how extraordinarily brave of the Roberts’ family to allow them – to bare their souls to the world in the midst of their lives so transformed by dementia.

I’ve concluded my recent talks by saying that the individuals who work so hard to enhance the lives of people with dementia and their families, humble me.  I always apologise for being uncharacteristically cheesy on the grounds that what I say happens to be true.

Chris Roberts, Wendy Mitchell, Kate Swaffer, and the countless others with this cruel condition who I’ve been privileged to meet (either in the flesh or online), also inspire me.  To keep ploughing on when the going gets tough; to keep writing, even when every second word I type has a splint-enduced typo.  So here I am, sitting at my desk, summoning up my meagre reserves of patience, stifling my expletives and using the delete button all the b+++++ time.