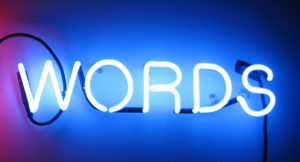 Every time I see the television clip of President Donald Trump describing the suspect in the Las Vegas attack – the worst mass shooting in modern US history – a  “demented man”, I get angry.  It was such an insensitive and harmful thing to say.  By attributing the killing of 59 people and the injuring of more than 500 to someone with dementia, Trump’s statement feeds straight into the stigma and confusion that still clings to the condition.

Words are very, very important.  I say this not just because they are my stock in trade, but because it’s true.  In the second dementia blog I ever wrote, in February 2014, I mused on the power of language and its formidable ability to communicate and miscommunicate; to soothe and to wound, to clarify and obfuscate – and to influence attitudes.  To greater and lesser degrees, words always have an impact.  Uttered in the glare of global media by the leader of the world’s most powerful country, their force is unparalleled.

The word “demented” is rarely used now, even in the context of dementia itself.  To use it in the context of the suspected perpetrator of multiple murders is as extraordinary in this day and age as it is unforgiveable.  It also got me thinking about the word itself and why Trump’s use of it provoked such a strong reaction in me.

It’s because by saying that someone is demented you turn them into their condition – in grammatical terms, you turn the noun “dementia”, into the verb, “to dement”.   There are no equivalent words for diseases such as cancer or Parkinson’s.  We don’t say someone is “cancered” or “Parkinsoned”.

So, with one word (demented), we undo all the advances that are being made around the language of dementia and the important work that is being done to inform society about what dementia is – thus positively influencing people’s attitudes towards it.

I am thinking here of phrases such as: “See the person, not the dementia” and “I have dementia, it doesn’t have me”.  By using the word demented (even in the context of the condition itself), we reverse these statements: we are in effect saying that dementia does indeed have the person, that he or she is the condition, or at least its walking embodiment.

But, as anyone who knows me or my writing will testify, I’m a glass half full girl and even as I was writing this blog I was delighted to hear on Radio 4 a wonderful interview with Edward Hall, son of the late, legendary director and founder of the Royal Shakespeare Company, Sir Peter Hall.

I hadn’t realised that Sir Peter Hall had developed dementia before he died.  Edward (himself a theatre director) described his father’s prolific career and his professional influence on him, then turned to Sir Peter’s final years, speaking eloquently about what it was like to see his father’s mental faculties fade over the last six years.

“It’s been a slow grieving process, a slow period of saying goodbye as my father came and went .. in the last couple of years sometimes he would go for months without speaking at all”.     How many of us will relate to that description.

And then, finally, Edward Hall spoke of how “extraordinarily well” his father had been looked after, first at Denville Hall, a care home for the theatrical community in north-west London, and then within accommodation at Charterhouse in the City of London.

“Caring for people with dementia is a highly skilled job requiring a lot of patience, and I’ve been very moved by the way everybody treated him, and the dignity with which they treated him, particularly towards the end of his life”.

It was refreshing to hear praise and recognition for care professionals who all too often hit the headlines for the wrong reasons.  If only a certain American whose words are heard throughout the world could have displayed the same thoughtfulness as Edward Hall when he spoke.  If only.

4 Responses to Why Mr Trump has made me angry