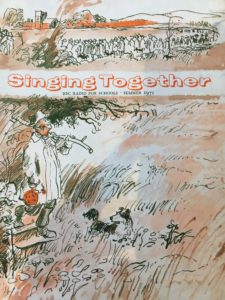 Anyone out there remember Singing Together?  It ran on BBC radio for 60 years from 1939, when it was introduced to reach schoolchildren evacuated all over the country during the war.  At 11 o’clock every Monday morning school teachers across Britain would tune in and their pupils would, well, sing together.

Back in the ‘60s, my hair in plaits, I was one of them and, hopeless warbler as I was (still am), to this day I can remember the friendly voice of presenter William Appleby and many of the words to Pretty Peña, also where I was sitting in my primary school classroom (front left beside a mesmerising painting of a cliff soaring over a turquoise sea) when I belted them out.

The great thing about the weekly programme, first aired on the home service for schools and then Radio 4, was that no matter where we children were, for 20 minutes at the start of the week, we would all be singing the same songs together.  It gave a sense of comforting continuity and community which, even now, almost half a century later, I can conjure up.

I must admit I’d forgotten all this until I recently attended the launch of an important new report by the Commission on Dementia and Music, and no less a person than the internationally renowned soprano Lesley Garrett reminded me.

It turns out that Miss Garrett CBE, as well as having the most gorgeous voice, is patron of the Lost Chord, a charity dedicated to improving the quality of life and well-being of those with dementia, using music.

Like so many of us involved in the dementia sector, Miss Garrett has a personal interest in the subject.  She told us all that when her Auntie Joan (known as AJ) developed Alzheimer’s – and even when she could no longer remember her own children’s names – “the sound of music she adored sung by someone she adored could bring her alive.  She would open her eyes, shake, and tears would pour down her face”.

There are growing numbers of dementia charities, therapies and practices with music at their heart – from Playlist for Life which uses an individual’s personalised playlist to connect with them even when their dementia is severe, to the Alzheimer’s Society’s 300 Singing for the Brain groups, not to mention the Lost Chord. 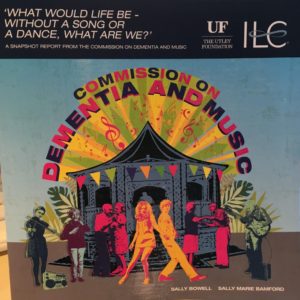 Now the Commission on Dementia and Music (whose members include experts such as Professor Alistair Burns, NHS England’s national clinical director for dementia) has produced an in-depth piece of research into existing practices with the aim of developing them further, spreading best practice and joining some dots.  The full report can be found on the International Longevity Centre UK’s website.

One of the report’s starkest and saddest revelations is that – despite the plethora of schemes and therapies – educated estimates suggest that good quality arts and music provision is currently available in just five per cent of care homes.  Five per cent!  It’s a shockingly small figure which, hopefully, the commission will help to increase through its major recommendations: to co-ordinate delivery and build intelligence, develop the research base, raise public awareness, co-ordinate and grow funding and make the best use of technology.

But in the meantime, while a staggering 95 per cent of care home residents miss out on the great benefits to be gained from music, why not – suggested Miss Garrett – introduce Singing Together for elderly people?  Whether living at home or in residential care they wouldn’t even need to have good wi-fi for it to work (internet provision in residential accommodation is notoriously patchy).  The genius of Miss Garrett’s splendid idea is that it would only take a humble radio (what we used to call a wireless, remember those?) to bring it about.

Of course the BBC would have to agree to it.  But surely this would fall perfectly within their remit of public service broadcasting?  They could step in and fill the void.  Perhaps the Alzheimer’s Society could partner up with them?  Listeners could request their favourite songs.   Neighbourhood Singing Together groups could form.  And, regardless of age or musical ability (that’s me sorted), anyone else who wanted to sing could simply tune in.

Like all the best ideas, it is straightforward and – once thought of – pretty obvious.  Lesley Garrett, you are not only a peerless soprano and a wonderfully rousing speaker, you are also a genius.  All we need now is for the head honchos at the BBC to pick up the baton and make this thing happen.

Dancing With Dementia
Somebody I Used To Know

16 Responses to Singing Together