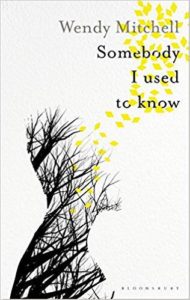 Wendy Mitchell’s memoir, Somebody I Used To Know, gives us dementia from the inside out, from the first, fearful inklings that something is wrong to the nitty-gritty of daily life with a progressive disease that gradually forces her to give up those things (from her work to her running) that make her who she is.

As such it is one of the most honest, vivid accounts of living with this condition – in Wendy’s case, Alzheimer’s disease diagnosed when she was just 58 – that I’ve come across. It is also much more.  It’s a multi-layered book: reflective of Wendy’s no-nonsense character yet also offering profound insights into the resilience of the human spirit.

A single mum with two daughters (their dad left when they were seven and four), Wendy has always been independent, thrifty and organised.  She’s also been very busy, working for 20 years as a non-clinical team leader in the NHS and, ironically, renowned for her elephant-like memory.

This all changes when, out for one of her regular runs along the River Ouse, she falls, for no apparent reason.  In fact, she’s suspected that something’s been wrong for a while though she can’t quite put her finger on it.  And then she falls again.  And again.

It takes over three months, hospital stays, neurological tests and scans, two months off work before the D word is mentioned in a letter from her clinical psychologist.  “It is possible that this is a profile of the early stages of a dementing process”.

And of course, it isn’t. Wendy’s old life has veered off track, she’s on her way somewhere else – or, as she sees it and tells it, to becoming someone else.   “We wouldn’t get on now, you and I,” she tells her younger self.  “We like different things.  You love the hustle and bustle of a busy city, whereas some days I lose hours just looking out of a window at the view.  Just looking.  Just still”. 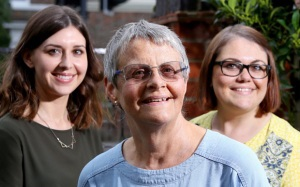 Wendy with her daughters Gemma & Sarah

It is through acknowledging the changes taking place in herself that 62-year-old Wendy realises that her dementia – hated as it is by her, as much for the havoc it will wreak on her daughters’ lives as on her own – has given her a rare perspective, focussing the mind “in a very special way”.   Yes, it is gradually stealing everything that made her who she once was.  Yet she is still Wendy.  Still determined.  Still strong.  She knows that dementia cannot take away the love she feels for her daughters (which permeates the book), or they for her.

Wendy may experience “a real, visceral grief at saying another goodbye, this time to baking”, anger and frustration at being abandoned post-diagnosis by an NHS for which she’s worked for two decades, and mortification when she forgets her daughter Sarah’s birthday for the first time in 34 years.   But she can, and does, start a daily blog to serve as her memory (which ultimately enables this memoir to be written), set reminders to ping on her Ipad, become a Dementia Friends Champion, campaign to raise awareness of the condition, promote and participate in research.  Her new life becomes as busy, in different ways, as that of the person she used to know, and be.

She is a woman in transition and we all understand – Wendy most of all – where this disease will ultimately take her.  That she has the courage and perseverance to chart her journey is testament to her remarkable nature.  That the resulting book is so cleverly crafted and eminently readable is a tribute to Anna Wharton, with whom Wendy wrote it.  Anna told me ghostwriters warned her she was taking on an impossible task but said she was determined “to capture what it was like looking out from the dementia world”.  In this, she and Wendy have succeeded.

Added to Wendy’s everyday challenges, such as cooking and washing, each far-flung event she attends in her role as a dementia ambassador requires military-like planning, an arsenal of coloured folders, ploys and devices.  So why does she do it?  Because, as she says, the alternative is to sit at home, rapidly going downhill.  “I don’t think so”.

Others with dementia who, like Wendy, campaign to raise awareness of their condition, often say this gives them purpose and exercises their brain.  At one point, Wendy takes a three week break from writing because she’s so busy and finds, on picking up her iPad, that she can no longer remember what to do.

Panic rises.  The cursor blinks accusingly, her fingers refuse to connect with her brain, her heart races.  Only the sight of a friend’s name among her emails saves her.  She sends her a message full of gobbledegook. “Copy my letters, look on the keyboard and find the same shapes,” replies her friend.  Eventually, Wendy is able to type: “Thank you.  I’m back”.

But she can’t lose the fear.  If she gives into her aching fatigue and closes her eyes, will she lose it all again?  She now knows she can never take time off.  “I have become used to looking up in familiar surroundings and not knowing where I am, but this was something else.  I was lost inside.  Screaming to get out.  It was terrifying”.

And there’s the nub of it: the dread that surely dwells inside all those with dementia – the one thing that Wendy, strong and determined as she is, cannot deny.  The disease will one day defeat her.

It is this pull, the tension between light and dark – between keeping busy, developing strategies, delighting in small acts of human kindness and surprising hints of positivity within a dementia diagnosis, versus the punishing, indefatigable force that is the disease – that makes Wendy’s memoir so compelling.

Brave, honest and at times hard to read (but imagine how very much harder to write), it will open people’s eyes to what dementia really is and change the way they think about it.  For which we all owe this Yorkshire mum – who despite her self-proclaimed “bummer of a diagnosis” still has a brilliant way with words  – a very big debt.

Somebody I Used To Know is published by Bloomsbury, £16.99 hardback.

2 Responses to Somebody I Used To Know