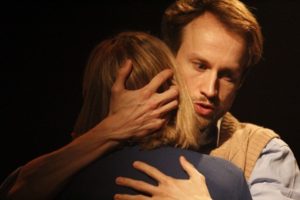 Two people, a piano stool and Tristan Bernays’ script are all that constitute Old Fools, currently playing at the Southwark Playhouse, and there isn’t even a linear plot.  Yet somehow, in just 60 minutes, we’re taken into the world of Vivian and Tom, from their first flirtatious dance, through the trials of early careers to the ups and downs of parenthood and his short-lived affair, which nearly splits them apart.  It doesn’t, they make up, because at the end of the day, they love each other.  But then Tom develops dementia and there is, for Vivian, “nothing left for me to love”.

It is a brave, raw piece that makes the audience work.  And laugh and cry.  It is both tender and brutal.  It is, says Bernays, a relationship play in which one of the characters happens to have dementia.

He may not know it, but Bernays could have been speaking at an Alzheimer’s conference.  He’s seen and drawn the man, Tom – with his precarious, impecunious musician’s career, his dreams and loves (of his partner and their daughter) and his selfish, thoughtless flaws – not the condition.   He has portrayed, too, the wife, the translator, the lover-turned-carer-turned-who-knows-what whose sense of self and identity is as broken and lost as that of her partner.   “I can’t do this anymore Tom,” she tells the man who once had the power to make her melt and who now sits, curled in a care home, silent, head bent, gripping her hand until she cries out in pain.  “If I keep coming here there will be nothing of me left”.  This is dementia in all its destructive, ugly truth. 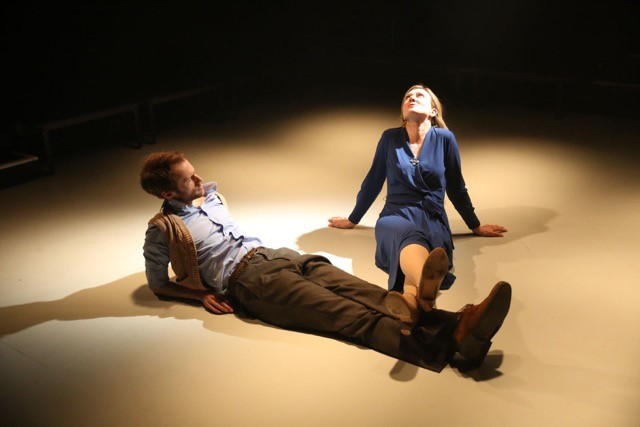 Incredibly, there are also moments of lightness and laughter, of witty banter between the two of them in their earlier days.  “I’ll call you.”  “Call me what?”  “Beautiful”.  Vivian is, of course, a linguist.   And it’s words, language eliding, slipping and sliding that guide us, the audience, through the choppy, time-travelling waters of this play.  There is nothing else – no costume changes, no scenery, just two extraordinary young actors in Mark Arends and Frances Grey, breathing life into Bernays’ lines.

After he betrays her, Vivian throws Tom out.  Devastated at what he’s done he pleads to come back home to be with Viv and their daughter.  Home, for Tom, is “you and me and us and Alice” – an often repeated refrain.  Home is wherever they are – this too has a poignancy for anyone whose life has been touched by dementia.  Those with the condition and their families often speak of “coming home” when they are with people they love in a safe, understanding environment. 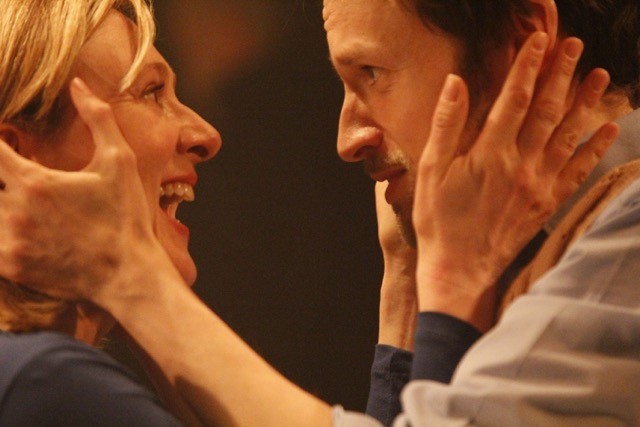 The other constant echo, the soundtrack to the couple’s lives, is the song to which they are dancing when they first meet, and when we first meet them – Fred Astaire’s “The Way You Look Tonight”.   It is the song, the soul note, to which the pair of them keep coming back, to which Tom, even with his advanced dementia, will always connect.  Its lyrics, set to the familiar haunting tune, are almost unbearably pertinent in the context of Tom’s failing mind.  “Some day, when I’m awfully low, When the world is cold, I will feel a glow just thinking of you”.

But will he?  Will she?  How much of what they’ve accrued over a lifetime together, will remain?  At the heart of this intense, challenging play is what dementia does to a relationship.  What is left when memories go?

It ends with the two of them locked in an embrace.   They are still, just, dancing together to their song, but he’s forgotten the words.  The record may keep turning, but the next step for Tom – as his medical consultant tells him – is not as simple as that.  Each case of this most feared and misunderstood condition is unique and unpredictable.

Old Fools, produced in association with Alzheimer’s Research UK, reminds us all, not just how “really bloody hard” all relationships are (to quote Bernays), but of the painful human cost of dementia, a condition that has only relatively recently come to public attention despite being the biggest killer in the UK.

It is wonderful that producer and director Sharon Burrell, To The Moon and Making Productions believed in Bernays’ short, bitter-sweet play (he describes it as “heart-warming and heart-breaking and I’d go with that) – and impressive that Arends and Grey turn in such deft, nuanced performances in the most intimate, exposed, and unforgiving of arenas.

Plays such as Old Fools, Florian Zeller’s The Father, Matthew Seager’s In Other Words, Inspector Sands’ The Lounge, all of which I’ve reviewed, bring the thorny subject of dementia quite literally into the spotlight, centre stage.  They raise awareness of it, reduce the stigma surrounding it, inform the public about it in brilliant, shocking, creative ways.  And I applaud them all.

Old Fools plays until 7 April at Southwark Playhouse & you can book tickets here. 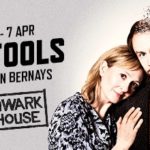 Somebody I Used To Know
The Little China Clogs

One Response to Old Fools