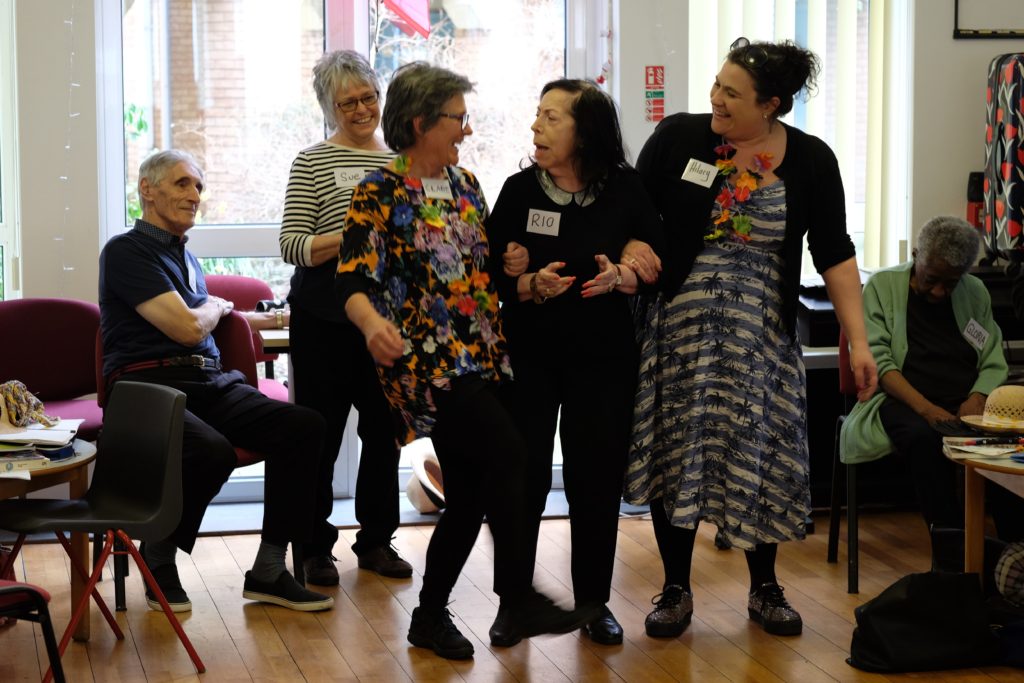 It’s not often that you get to travel the world on a Monday but recently I did just that, escaping to the sun of Barbados and the oriental delights of China via Brighton, Southend and Cuba (my geography was always appalling) then zooming back to my childhood via a pair of tiny blue and white china clogs (of which more later).

I met Rio and her husband Tony driving to Turkey in their car.  They’d loaded it up with suitcases, stashed their chocolates in the front so they didn’t get squashed and then set off for Salzburg, Bulgaria and Istanbul, where they’d had to give a backhander to the police.

It was quite an afternoon.  In fact, I was at a reminiscence session for people with dementia and their family carers in Belsize Park, London.  A mood of inclusivity, sensitivity, warmth and sheer good fun permeated the place, producing a world devoid of labels, of them (with dementia) and us (without), unencumbered by bureaucracy, titles or paperwork.  A world built on human connections.

Tony and Rio’s car was formed of four chairs.  The suitcases were empty props. The chocolates were imagined.  But we were there, with them.  Transported back in time to when the couple used to travel through Europe with a motor full of clothes to sell in markets and bazaars.  Rio, it turns out, sailed to America on the QE2 not once, but twice.  Tony didn’t go “because he couldn’t afford it”.  When the pair started singing New York, New York, at first Rio couldn’t remember the words but with a little coaxing from her man and encouraging smiles from friendly faces, she was soon belting out the lyrics.  It was wonderful to watch.  Reminiscence therapy – using that day’s theme of holidays and travel – at its very best.

There were over 30 of us sharing memories, singing I Do Like To Be Beside The Seaside, acting out vignettes of our travels and our lives and – when the picnic was produced – enjoying ice-cream cones and homemade drizzle cake, as well as Chinese treats.

When I introduced myself to 82-year-old Gloria she enveloped me in her arms.  This warm, expansive Barbadian developed dementia about seven years ago and has been living with her daughter Natasha in Kentish Town for the last six.

The two of them have been coming to the weekly two-hour sessions for ten weeks and Natasha explained that it offers her mum friendship and social interaction while also stimulating her memories.  “It changes her mood – she is happy and jovial for a couple of hours afterwards and on the way home she is very talkative. She may not remember the session but she knows it gives her a good feeling”.

It also, quite obviously, benefits 47-year-old Natasha, who gave up her job as a team leader in customer services to care for her mum.  “I do find it difficult and some days I cry my eyes out.  You feel isolated so coming here helps because you don’t feel like you are the only person in the world going through this.  The group gives mum and I laughter, the best medicine of all”.

Angela used to come with her husband Kenneth before he died last September, just before his 80th birthday.   Having suffered a brain haemorrhage 15 years previously, he then slowly developed dementia.  The couple had been married for 57 years and Angela told me that attending the reminiscence project was wonderful because when they were at home so many things were geared towards Kenneth but the sessions were for them both, as a couple.  She left it for a few months after her husband died but then thought she’d like to have the experience “from the other side”, as a volunteer.  She’s found it cathartic and, like me, believes it’s all very cleverly done.

The seeming spontaneity of the Remembering Yesterday, Caring Today afternoons belies the tremendous thought and expertise that goes into their preparation.  I arrived an hour before the afternoon kicked off, but already people were loading tables with shells, postcards, sun hats, (blue) passports and origami boats.  Three of them were volunteers, the rest were apprentices learning the reminiscence techniques developed by Pam Schweitzer, a woman whose contribution to the field of reminiscence and dementia earned her, in 2000, an MBE.

Initially a theatre director, she found herself drawn to reminiscence work and in 1983 founded the Age Exchange Theatre Trust, creating and directing 30 professional productions based on older people’s memories that toured nationally and internationally.  Four years later Pam opened the world’s first reminiscence centre in London, providing a focus for training, and in 1993, she founded the European Reminiscence Network with partners in 16 European countries. 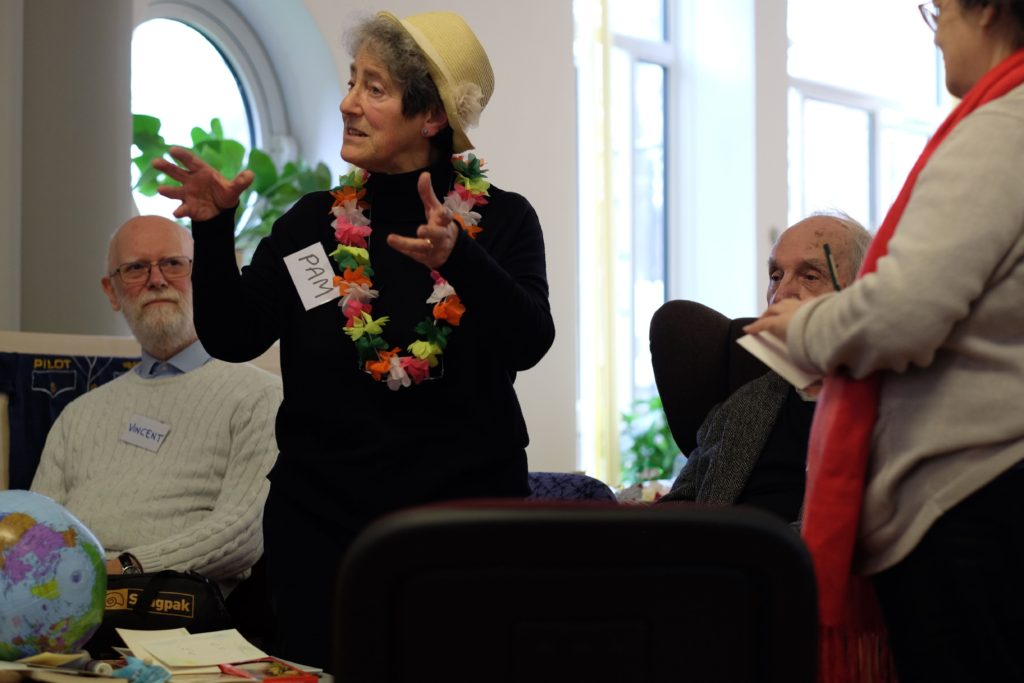 Talking to Pam, watching her as she leads the apprentices and volunteers in a warm-up session to loosen their joints and vocal chords before the attendees arrive, it is obvious she’s a born leader.  She knows how to project her voice, how to run a show, how to draw people out.

She also has a vision and a strategy, setting up the apprenticeship scheme six years  ago to ensure that the reminiscence project can advance without her (though hard to believe, she is now into her 70s).  The apprentices attend two-day training courses across Europe and beyond (there are schemes in Japan, Singapore, America and Canada).  Trainees attend 12 sessions and submit a 3,000 word essay to show what they have learnt before becoming accredited facilitators of the European Reminiscence Network.

The two day course costs £120, as does the 12 week apprenticeship scheme with debriefs and mentoring support.  The network has received £10,000 from the Big Lottery and smaller amounts from Camden Carers, Westminster Arts and the Greenwich Dementia Action Group.

Apprentice and horticultural therapist Rosie Hollands told me that week by week she sees people with dementia “opening out and relaxing”, adding that you never know what’s going to trigger a memory.

That’s certainly true.  On Gloria and Natasha’s table, among the postcards and shells was a memento I recognised immediately.  As soon as I saw it I was ten again, standing on my bed, reaching up to slide open the glass fronted cabinet and pull out a tiny pair of blue and white china clogs.  I’d not thought of them for over half a century.

On a warm March afternoon in 2018 I cradled the miniature shoes in my palm, weighing the memories – of mum and dad, my much older sister with whom I’d once shared my room, our matching rose-sprigged eiderdowns – letting the smells and emotions wash over and through me, transporting me back to my childhood.  It was a magical, unexpected moment that brought home to me, quite literally, the power of reminiscence therapy.  I knew that if I ever reached the stage where I could no longer remember much of my past, or the significance of those little shoes, the sight and touch of them would forever evoke in me happiness, security and love.

The next training and apprenticeship scheme starts on 14 May, and details can be found here. 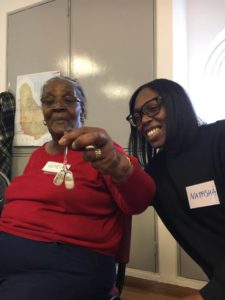 Natasha and her mum Gloria, holding the little china clogs