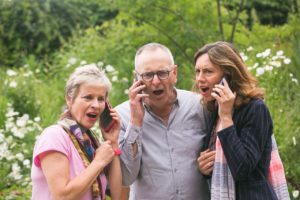 From the moment the slight figure of Francesca Lanza wandered into the nave and started to warm up her vocal cords, I knew that I was in for a treat.  Her soprano voice filled Rosslyn Hill chapel with glorious, unmistakably world-class sound.  And unlike in most opera halls, I was just inches away from its owner.

I was in the audience of The Audition, an opera starring three professionals, specially written to be performed in care settings to an audience of older people and those with dementia.

The daring concept of “Jukebox Opera” is the brainchild of Wiltshire-based Camilla Vickers who, having experienced the profoundly positive impact that her friend Francesca’s high quality opera singing had on her mother as she was dying of cancer, set up the Davina Fund so that others could also benefit.   (Camilla notes that Francesca’s singing also helped her as she cared for her mum).  From this grew HealthPitch, a fledgling organisation dedicated to restoring human connections by enhancing the lives of those who are vulnerable, isolated or in need of care.

Francesca Lanza was soon joined in the chapel by two equally spell-binding performers: mezzo soprano Louise Crane and baritone Tom McVeigh.  The trio play three out-of-work opera singers who arrive to audition for an unspecified part only to find that the director isn’t there.  Initially wary and competitive, they soften when they discover that they’ve all been out of work for some time and decide to see how well they can sing together.

The answer, of course, is very, very well.   Their combined vocal force is superlative.   The evening was inspiring.  Transformative.  Restorative.  And even though, sadly, we weren’t in a care home, I immediately understood why Camilla had been so keen for me to come.

Of course I know about the power of meaningful music for those with dementia – in fact I’m always banging on about it to anyone who will listen.  And I’m pursuing my campaign for the weekly radio programme Singing Together to be reintroduced, this time for older people including those with dementia.  Things are afoot and I will keep you posted.

But what I hadn’t thought about was how much more potent top class performances could be for those who, for whatever reason, find it difficult to communicate and connect with others in orthodox (one could say boring) ways.

Dr Claire Garabedian,  research associate for dementia studies at Worcester university and a professional cellist, understands this all too well.   A member of the HealthPitch team, she argues strongly that any performance, whether story-telling, acting or opera, has to be of a high quality if you want to engage and stimulate the hardest to reach group of people.  Which of course makes absolute sense.

She talks of the powerful communication – the conversation, dialogue, connection – between performer and audience members.  Francesca Lanza, who first sang for Camilla’s mother Davina when she was very ill a few years ago, calls it a bridge formed between the two parties and says that it’s fantastic to experience it.

Louise Crane admits that when first asked to be involved in the HealthPitch project she turned up her nose.  “How wrong was I?” she laughs.  “I would describe this as one of the most rewarding things I’ve ever done in terms of audience response and personal satisfaction”.

If you take a look at the HealthPitch film above you can see the wonderful effect that another of the company’s productions – Six Characters in Search of an Opera – had, not only on the residents, but the staff of the Old Vicarage care home in Dorset.  (If you want a quick hit of pure magic I should fast forward to about 9’ when everyone is belting out Toreador).

Activities co-ordinator Jan Millward says that hearing the opera changed the older people.  She describes one of them.  “His body language changed, he relaxed, he came alive.  He wasn’t just an elderly man sat in a care home waiting for his dinner.  He was Michael again.  It was soaring through him, you could see it, and it was the same with many of the others”.

Jan explains that when people come to live in care homes they tend to lose their identities, becoming not Mrs Smith who lives in Lilac Cottage, but simply a resident.  “We need to break those barriers down and this is one way we can achieve it”.

Her point is perfectly illustrated by the words Tez Tampling, who’s in charge of housekeeping at the Old Vicarage.  Having never been a fan of opera, she says the day that Six Characters was performed she was walking past the dining room and simply had to go in and listen.   “I have never been so moved by music in my life.  The power of their voices was incredible”.

As for the residents – the opera’s effect on them wasn’t just greater than when they listened to other live musicians, it lingered.  A couple of days after the performance Tez says that the residents seemed to have more – she hesitates for several moments, searching for the right word – “peace”.  How wonderful is that?

The big question for HealthPitch, as ever, is how the juke box operas can be sustained financially.  To date Camilla has funded them privately through her mother’s inheritance and private donations.   Now film-maker Sarah-Jayne Cooper-White plans to help Camilla develop Health Pitch so that The Audition and Six Characters are used to engage more people in care settings and among the wider public.

In her role as HealthPitch’s head of production, over the next few months Sarah-Jayne, managing director of Somerset-based branding, website and film-making company whitespace, will be creating short films and podcasts to stimulate debate around, and awareness of, the transformative power of singing and choirs, to consider and evaluate their long-term health benefits and their positive impact on social cohesion and loneliness.   The first step will be filming Health Pitch’s current tour of Scotland.

Back in Rosslyn Hill chapel one member of our audience was certainly moved.   During the performance Dr Katrin Fitzherbert, 82, who uses a wheelchair following a serious accident several years ago, was given a conductor’s baton which she used with aplomb to beat time for the assembled cast.   During the later discussions she was asked to describe the event in one word and unhesitatingly replied, “Joy!”   I couldn’t have put it better myself.