The other day I caught a mesmerising Radio 4 programme on the history of delusions. In it, Sophie (not her real name) related what it was like to suffer from the traumatising belief that she was dead.

She experienced severe depression and a numbing sense of disassociation and detachment, sitting on the sofa for days on end, waiting, feeling desperately cold.  Then, one day, things began to change “by the simple act of a friend” who came to take her out for the day.

It was a frightening step for Sophie but her friend was insistent; she drove the two of them out of town and as she changed gear, she placed her hand on Sophie’s.  That was all.  It was a human connection.  A human’s touch.

How extraordinary that something as simple as human touch could have such a positive impact.

The story, which you can catch here on BBC Iplayer, immediately made me think of the very best dementia care, which means treating people as exactly who they are: unique individuals, deserving of the same respect, dignity, time, compassion and, where necessary, comfort as anyone else.

I recalled this powerful piece of radio when I attended a recent Whose Shoes? workshop in Watford aimed at stimulating discussion around how the general hospital can ensure that those living with dementia and/or learning disabilities are offered the best possible experience when they enter its doors. 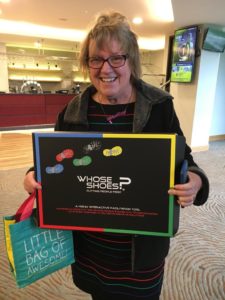 Whose Shoes? is the brainchild of Gill Phillips, whose Twitter profile (she has an impressive 26,600 followers) describes her as a catalyst for change in health and social care.  Her deceptively simple but effective board game brings together people, both within and without organisations, who are interested in specific topics – from senior management to hospital porters, carers, family and those with personal experience of the issue, illness or condition – enabling them to explore, through the concept of “walking in each other’s shoes”, the concerns, challenges and opportunities faced by all, from all perspectives.

There are no labels or titles at Whose Shoes? events, just individuals, speaking for themselves without fear of prejudice, judgement or ridicule as they discuss different scenarios.  All voices are equal, there is no hierarchy, no them and us.

Graphic illustrator Anna Geyer built up a colourful picture of the key themes based on notes written by participants.   I was delighted to hear that the patient’s voice came through clearly, that importance was given to his or her family and personal history.  That the message was to listen, not to assume, thereby affording people the respect they deserve.

Equally good to know was that high on the list was the importance of communication and language – between patients, nurses and staff; and between families and carers.    The morning, however, was more than a talking shop.  Pledges were made, which is where the full power of the person-centred Whose Shoes? approach was revealed.

Gill made it clear that she wasn’t after tokenistic gestures but pledges from the heart, what she calls “Lemon Light Bulb Moments” when individuals realise that “change is not just something that other people do but what I can do”. 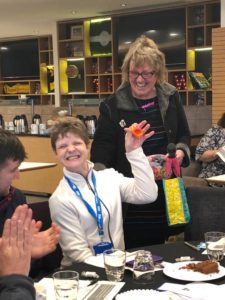 The hospital’s disability champion Heidi Buckell, 39, has cerebral palsy.  Her moving pledge was to tell midwives not to discount people.  She told a packed room of over 70 of us how her parents were told that she wouldn’t walk, let alone have a job.  In fact, she lives on her own and went to Hatfield university before taking up her post.

Earlier, Heidi had told me that the most difficult part about fulfilling her pledge would be controlling her emotions.  “I want parents to get hope and help if it is what they need,” she said.  But she admitted she gets upset thinking about what her mum and dad went through when they were given nothing but negative messages about how limited her life would be.  Heidi’s words showed the huge benefits to be had from involving “experts by experience”, those who really understand what it is to live with a certain condition or a variety of challenges – because they actually do.

Included in the long list of other pledges were: encouraging patients to “continue to be themselves”, to “see the light come back into their eyes” simply through engaging with them;  improving how  staff communicate with families and patients in order to encourage them in their own care rather than assuming that they can’t do everyday tasks such as showering.

Physio Alan Valdez vowed to be an advocate for those with dementia and learning difficulties, spotting small but important factors that other health professionals may miss and escalating them up to the multi-disciplinary team, thus hastening people’s rehabilitation. No sooner had he spoken than Bonita Sparkes, clinical nurse specialist in safeguarding said she would help Alan to fulfil his pledge by making him a safeguarding champion.

Whose Shoes? workshops are all about making human connections, empowering people and allowing them to fulfil their potential to enhance lives.  Which brings me neatly back to Sophie, the unfortunate woman who believed she was dead and was eventually helped by her friend’s soft, human touch.

Sophie also attributed her recovery to the love and concern of family and friends. Daniel Freeman, clinical psychologist at Oxford university, asked her if she thought that it was this support “and of course that direct touch on your hand from your friend” that had helped her to overcome her distressing delusion.

Sophie’s answer has an astonishing resonance for those with dementia and learning disabilities – indeed for all of us.

“I suppose that somebody taking that care for me touched me in my heart. Navigating full-on delusions you need help, someone’s got to reach out to you, to find you, which is why I’d say to someone with a family member or friend who has gone in that direction, don’t step back, try and reach out, that real human connection will make a difference.  I could feel that human connection when I was far out and lost”.

So many of us at some point in our lives feel “far out and lost”, whether because of physical or mental illness, bereavement, dementia, emotional traumas of one sort or another.  We all need people to reach out, to find us, to touch us and comfort us.  Gill Phillips’ Whose Shoes? workshops provide a safe space for people to explore how they can best do this in a professional capacity, but surely, in truth, it’s what we all need to do for each other.

One Response to Only Connect