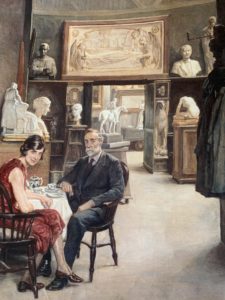 What do you see when you look at this painting?  A couple in the foreground who look a bit bored in what looks to be a gallery or artist’s studio?  Or perhaps your gaze goes straight to the collection of impressive looking busts and the striking white horse which, it suddenly hits you, is bang in the middle of the piece.  No coincidence, surely?

These thoughts and questions were raised by a bunch of about 16 of us gathered in one of the fine collection rooms of London’s Royal Academy the other morning.  None of us knew what the painting was called, or who it was by.  We were simply observing closely, guided by two experts. Within the space of a few minutes we had been drawn in, our day to day lives forgotten, our attention riveted on a piece of painted canvas.  Another world.

Dr Brian Morris, 76, wondered why the slumped, seated figure on the right had no head.  It could be, explained Kim Jacobson, one of the artist educators steering the discussion, because the woman was bent over, her back to us so her head was obscured.  An explanation which, on careful examination of the sculpture in the painting, seemed eminently feasible.

Penny Davis observed that the woman in the foreground seemed to be keeping herself to herself, that there was a calmness about the couple.   There was broad agreement that the pair knew each other and were comfortable in each other’s company.  As to their relationship, a long debate ensued as to its nature – friends, uncle and niece perhaps, or father and daughter, lovers even?

The great thing about the morning was that each contributor’s opinion was as valid as the next.   Unless I’d been told I wouldn’t have known that at least half those present were living with dementia.  For we were all enjoying one of the Royal Academy’s monthly Monday morning art, coffee and conversation sessions for people living with the condition (for more information, see the link here)  .

It turned out that Dr Morris, attending with his wife Marian, had been diagnosed with Alzheimer’s six years ago.  “Brian has good days and bad days” she told me.

“Coming to the art session gives him a good day because he’s living in the moment and not worrying that he’ll get something wrong – his opinion of the painting is as valid as that of the person sitting next to him”. 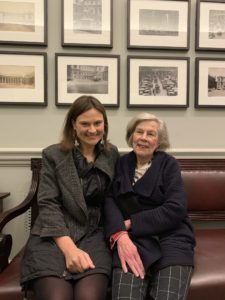 Penny Davis and her daughter Harriet at the Royal Academy

Seventy-seven-year-old Penny who had come with her daughter Harriet was diagnosed in 2016.

Here, in the Lee and James C. Slaughter room of the Royal Academy we were all existing in the here and now, in front of an intriguing painting, free to say as much or as little as we wished.  No labels.  No discrimination.  No stigma.  For myself, I found it very refreshing to take time out of a busy life to simply stop and stare and think.

The morning, with its emphasis on living in the moment, reminded me of an early blog I wrote about a report with some innovative ideas on how to improve the lot of those with dementia.

One the most controversial suggestions of the report, commissioned by Red and Yellow Care (now rebranded as Halcyon Doctors) is that in the process of helping people with this cruel condition to live well, too much emphasis is placed on memory, on things as they once were, instead of things as they are.  It’s a notion that defies conventional thinking, which often sees those with dementia being surrounded by objects and photographs from their past in an effort to make them feel happier and more secure.

The report cites Nobel Prize-winning psychologist Daniel Kahneman, who draws a key distinction between what he calls the “remembering self” (our memory of our experiences) and the “experiencing self” (the elusive here and now which those of us with busy lives rarely stop to dwell in).  Kahneman suggests that we should all suppress our “remembering selves” a bit and focus more on the present.

The report says that Kahneman’s theory has implications for those with the condition. “One might even argue that the growing inability of people with dementia to remember – coupled with their often uninhibited approach to enjoying happenings in the moment – has something to teach those without dementia about the value of the experiencing self”.

When the actor Timothy West spoke of his wife Prunella Scales losing the ability to remember things very well because of her Alzheimer’s, he described how much the two of them enjoyed their leisurely canal trips.   “You don’t have to remember things on the canal.  You can just enjoy things as they happen – so it’s perfect for her”.

Meanwhile, back at the RA, we finally discovered the name of the painting.  It was Tea in the Studio,  an oil on canvas painted in 1932 by Arthur George Walker RA and the two people having tea were in fact the artist’s brother Harold and a friend.

This was intriguing.  But in the scheme of things it wasn’t really that important.  What mattered was the taking part.  The discussion.  The engagement.  The stimulation.  All of us, to paraphrase Kahneman, let go of our piled-up cares, the other bits of our lives, and focused on what was in front of our eyes in the here and now, on our experiencing self.  It was rare, and wonderful.

Occasionally, just occasionally, dementia throws up a tiny morsel of something good to think about.  At the Royal Academy the other Monday morning, it did just that.