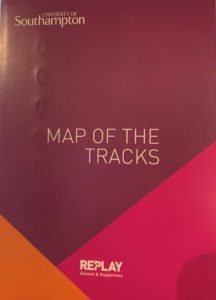 An envelope arrived in the post the other day from Southampton university.  In it was a map – a Map of the Tracks.  Intrigued, I unfolded the purple and pink paper to be met by names and places that swept me back to my uni days.

There they all were: Swaythling, Burgess Road (it had a good bakery that sold a mean iced bun), Bitterne Park, The Avenue.  I had a sudden, painful recollection of cycling up Portswood Road, battling against icy winds to get to my Monday morning lecture on Paradise Lost.

More enticing were the questions posed beside these evocative locations.  “What memories do you have?  Do you think of a particular time and place? Is it the union back in the ‘60s?”  Er, not quite – I was still in short socks then.

But imagine my delight at seeing these words: “What about the music of the time?  We want to know which track takes you back every time you hear it”.

Excellent!  And easy too.  Joni Mitchell’s Big Yellow Taxi skids to a halt and I’m in my dingy little room in Montefiore Hall – a large, rundown place in which a handful of other girls and I occupied the only female floor.

Needless to say, I soon found myself a boyfriend.  Jon played Pink Floyd’s Another Brick in the Wall on a non-stop loop as he made endless cheese toasties in a special machine, the likes of which you never see now.  Ian Drury and the Blockheads played at the Gaumont.  I saved up to see them: Ian – and his rhythm stick – were fab-u-lous.

How quickly music summons up your past, as all of us involved in the dementia sector know only too well.

Another Ian – Big Ian Donaghy, care trainer, musician, author, speaker – popped up on my Twitter feed last week asking similar questions to my old alma mater.  “What songs take you to a point in your life and break your heart?”

My answer was swift:

“Once in Royal David’s City: mum & I listened to the Nine Lessons & Carols from King’s College on Xmas Eve, day before she died. She had v severe #dementia by then & mainly slept but when she heard it she opened her eyes. Can’t hear it without my heart crumpling”.

Plenty of other tweeps joined in with their thoughts.

The Big Man was seeking songs for a choir to sing at the Care Show in Birmingham, where he was a keynote speaker.  This wasn’t an official choir, a Singing for the Brain choir or a community choir, but one that Ian created by dashing around the conference asking anyone and everyone if they’d like to join in his session at ten past two.

Such is the forceful passion of the man that 200 people – care staff, managers, owners, influencers, singers and non-singers, the tuneful and the tone deaf – joined him and his guitar to belt out songs.  Ian’s mantra is “Dementia Is A Team Game” and he’s nothing if not inclusive.  It lies at the heart of all that he does.

Big Ian knows only too well the power of music to connect to those with even severe dementia.   When his mother-in-law Liz died a few months ago aged 66 she’d been living with dementia for several years.  Ian says that right up till the end, when everything else had been taken from her, Liz was still singing.  She had created a playlist with 200 songs, including John Denver’s Annie’s Song and Leaving on a Jet Plane (two of my favourites), which all her carers knew. 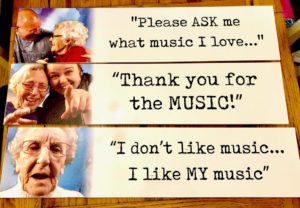 At 49, Liz chose all the music for her funeral.  This was very important: the family were able to respect her wishes because they knew what they were – so often loved ones are left guessing.   Whenever a song Liz liked came on the radio, she would say she wanted it at her funeral.  “I used to joke that her funeral would be like Live Aid with a box!” Ian tells me.

In the last year or so Big Ian has made several short, punchy films highlighting his love for music and his passion for bringing it to those with dementia.  One of the most moving involves yet another Ian.  In his mid 60s, he has progressive supranuclear palsy which means he can no longer communicate verbally.

Big Ian visited him at Landermeads care home in Nottingham and, hearing that his namesake used to enjoy Paul Young, decided to play his guitar and coax him to sing a duet.

“It was astonishing,” says Big Ian.  “He had the room in tears.  By the end he was leading the song – there were parts where he came in before me and then, at the end, when he sang ‘Every time you go away, you take a little part of me,’ he tugged at his shirt and motioned at me”.  I’ve watched it and warn you now: you may need a hanky.

Big Ian is right.  Dementia is a team game.  If we all join in it makes a difficult situation better.  At the beginning of the year I wrote a blog about togetherness which struck a cord with readers.  Musing on the way we humans invariably think in terms of “them and us” rather than “we” – those living with dementia versus us or those who are old versus us – I concluded that this division helped breed stigma.

Before my mum was diagnosed with dementia I knew very little about it – I metaphorically crossed the road to avoid it.  Once she developed the condition, my view of it altered irrevocably and very much for the better.

I wrote in my blog:

“She was my mum.  So, she happened to have dementia.  She was still my mum, with her big heart, her eccentric ways and her numerous faults.  At a stroke my attitude changed and any notion of dementia existing somewhere else, over there, in other people’s lives, evaporated.  We are all in this together”.

My words echo Big Ian’s philosophy.   The man’s a musician.  He’s also a showman with a massive heart.  He knows the power of music to break down barriers and connect – hence his impromptu choir.

As he tells me, “If we all join in no one feels uncomfortable.   If we’re all ridiculous, no one’s ridiculous.  It’s like if you and three mates start dancing, then it’s alright because somebody has broken the seal”.

Immediately I’m transported to the uni bar.  It’s a Friday night circa 1981 and I’m grooving round my rucksack of books to Kim Carnes’ Bette Davis Eyes.  Of course I am.   So is everybody else.  Aren’t they?  If they’re not, they should be. 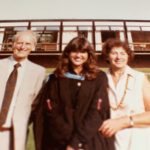 My graduation from Southampton University in 1982, with mum & dad

Only Connect
The Longest Farewell