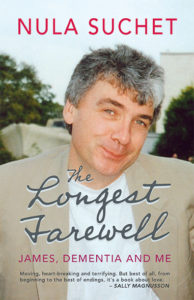 The Longest Farewell is a hard book to read.  It is also an important book with a profound and, against all the odds, ultimately hopeful message.

In it, Nula Suchet speaks the unspeakable: she rails against “the bastard dementia” that afflicted her late husband James Black aged 57, leading them both on what she calls “our journey to hell”.  The pages hum with anger, frustration and guilt – yet her tale ends with a magical twist that renews our belief in the power of humans to connect, even in adversity.

In telling their dementia story warts and all, Nula highlights the common themes that crop up so frequently when I speak to those affected by the condition, either directly or indirectly.  There’s the drawn out diagnosis; the impersonal manner of some medical professionals; the diminution of identity.

“Dementia is destroying everything.  My marriage, my dreams, my finances, even myself.  Everything is subsumed by the soul-crushing grind of being a carer to the empty shell that is now my darling James”.

It is raw, uncompromising language, riven with pain.

Even more chilling is her family’s reaction when she and James leave their home in Ireland to find residential care for him in England.   No one says goodbye.  Nula thinks this is because they don’t know what to do or say.  “It is as if he’s become a non-person.  If he had been diagnosed with cancer they would see him as a brave battler, but dementia frightens them”.   I’m sure she’s right.  Dementia used to frighten me, but it no longer does because I have a much better understanding of what it is.

Nula’s love for James sustains her, just – and music is one of the last things she refuses to give up on for her opera-loving husband, who’d been a highly successful television director and writer.  In the early stages of dementia he wept when she played him CDs of Tosca and La Bohème – responding viscerally to one of the greatest joys of his life.

When she takes James to live in a care home she puts on The Marriage of Figaro, his favourite Mozart opera, and immediately he stands up and starts conducting the music, a huge smile on his face.

“I can’t breathe.  I move to wrap my arms around his body and hold him tight so he can’t see me cry.  I want to run out of the room with him and take him far away from the world of care homes and dementia”.

This poignant incident will resonate with anyone who’s had to place a loved one in care.  When my mother was dying of dementia, I witnessed the incredible power of music to connect (and wrote about it here) and am now passionate about spreading the message.  I’m still pursuing my campaign to persuade the BBC to bring back their old radio programme Singing Together, originally aimed at children, this time for older people and those with dementia (see here).

When James’ worsening condition forces her, with reluctance and guilt, to place him in a care home she meets a man who knows just what she’s going through because he is too.  It is the broadcaster John Suchet, whose wife Bonnie has Alzheimer’s, and their shared experience brings them together in “the strangest dance of love and care” which ultimately, following James’ and Bonnie’s deaths, leads to John and Nula marrying. 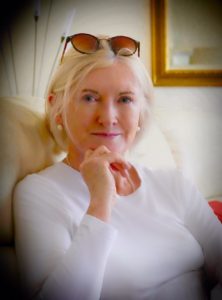 Love, then, squares up to dementia.  It can’t prevent James or Bonnie from suffering or dying, but neither can it be destroyed.  Nula lays bare the devastating impact of James’ Pick’s disease (a rare form of dementia affecting behaviour, emotional control and ability to communicate) not just on him, but on her.

The resulting book is one of coruscating honesty that is well worth a read – but not, I would counsel, if you or a loved one are in the throes of what its author describes as “soul-destroying and utterly frightening years”.  Wait until your personal encounter with the UK’s most feared condition is over.

Occasional moments of magic temporarily ease the pain.  The house is suffused with the scent of sweet peas that James has grown and placed in every room, and when Nula goes to her car she finds little bunches of the flowers on the driver’s seat and dashboard.  “It’s his only way of telling me he loves me,” she says, and you hear her heart breaking.

It is in the care home that Nula meets first Bonnie, with her “strange and ethereal beauty” and then her husband John Suchet, to whom she feels “an instant connection.”  As their friendship develops into something more it is inevitably hard for them both.  Nula is a wife visiting a husband she adores but to whom she hasn’t been able to connect for years; she’s also establishing a relationship with another man.

John Suchet, incidentally, is as convinced of the power of music to enhance the lives of those with dementia as I am.

“Music is medicine to those with dementia, able to bring comfort and joy when nothing else can,” he told me.  “Bonnie smiled and tapped her feet along to Abba when words no longer held any meaning”.

The book never leaves you in any doubt about Nula’s love for James, or John’s for Bonnie.  And towards the end, battered by their experiences, their spouses’ suffering finally over, their burgeoning love almost destroyed by the bastard dementia, Nula and John come together and find peace.

When John Suchet’s book on Mozart is published he dedicates it to the memory of “Mozart lover James Black”.   While Nula ends her work with words of hope. After a decade of flat hopelessness, her creative energy rises again like sap.

“I’ve changed as a person.  The loss of James has made me see life in a different way.  I’m a bigger, better person because of it.  My life now, once again, is about love”.

It is a life-affirming end to an immensely sad and painful story.

The Longest Farewell, published by Seren Books, is available from www.serenbooks.com & Amazon