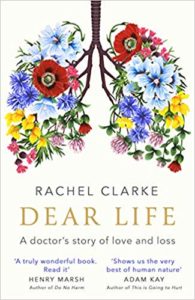 An elderly man appears on a hospital’s A & E list one Friday night.   Michael Richardson’s pacemaker has literally exploded out of his chest and he is now cradling it gingerly in his hands, “slithering in blood and pus”.

Dr Rachel Clarke’s first instinct is to shove the thing back inside.  Her second thought is why on earth didn’t this man, who is in his late 80s, seek help earlier instead of waiting until his infection had spread, festered and finally blown up.  The answer, as she so eloquently describes in her book Dear Life, is that “something meant more to Michael than his own heart – that of his wife of fifty years”.  For Mary, it seems, has dementia and Michael is her sole carer.  If he went into hospital, who would care for Mary?

Busy as she is, Dr Clarke sits beside the distraught Michael, listens to his story and coaxes him to tell her about when he first met the vivacious young woman who loved dancing and whisky.  Despite Rachel’s efforts to comfort him nothing can take away Michael’s pain at the thought of his wife being whisked away by social services to an emergency care home where she will almost certainly have to remain, confused and frightened.

For Rachel, however, one incontrovertible fact stands out amidst this pain: today she’s met a man who so loves his wife that he’s prepared to sacrifice his heart for her.

“In the end, when death bears down, there is always this, the love of others.  Greater than nowness, greater than nature, greater than moments of sensory pleasure: the power of human connection”.

A specialist in palliative medicine, Dr Clarke delivers profound messages through simple stories.  Her book opens with dramatist Dennis Potter’s famous description, during a 1994 television interview, of the “whitest, frothiest, blossomest blossom that there ever could be.”  Two months later Potter was dead.  But, as Clarke says, his extraordinary interview with Melvyn Bragg filled viewers’ minds with the sheer theatricality not of dying but of living.

“Death’s imminence, its claim on his future, had given Potter licence to live like a child in the present.  Every second sang”.

Every page of Clarke’s book swoops and soars with humanity.  It is at once a gloriously worked text in the field of palliative medicine and dying, and a love letter to life – embossed, imbued, infused with care.

In it, Clarke reveals her sensitivity and her innate understanding of the healing potential of things other than medical skill.  But, as a doctor , she also knows how quickly her profession can become inured to, detached from, the people they seek to heal – even as they fight to preserve their instinct for kindness.

“I saw doctors and nurses who had barricaded themselves away from the human beings they tended, becoming hardened and withdrawn, simply to survive”.

Yet amidst all this love and loss, Dr Clarke herself never loses compassion.

“Above all, when your focus is people, not body parts, taking time to listen to your patients’ words – seeking truly to understand what matters to them – can have astonishing potency”.

It is all so obvious, really. The title of my very first blog was “People not body parts”, a phrase borrowed from the then Health Secretary Jeremy Hunt.  It was 2014 and Mr Hunt was announcing changes to ensure that an NHS patient was seen as “a person with a name and a family” rather than “a part of the body where things have gone wrong”.  Incredible really that such an announcement was needed.  And have his words been heeded?   I wonder.

Two years later, in 2016, I gave a speech at the NHS Confederation entitled “At the heart of all care is the person”.  I apologised for making what might seem to be a statement of the bleeding obvious, explaining that in the case of my father’s treatment by the NHS, the obvious – the person at the heart of the care – had all too often been forgotten as protocols and systems took centre stage. 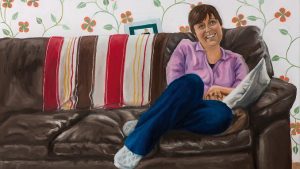 Kate Granger, painted by Antonia Rolls for the A Graceful Death exhibition.

Like Dr Clarke, the late, great Kate Granger was a doctor (a consultant in geriatric medicine) who understood the power of small acts of kindness – of human connection.  The knowledge underpinned her “Hello my name is” campaign, encouraging and reminding all healthcare professionals to introduce themselves to their patients.

Dr Granger’s inspiration came when she developed cancer and found herself on the receiving end of NHS care.  During one emergency hospital admission she lay on a trolley in severe pain as various medical professionals approached her.  Not one of them introduced themselves or interacted with her; she said she felt like one of the mannequin arms on which trainee doctors practice their skills.

It was only when Kate met Brian, a porter, that her faith was somewhat restored – he introduced himself and was the first to recognise her pain, wheeling her trolley with extra care.  During the three weeks that Kate remained in hospital, the majority of healthcare professionals failed to introduce themselves.

Behind the simple message of “Hello, my name is” lies a profound truth: that patients are people, that through the small act of sharing names you can bring about a powerful mind change.

Dr Granger knew that scientific medical skill, as all of us involved with dementia know only too well, is only part of the healing, caring process.  Dr Clarke also understands this.  As she writes,

“The spoken word, I had come to realise, could be as delicate and important as any physical intervention, and sometimes equally life-changing”.

These two inspirational doctors remind us all of the importance of kindness, the power of communication, and the absolute necessity of human connection, without which we are – to paraphrase a former Health Secretary, reduced to body parts not people.

Dear Life, published by Little, Brown, is available at book shops and Amazon.