Singing Together (part 2). No Ifs No Buts. For All Of Us. 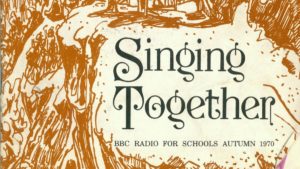 Amidst the worry and fear of the COVID-19 outbreak something wonderful is happening.  We’re Singing Together.

When Gareth Malone’s Great British Home Chorus launched online this week – 15,000 of us from around the globe joined in live and a whopping 86,000 watched the show afterwards.

Musician James Sills beat Gareth to it when he introduced the Sofa Singers last Friday as a response to self-isolation. Within ten minutes all 500 places on his online weekly sessions were taken.   His mission: to bring people together from around the world to “spark joy and human connection”.

You only need look at this BBC news clip on YouTube to see the joy sofa singing brings to so many people feeling discombobulated, isolated and frightened by the new situation in which they suddenly find themselves.  “I beamed from ear to ear,” says one sofa singer. “It  was a thing of beauty – it really was heart opening”, adds another.

This is all brilliant.  But let’s not forget that there are people for whom discombobulation and isolation are often the norm: those with dementia and their family carers.  For whom singing could enhance their quality of life.

Yet the sad fact is that a significant percentage of care homes – 70pc of whose residents have dementia – don’t have the WiFi needed to log on to these virtual choirs.

Last summer a survey by carehome.co.uk revealed that 16pc of staff don’t even know if their care home has WiFi.  Of those homes that do, the service is mixed, with 18pc saying WiFi is only available in communal areas and 45pc saying access is available in both bedrooms and communal areas.  Even if older people living in their own homes have WiFi access , many of them cannot use it or find it confusing or frightening. 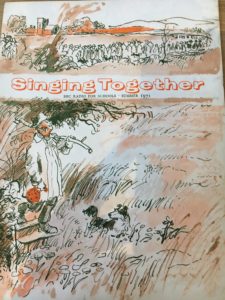 Which is why two years ago I campaigned for the BBC to reintroduce its weekly children’s radio programme Singing Together, this time for older people and those with dementia.   The operative word in that last sentence is “radio”.  No WiFi needed, just a good old-fashioned wireless.

The original Singing Together programme was introduced in September 1939 – long before the internet even existed – to bring together schoolchildren evacuated at the outbreak of war.  It ran on the BBC until 1999 – I remember it from my schooldays in the ’70s.

Every Monday at 11am my classmates and I would follow the lead of its presenter William Appleby to sing One Man Went To Mow and Linden Lea, aware that all over the country children just like us were singing the same song at the same time.   I’m pretty much tone deaf but the very act of singing together still gave me a lovely warm glow.

The idea for the corporation to reintroduce the programme wasn’t mine but that of internationally renowned soprano Lesley Garrett .  Miss Garrett made her suggestion at the launch of a report by the Commission on Dementia and Music that proved, beyond doubt, that listening and singing songs enhances the mood, speech, behavioural and psychological symptoms of those with dementia.  The report also revealed, shockingly, that good quality music therapies are available in only five per cent of care homes.

Despite the brilliance of Miss Garrett’s idea, I am afraid it fell on deaf ears.  My letter to the BBC’s Director General signed by key figures in the dementia sector, elicited a polite no.  Lord Hall cited dementia initiatives (such as its free sonic archive of over 16,000 nostalgic clips) to which the corporation is already committed.

But these downloadable noises are nothing compared to the life-enriching benefits that a regular weekly sing-song to the radio would offer those with dementia and their hard-pressed families and carers – as I said in an article I wrote for the Daily Telegraph.

My point was well made – by the BBC itself – when last year it aired Our Dementia Choir, a two-part documentary hosted by Line of Duty’s Vicky McClure demonstrating how singing literally changes lives.  The wife of 67-year-old Chris, who has frontal temporal dementia, said,

“What you’ve given Chris is unbelievable”.

The Coronavirus crisis has brought out the best in the BBC at a time when its funding, structure and national role are under threat.  It is fulfilling its public service remit and coming into its own.

The health and well-being benefits, the popularity and sheer joy to be found in coming together and singing together, particularly in adversity, are there for all to see in Gareth Malone’s Home Chorus – or the Home Malone choir, as he (and I) prefer to call it – and James Sills’ Sofa Singers.

“Because life is better when we’re singing together”.

For no one is this more true than older, isolated people, those with dementia and their families – many of whom don’t have access to the internet.  The genius of Miss Garrett’s idea lies in its inclusivity and simplicity.  Forget URLs, service providers, superfast fibre (I prefer Bran Flakes), portals and networks – and simply press a button on your radio.  Grandpa in Nottingham can tune in at the same time as his daughter and her family in deepest Devon – to listen and sing.

There has never been a better time for the nation’s favourite Auntie to ensure her place in our hearts, help to secure her future and brighten all our lives by reintroducing Singing Together.  On the radio.