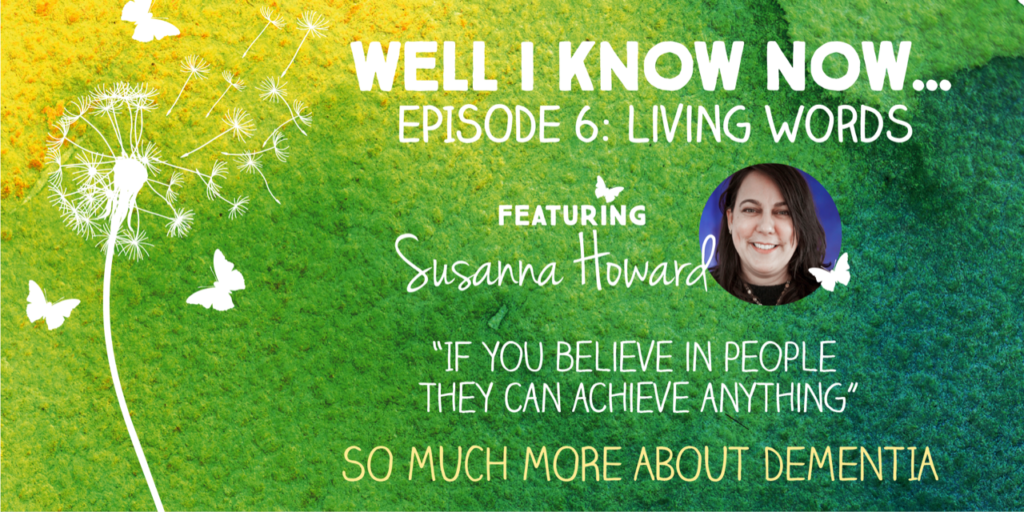 You can listen to this week’s and every Well I Know Now podcast by clicking any of the following: Apple iTunes, Acast, Spotify, Google, Podtail or Castbox.

When her own life hit a rough patch and she was brought very low, actor, writer and television producer Susanna Howard quite literally wrote her way out of it. She let her words flow onto paper, never letting her pen stop and not allowing herself to think too much.

The results surprised her. “I was reconnecting to myself,” she says.  Realising she was onto something, she decided to share the idea and help others who, like her, had found themselves in a dark place, for whatever reason. Susanna believes, wonderfully, that “If you believe in people they can achieve anything.”

From a pilot project in the elderly care unit of Guys and St Thomas’s in 2006 her work has grown into the charity Living Words. Now Susanna and her team of trained artists run three month long care home residencies, working one to one with people in the late stages of dementia who would normally be considered unable to communicate, carefully and skilfully enabling them to do so through their own words.

This week’s podcast is played out with Funny Old World, lyrics by John Offen who is living with advanced dementia and Susanna Howard (listen here). John’s words were set to the music of Marit Rokeberg and sung by London Contemporary Voices.

Barbara Pointon
Why My Care Matters