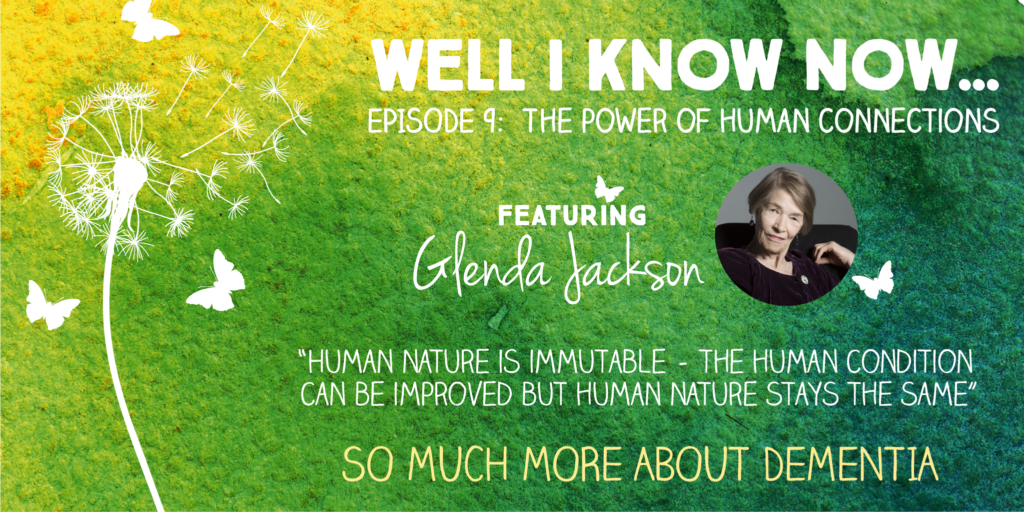 You can listen to this week’s and every Well I Know Now podcast by clicking any of the following: Apple iTunes, Acast, Spotify, Google, Podtail or Castbox.

To launch my second series of Well I Know Now podcasts I talked to the multi-award-winning star of stage, screen and television Glenda Jackson.

Her career is remarkable, not only for its dizzying success, its longevity (she was playing King Lear on Broadway last year), its unparalleled range (she took time off from acting to be a Member of Parliament for 23 years) but its beginnings. If it hadn’t been for the intervention of her Boots manager, who asked Cheshire County Council to pay for RADA , the teenage Miss Jackson might never have become an actor.

I interviewed her to talk about her BAFTA-winning role as Maud in the BBC film of Elizabeth is Missing. This intriguing whodunnit, based on the excellent novel by Emma Healey which I reviewed here, also provides a deft exploration of dementia and the strains that it places on family life.  Glenda plays Maud who, while in the early stages of dementia, sets out to find her missing friend Elizabeth and in so doing solves a 70-year-old murder mystery.

The actress and I chat about why she took on the role; how we as a society can no longer ignore dementia; the financial, emotional and practical challenges facing those who live with it and their families and the part that the state plays in all this.

We also talk about ageing, which Glenda believes fractures and frays the gender boundaries – a fascinating idea which I’ve not previously encountered.  And the way in which an ideal society has parallels with one of those magical pieces of theatre that completely captures its audience – both are bigger than the sum of their parts, require everyone involved to play their role and generate a positive, reciprocal energy.

The daughter of a bricklayer and a cleaner, the girl from the Wirral has come a long way and never lost touch with her roots, her work ethic or her humour.

NB At the time of posting this blog the podcast wasn’t available on Apple through a laptop – though bizarrely it was on an Iphone! – so if you can’t find it on Apple try any of the others. It IS there!

Where Memories Go
We Will Remember Them