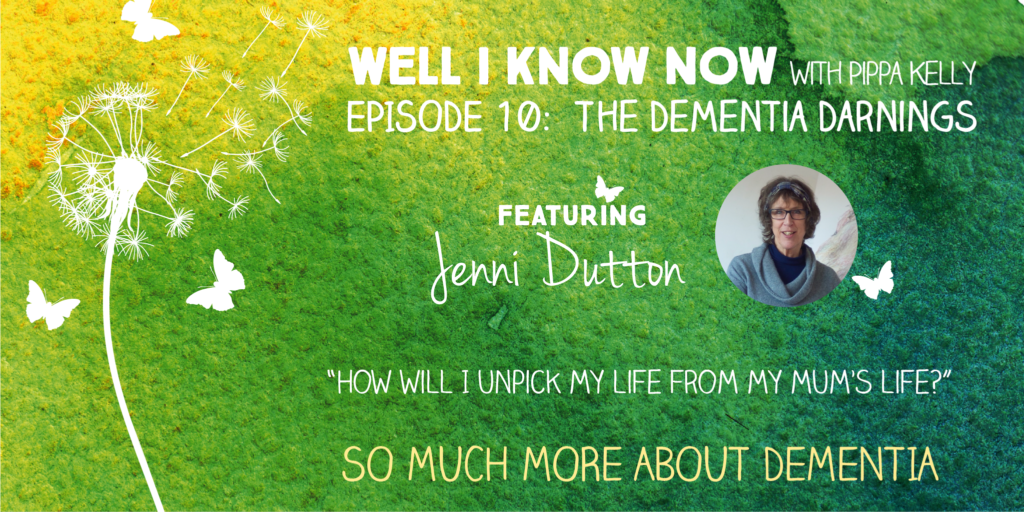 “Jenni Dutton’s tender, unsqueamish relationship with her mum has much to teach us as a society.  Somehow she found the wisdom and humanity to look steadfastly at what it is to be a failing mind in a wasting body and feel nothing but compassion, love and joy”. 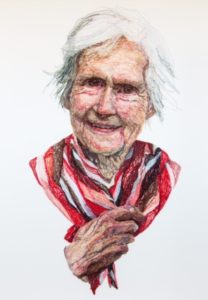 Not my words, but those of Nicci Gerrard, best-selling author and co-founder of John’s Campaign.  They sum up perfectly what the multi-media artist has achieved through her extraordinary Dementia Darnings – a series of large portraits of her mother created through running stitch and based on photographs from different stages of her life, including her final years with vascular dementia.

The idea for the Dementia Darnings came when Somerset-based Jenni became her mum’s carer, changing her, washing her hair, becoming more intimate with her.  Jenni wanted to support her mother while also continuing her own life, her work, her art.  When she realised that her mum still recognised loved ones through their photographs she realised that this could be the way. 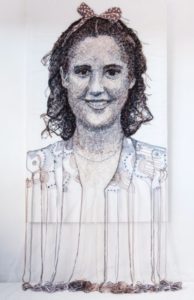 The pieces have an ethereal, fragile beauty – from some of them hang loose, trailing tails of wool that evoke the unravelling of the brain, losing one’s thread, mending and repair, the knots and tangles of Alzheimer’s disease, and the many and varied strands of life.

“I’m exploring loss,” says Jenni, who constantly questioned the meaning and motivation behind the Darnings.  Was she creating them to describe her mum’s slow deterioration, to honour it, to cause controversy?  Was she exploiting her mum?  She decides that if the work is done with compassion and love, that must surely be okay.

“As family members die or lose their memory, photos are all we have” she writes in the diary she kept as she worked.  “Their importance cannot be qualified, the image becomes the truth of our past.  And the work is about me too, and my place within the family as my mother fades.

“At the moment this work is the constant thread that binds my life together, stops it falling apart”. 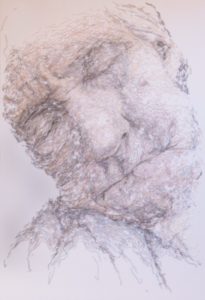 When her mum goes to live in a care home, Jenni feels bereft and wonders, “How will I unpick my life from my mum’s life?”  She takes photos of her mum in the care home as her dementia progresses and she becomes more frail.  Continuing the Darnings, Jenni realises, is a way to keep the two of them close.  “By working as hard as I do, it gives my life some validity, and also keeps my mum valued”.

The Dementia Darnings have been exhibited around UK, Dublin, the Hague and China, and will be shown in the US and Australia in 2022.   Their impact on those who came to see them before the Covid pandemic was profound and universally positive.

“Your Darnings to me are like a picture of love”, says a man called Phil.  “They reﬂect the gaze I think we all want to feel on us – accepting, not demanding, neither clinging hold of nor rejecting. I have often thought that in the process of dying that is what I want more than anything, but it goes just as much for living as well”.

Jenni’s mum died in 2015, aged 92.  Jenni describes this as the most profound experience of her life.  “No pain and no fight – just a glorious amount of gloriousness”.

Jenni is now working on a similar series about her own ageing called, wonderfully, The Absurd Sewn Selfies.  Having been so anxious about whether the Dementia Darnings exploited her mother she decided to turn her focus onto herself, a subject over which she need have no such qualms.

Though, very sadly, we can’t see the Dementia Darnings in the flesh (or wool) at the moment, I can’t urge you strongly enough to visit Jenni’s website: http://www.jennidutton.com/dementiadarnings.html 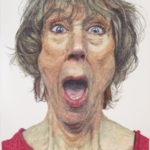 We Will Remember Them
The Professor of Hope