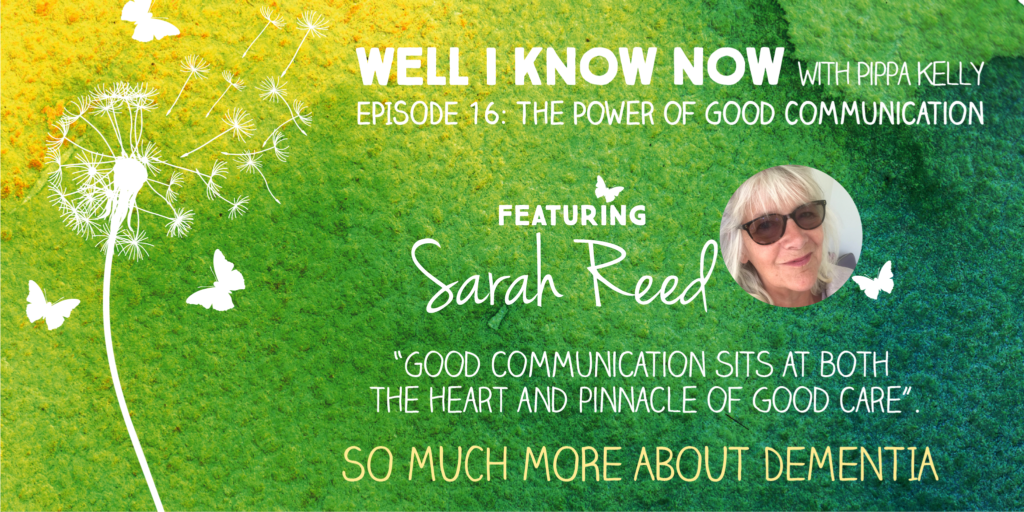 In 1998 Sarah Reed was an award-winning creative producer and single mother of two, when two events shattered her world.

The first was a brush with death when a burst appendix left her unconscious for nine hours in A & E, followed by a four-day stint in intensive care.  She spent the next three weeks recovering in a hospital ward overlooking a large London cemetery, an experience that made her realise that we’re all a long time dead, and left her questioning, as she puts it, “pretty much everything about my life”.

Four weeks later her dad called to say that her mum, Mary, had been diagnosed with Alzheimer’s disease.

Before the diagnosis she and her mum hadn’t been that close; Sarah had left their home in Faversham, Kent for art school at 16, since when her life had been busy, revolving around her demanding film work and bringing up her children.

Over the next decade, as Mary’s dementia progressed, a newfound bond developed between them.  “We learnt a new, more grown-up confidence with one another”, says Sarah.  In 2000 Mary moved into a care home.

Sarah soon realised that while kindly and well-meaning, the staff had little or no communication training – and her frustration developed into a passion to try to help carers provide better care.

Her mum was forced to move care homes twice and as Sarah’s knowledge of dementia grew she began to realise that staff couldn’t hope to develop a relationship with their charges if they didn’t know anything about them, and in order to find out about them they needed to be able to communicate with them.  Sarah resolved to do something about this.

At a personal level she compiled an album of photographs from her mother’s early childhood through to her years as a great grandmother.  When Mary saw the album she glowed with pleasure – although confused by the present, her mum was brought alive by the past.

And thus the idea for Sarah’s award-winning Many Happy Returns Chatterbox Cards was conceived.  Painstaking research into not just dementia, but compassion, philosophy and reminiscence therapy, led to cards skilfully designed to prompt conversations with older people.  Two thousand cards based around the 1940s were launched in 2008.  The sets sold out in three months.  Today, some 9,000 sets of 1940s and ‘50s cards can be found in care settings, libraries, schools and private homes around the UK.

Sarah went on to develop interactive communication workshops to help care staff communicate more meaningfully with residents.  She believes that “Good communication sits at both the heart and pinnacle of good care”.

Mary died in 2009, aged 92.   Dementia may have taken her mum from her, but Sarah tells me that it also, in a way, gave back.  “Caring for a loved one helps teach you a love you did not know was possible”, she says.  “It’s a feeling of understanding, forgiveness and, eventually, closure”.

RIP Dame Barbara Windsor
Bringing the Inside Out