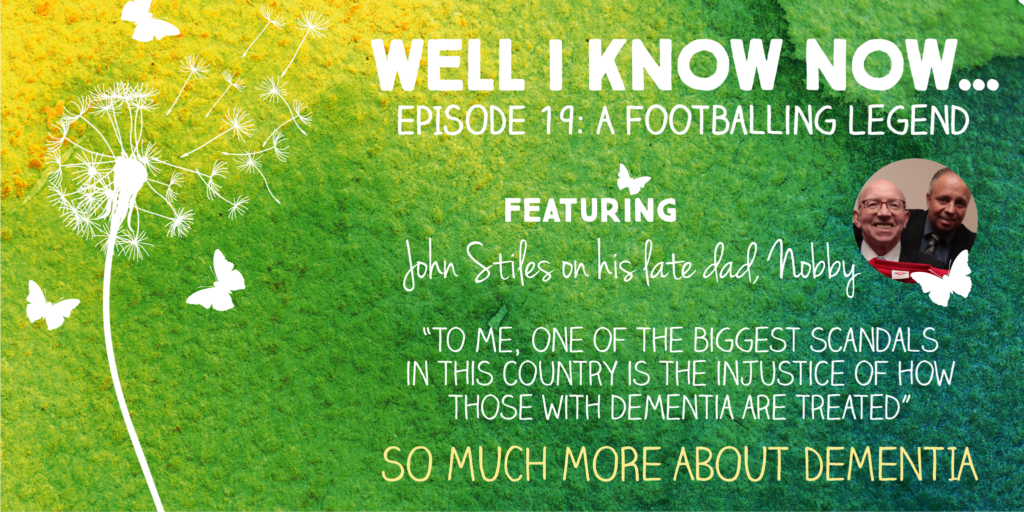 In this week’s episode John Stiles talks to me about his father, who died of dementia, aged 78.   Nobby Stiles was a legend.  It’s an overused phrase.  But he was.  I know nothing about the sport he played – he was a footballing great – but even I know his name.  Anyone over a certain age can’t fail to.

My mum adored him. She didn’t watch much football either.  But she loved the cheeky chappy with his famous gap-toothed grin who, having played every minute of England’s victorious 1966 World Cup, celebrated his team’s 4-2 win over Germany by dancing a jig on the Wembley pitch with the trophy in one hand and his false teeth in the other.

Norbert Peter Stiles was born in Collyhurst a working class suburb of Manchester.  The son of an undertaker and a machinist, he followed Manchester United, played for England Schoolboys at the age of 15 and, in 1959, fulfilled his childhood dream and joined his beloved team as an apprentice.

The midfielder earnt his first team debut a year later and was an energetic tackler, feeding his forward line of Bobby Charlton, George Best and Denis Law, helping them win the First Division title and catching the eye of England manager Alf Ramsey.

Stiles debuted for his country against Scotland at Wembley in April 1965.  But his aggressive ball-winning technique didn’t please everyone.  “I got slaughtered in the papers, absolutely slaughtered,” Nobby said, but he never let the criticism put him off.

And nor did the England manager, who threatened to resign when the sports governing body demanded that he drop Stiles for the 1966 World Cup quarter-final against Argentina following a robust challenge in the final group game against France.  Ramsey would later say that he had five world-class players and Nobby, a great reader of the game, was one of them.

A national star then, but also a hero in his home city of Manchester.  Stiles made almost 400 appearances for the Red Devils, helping them win two league titles as well as the European Cup in 1968.

His later managerial career never equalled his success on the field – John says his  dad was too nice to be a manager – and he had some low times.

Others though, saw his strengths.  United invited him to be team coach and in the early ‘90s he nurtured the likes of Ryan Giggs, Gary Neville and David Beckham from the academy to the first team.

But in 2002 Nobby suffered a heart attack and a year later, aged 61, he began to show signs of what was later to be diagnosed as a mixture of vascular and Alzheimer’s dementia.  As his health worsened so too did his finances and he was forced to sell his World Cup winner’s medal and other memorabilia.  At one point his bank card was declined at a cashpoint for insufficient funds. It seems almost unbelievable that it should come to this for such a sporting great.

Following Nobby’s death in 2020 the Stiles’ family are speaking publicly about dementia’s terrible toll on not just an individual but a family – and about the unfairness of a system that sees those with other diseases being given free NHS care while those with dementia have to pay.

Having long suspected that Nobby’s dementia was caused by the innumerable headings he made during his career, the family made the brave decision to donate his brain to research into the links between the disease and the sport. In an emotional Zoom call , neuropathologist Dr Willie Stewart, confirmed their fear.

The Stiles family may have been vindicated, but they are angry.  Because way back in 2002 West Bromwich striker Jeff Astle was named as the first British footballer known to have died from repeatedly heading the ball – and yet until recently no research has been done into the link.

“That’s almost 20 years of players – men and women – at risk with no restrictions.  Unprotected.  Uninformed”, says Nobby’s son John, himself a former professional footballer.  “There is a cancer in football of denial and defence. These players need help and they need it now.  And there’s been virtually no help. That’s a disgrace”.

Cycling Away From Dementia
Dadland

2 Responses to A Footballing Legend