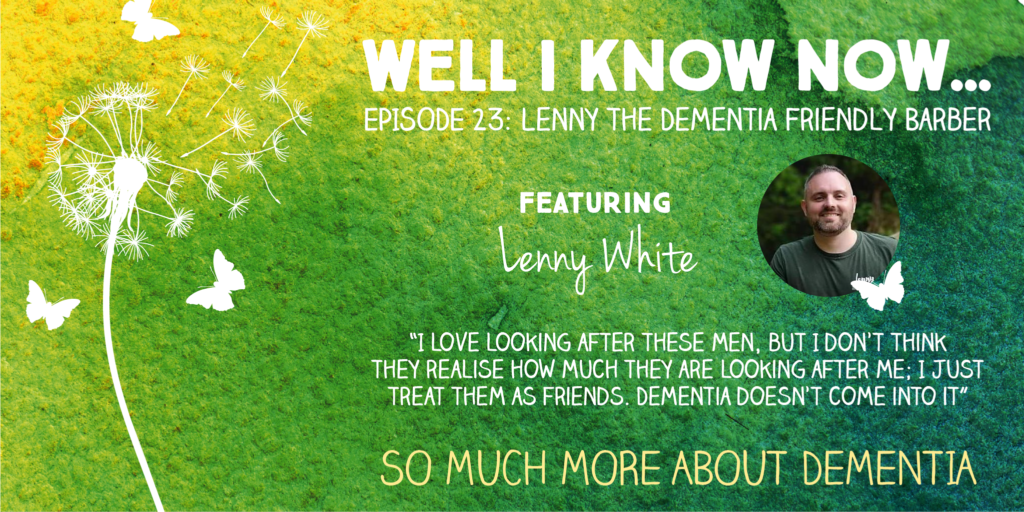 Lenny White, the world’s first dementia-friendly barber, lives in Northern Ireland where, at the time of recording, the date for the reopening of salons and spas had yet to be announced but it will surely be very soon. Before the pandemic hit, Lenny took his skills – and all the trappings of his cut-throat profession – around the UK and as far afield as America and Canada, setting up shop in two care homes in New York and cutting, pampering and wet shaving Auschwitz survivors in Montreal.

Lenny’s customers are all special. All live with disabilities or are vulnerable in some way, and he concentrates his considerable energies and passion on those with dementia. It seems a strange occupation for a man who worked in sales for 20 years. But from a young age Lenny has always enjoyed getting to know people; he was just 17 when he first worked in a care home as a kitchen porter.  Even then he liked to wander into the wards and strike up conversations.

So when, in 2015 he found himself re-evaluating his life after a divorce, he decided to return to the care sector, first as a carer and then as a care home barber. He’d realised that there wasn’t enough to occupy men living there; while many homes boasted women’s hairdressing salons, complete with soft, feminine (usually pink) touches, few if any had barbers.

Lenny completed a barber’s course while still working part-time in sales and started working in Kingsland Nursing Home in Bangor, as both a carer and barber. When he posted some of his pictures and stories online they caught the attention of the Alzheimer’s Society, who suggested that he attend a dementia-friendly course. He duly did, thus officially becoming Lenny the Dementia-Friendly Barber and utilising to great effect his twin skills of caring and grooming – there’s a particular way to cut the hair of people confined to beds and wheelchairs.

Before Covid locked us all down Lenny was visiting well over 50 care homes, as well as hospitals and day care centres, returning every six weeks with his mobile salon, setting up his candy-striped pole, his juke box full of Frank Sinatra and Dean Martin, his old-fashioned posters and paraphernalia, scenting the air with a spritz of cologne and Old Spice aftershave and treating his all-male customers to the full barbering experience.

“Men love getting together with other men and having a bit of a banter”, says Lenny. “Just because someone has dementia it doesn’t mean they have to lose out on things like this, in a sensory environment”.

Lenny’s learnt a lot from people living with dementia, explaining that he meets them, “where they’re at”, slowing himself down and becoming more patient. And he regards it as a privilege to get to know the individuals and their families, sometimes giving head massages and haircuts to men nearing the very end of their lives.

In 2017 Lenny’s inspirational, pioneering work was recognised by the Northern Ireland Alzheimer’s Society when he was honoured for his outstanding contribution at the Dementia Friendly Awards.

For Lenny though, the rewards and support definitely work both ways. “These men are waiting for me and I love looking after them,” he says. “But I don’t think they realise how much they are looking after me; they definitely help me – I’ve found a purpose in looking after them. I just treat them as a friend. Dementia doesn’t even come into it; I just see them for who they are”.