It was my husband’s idea.  He was having a marquee erected in the garden one weekend for a Saturday event he was hosting and suggested I use it on the Friday evening for a cause close to my heart.  It took me less than a minute to decide that we would hold a fundraiser for Sage House, our local dementia support hub.

For those who don’t know it, Sage House is in Tangmere, West Sussex.  When I visited I was met by Sally Tabbner, the charity’s chief executive, and Ronnie, a volunteer whose late wife Dolly lived with dementia.  Ronnie, who was later to steal the show at our fundraiser with his heartfelt speech about all that the charity had done for him and Dolly, chatted away as he served us tea at Daisy’s café. 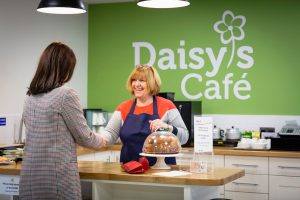 Daisy’s café sits at the heart of Sage House and in many ways exemplifies all that it stands for.  It is bright, welcoming and properly dementia friendly, with carefully chosen colours, contours and lighting.  People working in the neighbouring businesses and local residents are encouraged to use it, at a stroke helping to diminish the sense of them (with dementia) and us (without).

Sally explained that the hub is designed to wrap around those with the condition and their families so that they don’t ping-pong around the care systems.  It was the brainchild of two local people, one of whose father had dementia and was struggling.  The pair set up a feasibility study with a consultant, focus groups, the region’s mental health trust and, crucially, those with dementia to see what would be helpful. They discovered that time and again individuals who were given a diagnosis didn’t know where to turn for advice – and so the idea for a dementia hub offering different services under one roof, was born.

Housed in a renovated former Virgin call centre, Sage House was officially opened in 2018 by the Countess of Wessex.  It was run by 15 employed staff and five volunteers; today it has 35 staff and 22 volunteers. 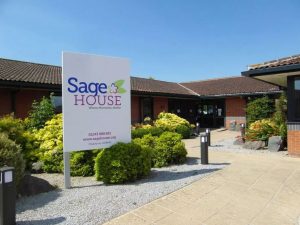 Four different coloured zones simplify the various areas and enable people with dementia to navigate the building independently; ceilings have natural light tunnels to avoid scary shadows; there are therapy rooms where consultants offer therapies from Reiki to massage and hairdressing; activities range from singing, reminiscence, art and quizzes.   The Smart Zone enables you to sample the latest dementia-related IT innovations, from GPS trackers and telecare to medication dispensers.  The local mental health trust has the use of five rooms and the hub offers a memory assessment service.

Children from Tangmere primary school visit the hub and work on allotments with people with dementia, making Sage House an intergenerational place, always a winner for me.

A Wayfinding scheme gives individuals the chance to talk to a professional who can advise them throughout their dementia experience, from pre-diagnosis to the later stages.

None of this comes cheap.  The hub must raise £1million a year; it receives £32,000 a year from West Sussex County Council, as well as funds from local businesses, solicitors (who run financial and legal advice clinics on site), the Citizens Advice Bureau, Age UK and Mind.

Our small garden fundraiser made its own financial contribution. But more than this the evening raised awareness of the hub among our neighbours and friends, and brought us together after a difficult year and a half.

Only this week the best-selling author Wendy Mitchell, who happens to live with dementia and writes Which Me Am I Today?, one of the best blogs I know, described with characteristic verve her recent village get together in Yorkshire.  It involved, among other things, Prosecco Girls with buckets of fizz, local gin being sold from a horse box, live music and bouncy castles.

Wendy had been worried that after the long months of Covid lockdowns, community spirit might have faded but her wonderful village proved her wrong.  We humans love coming together. 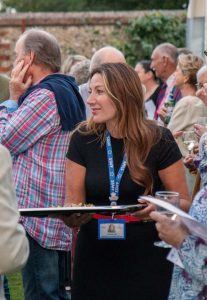 Back in West Sussex, kind neighbours helped me string borrowed bunting across the drive, we festooned the garden with lanterns, laid out canapės and gave Bert and new puppy Reggie strict instructions not to bark during the speeches or escape through the gate (both of which orders both dogs ignored).

Not wanting to pressure hard-pressed local businesses to cough up cash, we asked them for auction donations consisting of precious time and thoughtfulness instead.  And they all came up trumps.

Our local, hugely talented artist whose works sell for thousands of pounds offered to create a portrait, person or pet for the winning bidder; our garden designers, an advice session in the winner’s own garden; our florist, a free Christmas wreath-making class; the ex-clerk of the Goodwood racecourse, a guided tour of the course; our resident horsewoman, a lesson  in equestrian skills; our vintage car owner, a jaunt in her classic Rambler Rebel.  We raised, to our amazement, £3,300.

We also raised our spirits.  We raised awareness of a fabulous cause.  We all came together and – surprise, surprise – we loved it!  This is what we humans are all about.

And yep, we’re holding another fundraiser next year. 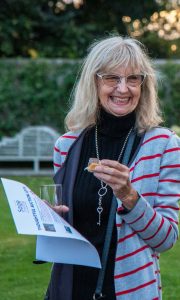 Jeannie, who donated a ride in her vintage Rebel Rambler