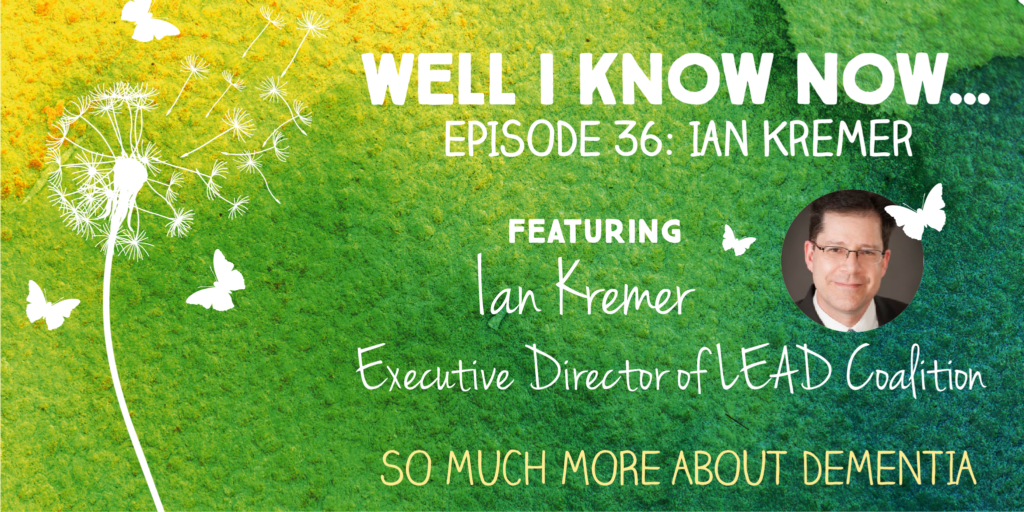 Ian Kremer is an American who has worked for over 25 years on his country’s dementia policies.  A member of both the Virginia State Bar and the American Bar Association, he was a director of the Alzheimer’s Association focusing on state and local policy in Virginia, Maryland and the district of Columbia for 16 years before moving to head up the Washington DC-based LEAD Coalition in 2012 – LEAD stands for Leaders Engaged on Alzheimer’s Disease.

LEAD is a national coalition of over 200 member and allied organisations – from charities, pharmaceutical companies, neurological societies, academic and research institutes, healthcare and homecare providers – all of whom work to raise awareness of dementia and accelerate progress in three fields – the first, care and support; the second, detection and diagnosis and the third, research into prevention, treatment and cure.

In his ten years as LEAD’s executive director, Ian sees his biggest achievement as (mostly) – his qualification – unifying the community of dementia advocates which was very fractured when he joined the coalition.   Now, he says, though they don’t agree on everything, the community agrees and collaborates on most and, importantly, it has productive and open lines of communication even when there are disagreements.

This strength in unity has brought some great results, such as a whopping 700pc increase in dementia research funding at America’s medical research agency and what Ian describes as a substantial expansion of the public health approach to dementia – which I’d like to talk to him about when we get going.

On the podcast Ian and I explore the similarities and possible differences that exist between our two countries in the way we view and treat those with dementia and their families and carers. We discuss the extent to which stigma still lingers over the condition in America, as it does here, and whether the level of awareness and knowledge of dementia has increased in the US. And we chat about the importance of the language used in descriptions and discussions of it.

Ian tells me that for as long as he can remember he’s lived his life by two maxims: Tikkun Olam, which roughly translated from the Hebrew means to “repair the world” and Martin Luther King Junior’s words, “the arc of the moral universe is long, but it bends towards justice”.  Which is something we all need to hear right now.

Ian is true to his beliefs.  As well as his national role at the LEAD Coalition he holds over a dozen volunteer posts in health, dementia and care. He participates in several national steering committees, including a research summit on care and support for those with dementia and their carers, and he’s a member of the executive committee for dementia friendly America.

In an interview last year he explained that, while the LEAD Coalition focuses on US federal policy, he doesn’t like silos and is keen for the coalition to collaborate with all – “Everyone sees the movement from their perspective,” he said, “We want to lift all boats”.

He also talked of highlighting what people can do, not what they can’t, and his belief that this works not just for those with dementia, or for those who are old, or from a work perspective, but for life and for ourselves – which really struck a cord with me and reminded me of the maxim that what works for people with dementia, generally works for all.

“For me”, Ian told me, “working with and for people who have dementia is just one way I can contribute towards repairing the world and helping to accelerate the bending of the moral arc towards justice”.