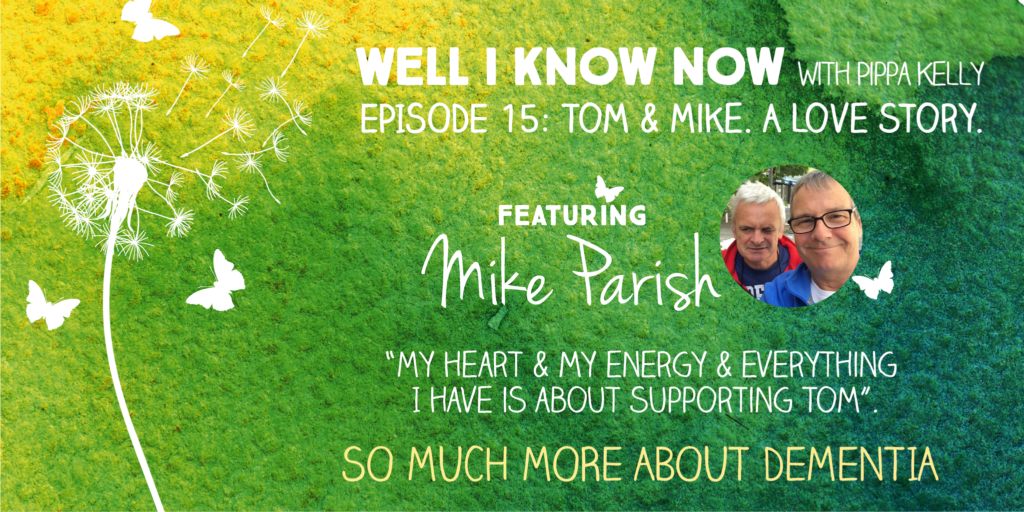 Mike Parish and Tom Hughes have been together for 45 years.  Theirs is a love story, and I’ve found researching their lives, witnessing the tenderness, concern and pride that flows between them – very moving.  And a reminder of the beauty to be found in us flawed human beings.

But their story also has an ugly side.  For much of their lives these two men have been the victims of prejudice, rejection, violence even.  One of them still bears the visible scars.  The unseen, emotional cuts run deeper still and have lingering consequences.

Five years ago Tom was diagnosed with dementia.  He can no longer speak, he loses his way.  Mike, his lover of almost half a century, holds his hand to guide him.  The painful irony is that for decades into their relationship this couple daren’t hold hands in public because they’re of the same sex .

Now, in different ways, they find themselves yet again confronted with discrimination. It’s not aggressive this time, or even intentional.  But it’s there, in the preconceptions voiced as they attend countless medical and social care appointments, where they are routinely assumed to be father and son or a carer and his charge.  In constantly explaining who and what they are they face a sort of endless coming out.

I would love to have chatted to both of them, but Tom is now non-verbal and in these strange Covid-19 times it simply didn’t work when we tried to include him in the podcast.  It is so sad, but it reveals the stark truth about dementia: it’s a progressive disease, and there’s no getting round that.

But as Mike and I talk, Tom is never far away.  Mike says he and Tom are true soul mates, telling me about the Greek myth that lies behind the phrase – that we humans were originally created with four arms, four legs and a head with two faces.  But Zeus split us in two, so we’re all searching for our other half.  To complete us.

“When the two halves meet there is an unspoken understanding of one another, they’re unified and know no greater joy,” says Mike.  “This was what we both felt when we met, and still do”.

It was in 2008 that Tom, an NHS pensions manager with an astute mathematical brain, began to experience memory problems.  Five years earlier he’d been diagnosed with HIV but medication had kept him well.  However by 2011 his worsening symptoms, including trouble understanding new tasks, forced him to retire.

There were other signs that things weren’t quite right: teaspoons continually went missing (it transpired Tom was throwing them away), while bottles of handwash kept appearing, at one point there were 23 under the sink.  Finally, when they went out to a restaurant and Tom ordered only for himself, Mike knew he could no longer ignore the signs, and in 2015 Tom was diagnosed with HIV-associated neurocognitive disorder, or HAND, a very rare form of dementia.  Soon afterwards Mike gave up his job with the fire brigade to care for him, experiencing what he describes as a tsunami of shock and grief.

It’s been through telling their story that he and Tom have found a way to move on.  They started by sharing their experiences with dementia support groups and were soon invited onto national television and radio, and to speak at universities, hospitals, care homes.  Being a same-sex couple experiencing dementia proved relatively rare and Mike felt a responsibility to reach out to others.  It turned out to be of huge benefit to all.

“There’s a powerful positive outcome from storytelling,” says Mike.  “It comes from the hope that what you’re doing may help others and it also gives a sense of normalisation, validation and the strength to carry on”.