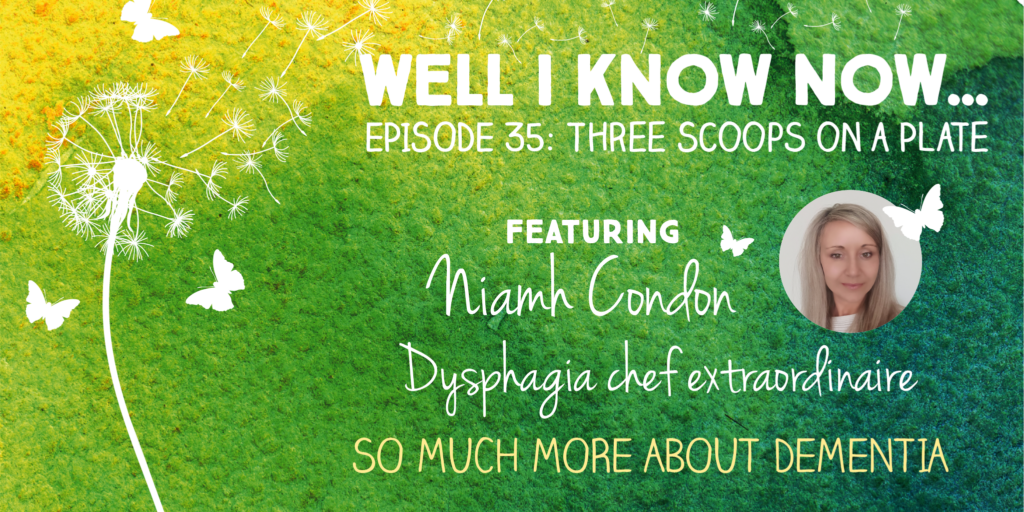 Niamh Condon has long believed that food is far more than fuel for the body. Coming from a large Irish family, she’s always loved to cook and has known from a young age that sitting down for a meal together brings people close, it connects them and warms them, it comforts them, it nurtures relationships and binds societies.

Niamh has worked in the catering industry for over 20 years. In 2014 she began cooking for older people and encountered the challenges faced by those who find it difficult to swallow (for which the technical term is dysphagia) and whose meals have to be pureed.

At a nursing home in West Cork she was asked to blend food separately and serve it up with an ice-cream scoop. She recalls plating up a white scoop, a green scoop and a brown scoop for a woman who understandably thought it was ice-cream, but on eating it found it was hot, savoury and salty – not at all what she expected. The woman threw the plate on the ground and refused to eat it.

The incident inspired Niamh to get piping. Now she is known for her fabulous pureed creations – from fish and chips to lamb shanks, scones and jam, bacon and cabbage, and scrummy cakes, Niamh’s dishes look and taste like what they are. And funnily enough, once people are given food that looks, tastes and smells as it’s supposed to, they are far more likely to eat it. Hardly rocket science.

At the end of 2019 Niamh launched her own business, Dining with Dignity, creating appetising, visually appealing pureed food using special moulds provided by an Australian company and training other care home cooks homes to do the same. Her timing was, to put it mildly, unfortunate. Just around the corner, as we all know now (to coin a phrase), lurked Covid; and in the early spring of 2020 Ireland, along with the rest of the world, went into lockdown. Not before the Irish Times identified Niamh as one of their 50 People to Watch in 2020.

And there have been golden moments over the past two frightening years, one of which involves a truly fabulous Golden Anniversary chocolate cake that Niamh created for Denis McCarthy and his wife Ann, who lives in a nursing home, of which more later. Warning: get your tissues ready, it’s a tear-jerker of a story.

Now that, hopefully, we’re beginning to get back to normal, Niamh is ramping up her business again. Though to Niamh, it’s far more than a business. She is passionate about exposing the struggles, stigma and exclusion faced by those with swallowing difficulties. Imagine going into a room, she tells me, where everyone is split into two groups. One group is offered tea, coffee, biscuits and made to feel welcome, the second group is simply ignored – that’s what it’s like when you can’t swallow. You feel isolated.

“I set out to try and help as many chefs cooking for people with dysphagia as I could,” says Niamh. “I wanted to help those sitting around the table facing three scoops on a plate”.

For me, Niamh’s cooking, her understanding and preparation of food, hold many valuable messages – not just about people with swallowing difficulties or even the ethos of care homes and the havoc Covid wreaked as it split families apart – but about what eating and sharing meals mean to us all, what they bring to us. There’s an almost philosophical aspect to what Niamh does that speaks to the way we live our lives.